Stevie "Fast" Jackson will have his hands full as he attempts to defend his Chevrolet Performance U.S. Nationals title over Labor Day weekend. The racer is hunting down his first NHRA world championship with Todd Tutterow, Jose Gonzalez and a stacked Pro Mod field on his heels.
26 Aug 2019
Jacob Sundstrom, NHRA National Dragster Associate Editor
Feature

Stevie “Fast” Jackson can smell blood. He holds a 133-point lead with four races remaining in the E3 Spark Plugs NHRA Pro Mod Drag Racing Series season. Jose Gonzalez, his closest competitor in the standings, needs to pull off a miracle to catch Jackson by the time the fastest doorslamming cars in the world reach The Strip at Las Vegas Motor Speedway in late October.

The Chevrolet Performance U.S. Nationals, which is presented by Hot Wheels, is the ninth of 12 events during the 2019 E3 Spark Plugs NHRA Pro Mod Drag Racing Series season and will be shown on Fox Sports 1 (FS1) and Fox Sports 2 (FS2).

Jackson's no stranger to winning, but doing it on this stage is new to the Georgian. Pro Mod gets much of its fanfare because of its parity at the bottom of the category — the bump spot is as cutthroat as any famous pirate ship. That has shown to be true at the top of the high-performance class with one exception: Jackson has held serve for much of the season. 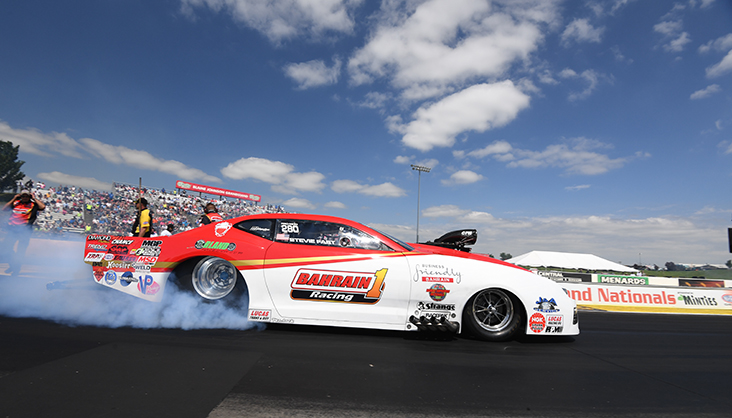 Good fortune has played a role as well, but Jackson boasts the quickest average elapsed time in the class at 5.771 seconds. He also gets down the track 70.4% of the time. That’s not quite up to the high bar set by Todd Tutterow, who has not lost a step since a massive crash in Topeka, but it’s stout in a category known as much for wild rides as it is for hot laps.

Jackson also has just one red-light to go with a .034-second reaction-time average. That’s best in class among full-time drivers (Tutterow, Sidnei Frigo, and Brandon Snider are among his toughest competition) and shows how diverse his talents are. It would be enough if he showed up with a great car, but he continues to drive the wheels off every piece of equipment he hauls to the starting line.

Tutterow and Jose Gonzalez headline the field of challengers making a run at Jackson not just for the Pro Mod title but for the Chevrolet Performance U.S. Nationals crown. Gonzalez handed Jackson his most recent defeat in NHRA competition, and Gonzalez is the most recent runner-up on the NHRA tour at the Summit Racing Equipment NHRA Nationals in Norwalk. 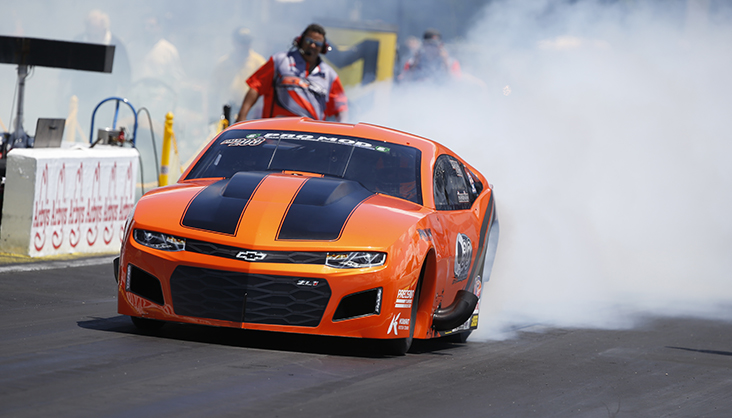 He heads to Indianapolis second in points and third in NHRA Power Rankings (77.77) thanks to a 5.803-second elapsed time average and the second-fastest average speed in the category (256.55 mph). That combination makes Gonzalez a threat to win every time he arrives to the track, but he remains a longshot, like everyone else in the category, to run down Jackson before the Dodge NHRA Nationals Powered By Pennzoil in Las Vegas in October.

The parity in Pro Mod also makes it unlikely someone will catch a front-runner. Jackson is the only racer with multiple victories in 2019. That will almost certainly have to change for someone other than Jackson to pick up the big check at the end of the season. If Jackson continues on his current pace (a little better than a semifinal appearance every race), Gonzalez essentially must win every race, and Tutterow is already out of the picture.

The solution? Make sure Jackson doesn’t reach the semifinals every race. Easy, right?

Jackson returns to Indianapolis as the defending event winner, which came in dramatic fashion. He may have the working-class drawl of a Georgian, but nobody can deny his showmanship. A final-round wreck at the four-wide event in Charlotte put his primary car out of commission for the remainder of the 2018 season, forcing him into a backup car. 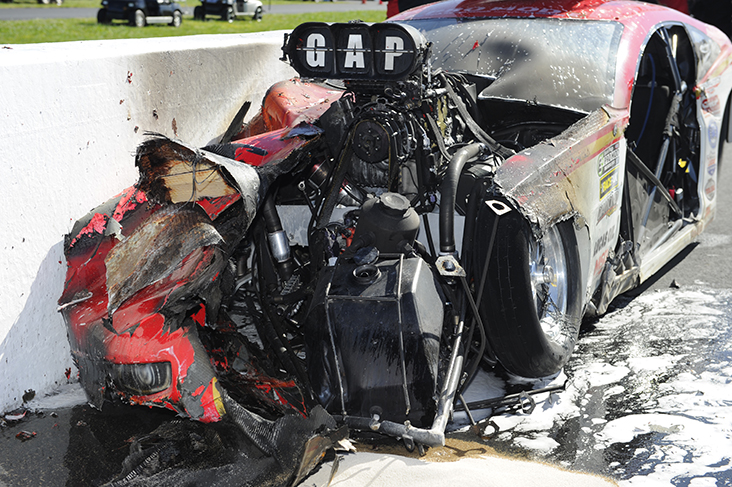 Turns out, the backup car had enough magic to turn on four win lights in one of the biggest drag races of the year. Jackson needed a Hail Mary pass to get into the field in the fifth and final qualifying session and a little more magic to get by Gonzalez in the final. The Shadow 2.0, as Jackson dubbed it, ran a 5.848 to slide into the No. 13 spot. Then, Jackson cleaved his way through the field.

He defeated Frigo, Mike Janis (the eventual champion), and Mike Castellana (the 2017 champion) to set up a matchup with the man chasing him for the 2019 championship. Both racers pedaled their cars after losing traction, with Jackson getting the best of the rider to the strip. A pair of six-second markers is not what either racer was looking for, but the U.S. Nationals Wally means more than anything printed on a thin strip of paper.

Another win in Indy would all but lock up the championship for Jackson, who placed fourth in 2018. No lead is safe in racing, of course, and certainly not in Pro Mod. Everyone is a junked race car away from vulnerability, and Jackson knows that as well as anyone; but the visor-sporting, trash-talking Georgian has more or less done what he set out to do: conquer one of the most difficult classes in a difficult sport.

Don’t expect Jackson to hang on for dear life over the next four races. He doesn’t know how.