Weary of sleepless nights and anxiety-filled days in the ultra-competitive Pro Stock class, Drew Skillman has traded those for well, the same ultra-competitive atmosphere that now permeates the SAM Tech.edu Factory Stock Showdown. Accompanied by his father, Bill, the Skillman Auto team arrived in Gainesville with a pair of supercharged Cobra Jet Mustangs and steamrolled the Factory Stock field. Bill was the No. 1 qualifier in the record 31-car field, and Drew finished the job with a string of record-setting elapsed times in eliminations. He capped off a record-setting weekend with a 7.736 to 7.887 win against defending Gainesville champ Stephen Bell in the final round. After winning on Sunday, the Skillmans will now return to their Indiana-based auto dealerships to sell on Monday. 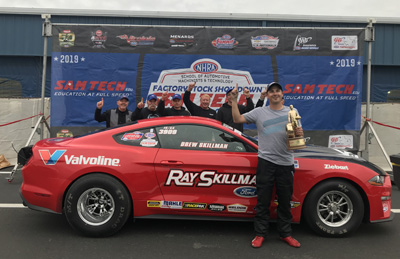 “This class is no joke,” said Skillman, who now has wins in Pro Stock, Super Stock, Stock, and Factory Stock. “We never thought it would be easy, but this [Factory Stock] has gotten competitive, really fast. It’s every bit as competitive as Pro Stock. Ford built us a hell of a car here. This is one of the 50th anniversary Cobra Jets and we put it together in five weeks. We take this very seriously and our crew has worked really hard to refine our suspension and get the car just right. All that hard work paid off. I think we’ve got a car that can contend for the rest of the year.”

Cobra Jet Mustangs occupied the top five spots in qualifying and Skillman was fifth-quickest with a 7.829. He continued to pick away at the supercharged engine combination in each elimination round. Opening with a 7.759 to beat Leonard Libersher’s COPO Camaro, Skillman raced his father in the quarterfinals and the Skillman’s put on a clinic with the quickest side-by-side race in the history of the class. Drew prevailed, 7.733 to 7.736 in a battle that was decided by .004-second at the finish line. Skillman wasn’t done. He bumped his own elapsed time record again with a 7.718 in his semifinal win against Randy Taylor, who spun the tires in his COPO Camaro.

“You never want to have to race your dad, especially so early but coming from Pro Stock, we’re not really used to the sportsman-style ladder that they use here,” said Skillman. “We’ll work harder to address that in the future and hopefully we won’t have to race in anything other than a final round.”

Using engines supplied by former Pro Stock racer Greg Stanfield, runner-up Bell was very competitive with a 7.856 in qualifying that was good for the No. 8 spot. He made his way through the field on Sunday with wins against Pete Gasko Jr., and Ryan Priddy, who is driving the new COPO Camaro fielded by Mountain View Racing team owners Nick and Irene Mitsos. Bell also defeated Carl Tasca, the uncle of nitro star Bob Tasca III.

Based solely on pre-season testing results, it was evident early on that the 50th annual Amalie Motor Oil NHRA Gatornationals, would be like no other event in the SAM Tech.edu NHRA Factory Stock Showdown. The race more than lived up to the hype. It took a 7.91 just to qualify for the record 16-car field and the high flying field of Mustangs, Challengers, and Camaros electrified the capacity crowd.