Ryan Oehler worked until 4 a.m. the night before the Route 66 NHRA Nationals, his hometown race. There’s grease on his face when he appears in the showroom of AirTec, Inc., the family business of the Oehlers. How they ended up running a heating and air company in a suburb two hours south of one of America’s great cities is a very long story.

Matter cannot be created nor destroyed — it can only be changed. When a set of cylinder heads show up in Bloomington, Ill., they’re a source of untapped potential. That’s where the Oehlers make their bones. Brad Oehler became a horsepower alchemist in the 1970s and was heavily involved in the Pro Stock category. 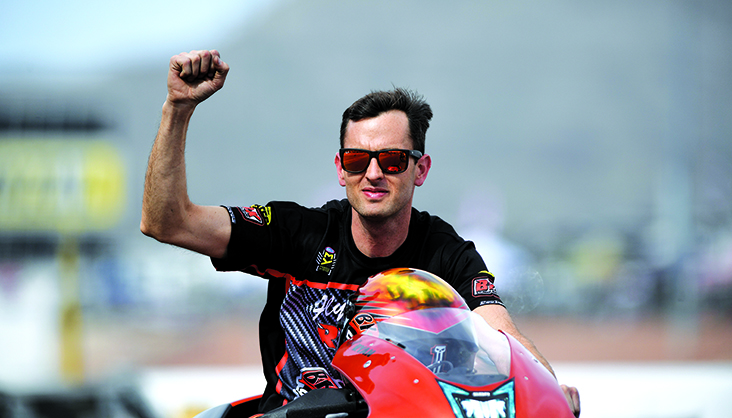 “He started doing rear end work and then started working with chassis builders,” said Ryan Oehler, his face now free of grease and animated as he talks about the work of his father. “He started working in Pro Stock cars. He was the fourth person in the world to have a flow bench from SuperFlow. He basically learned the science of engine flow and how to use one of these things, and he became a self-taught engine builder.”

That led to a life-long love affair with head flow and cam development. Oehler was in the process of putting together a Pro Stock car when the category moved to the Camaro. That left him with a half-finished car and a short runway to adapt. So began the next phase of his drag racing career: motorcycles. Oehler sold his Pro Stock car, bought a Harley-Davidson, stripped it clean, and got to work.

Andie Rawlings earned the first round-win of her career at the Route 66 NHRA Nationals. Oehler lost to Karen Stoffer by a tenth of a second. Rawlings caught a break against Andrew Hines, whose bike bogged at the starting line, but that’s not the point. Rawlings needed Oehler’s help Wednesday, just two days before the first round of qualifying.

She showed up after 6 p.m. with a new chassis because of an accident suffered on her previous bike days before. Oehler had worked a full day at AirTec (all his days at AirTec are full days) and needed to prepare for his own race weekend. He was at the shop with his team, a small group, including Alex Tutt, helping a competitor prepare for a race.

“I like to help people,” said Oehler. “I want to see her do better. She’s a good person, and right now, at this point … I was here anyway, and honestly, they really just needed a roof.”

A lot is made about the camaraderie in Pro Stock Motorcycle. There are group autograph sessions, they frequently parade back to the starting line after qualifying, and at least offer the appearance of polite friendship. But anyone who’s backed out of helping a friend move knows the difference between dapping someone up at the starting line and pulling an all-nighter to help create a memorable Sunday moment. 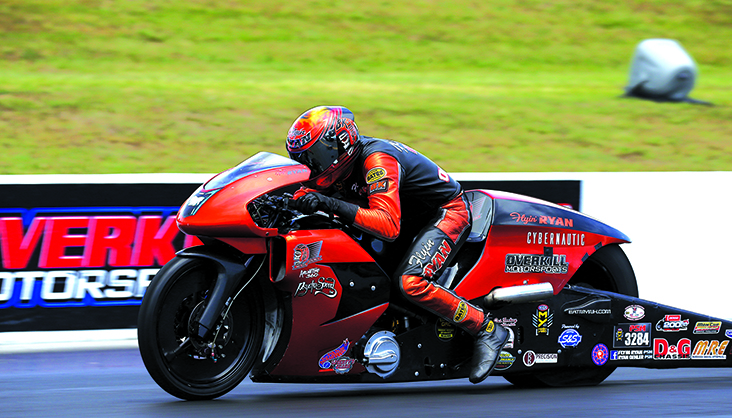 Oehler averages the fourth fastest speed in Pro Stock Motorcycle. That shouldn’t happen for a team that builds its own engines in its second full-time season. Of course, it’s very cool that it does, and everyone is very happy for him — but then there’s what happens on the back end. The tenor of the conversation between competitors changes over the course of a career.

When Oehler first showed up at the Gatornationals and announced himself as a prospective competitor, he got a wide array of reactions. Some, like Steve Johnson, accepted him — in a very Johnson way. If you know, you know. Others didn’t give him the time of day. As he proved himself competitive, the opinions moved toward respect — and that’s when the helpful handshakes begin.

“I think there’s a lot more respect coming our way,” said Oehler. “Before, it was just, ‘yeah, you’re a nice kid, whatever.’ I think there’s some understanding that we’re not just running a bike that we bought, but that we’re also developing some stuff. I think it’s also changed to where, like … guys aren’t necessarily going to come over and lend a hand like they did last year. I’ll call them, and I’ll try to get information, but… it’s not like it was.”

The transition from curiosity to threat happens quicker than a gear change in a Pro Stock Motorcycle. No one is obligated to help a competitor, obviously, but your friends can turn to frenemies very quickly — and without much warning.

Oehler recalls seeing thousands of heads in his dad’s shop at its peak. Too many. The orders came in too rapidly for Brad to keep up with them. He didn’t want help because he didn’t want to sacrifice quality. He didn’t want to turn down orders because of the revenue it brought in. Eventually, Brad expanded the business and brought on help. 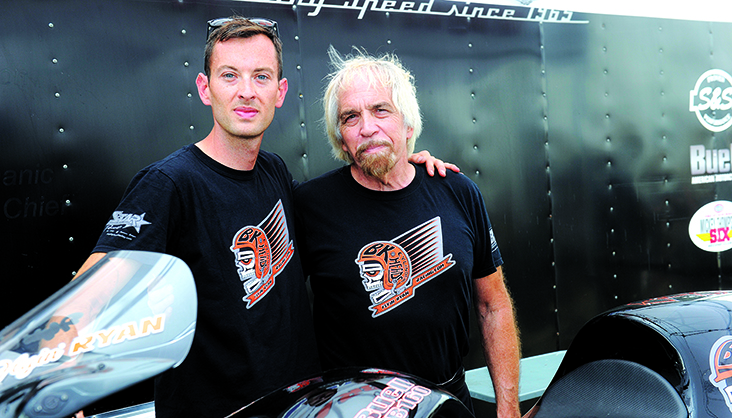 “I’m seeing all this, us kind of being hardcore into racing on a lot of levels, and… things just kind of went downhill,” said Oehler. “Eventually, we get into heating and cooling and just park the race team. My dad can do anything with his hands. He’s an electrician, he’s a fabricator, and he can read. Our neighbor ran a heating and cooling business and basically asked him to run it.”

That decision effectively put Ryan through college at Illinois State University, where he was an IT major. College was always a prerequisite if Oehler wanted to go racing. He grew up surrounded by racers — Oehler refers to them as “Harley guys,” who gave him a lot of advice on “what not to do.” The one positive piece of advice: Go to college. He did that and returned to take over what became the family business — and it has kept him extremely busy.

Oehler didn’t know what many in the room already did. He wasn’t the Automobile Club of Southern California Road to the Future Award winner. The only reason he competed in the final handful of races in 2018 was in a bid to secure the award. He put on a brave face when the announcement came, but it was a disappointment. It also served as motivation for 2019.

“I didn’t earn it, but it was close, is how I see it,” said Oehler. “The Pro Mod Harley [which he raced in American Motorcycle Racing Association] taught me a lot. I came in and chiseled it all the way down and kind of felt like I learned a lot of life lessons. Going through that and eventually becoming the best in that series and knowing I was going to win when I showed up to then coming into NHRA and knowing I was going to get my ass kicked when I showed up, and knowing that was going to happen for a while… that’s just how it is in that group. And then after a while, I know I’m going to be the one kicking ass. I know we can do it. It’s science. That’s all it is.”

The AirTec office sits in a former car showroom. It’s carpeted, and the walls are almost completely glass. Oehler’s office serves as a storage closet. He apologizes three times for the mess before showing off his pride and joy — the race shop. Spotless in contrast to his other office, the expansive garage shows off his motorcycles from his other racing ventures and his first drag car: A ’97 Camaro.

It sits directly across from the trailer that hauls Oehler’s race equipment. That has been a sore spot for the team this season. It caused problems prior to the Virginia NHRA Nationals, and it wasn’t starting Thursday morning; it also caused the grease mark on Oehler’s face, though Tutt good-naturedly intimated he might have been putting on a show for the media.

Oehler won back-to-back championships in the AMRA Pro Modified series before moving to the NHRA Pro Stock Motorcycle category. He did everything himself in AMRA, and he knew he couldn’t get away with that approach in one of the most competitive racing categories in the country.

“I used to start my own bike, kick the starter away, make my pass, and then come back and get the starter,” said Oehler. “That wasn’t going to fly in Pro Stock.”

As the operation in Bloomington grows, so do the results. Oehler is 5-6 through six races after winning only two rounds in all of 2018; and that’s with a 60-foot average that has frustrated the upstart team. There’s more on the horizon, too. The team has a chassis dyno, a new engine dyno is on its way, and Brad no longer travels to every race.

That sort of freedom makes everything better. Oehler isn’t expected to contend for the 2019 championship, but given how quickly the team went from finishing second in rookie of the year voting to grabbing top speed in Atlanta … is it so far fetched to think he could make noise?

“All we’ve done is build these engines better,” Oehler said. “You’re really watching how everything is working. You can see there are all these little problems that are just fit issues or alignment issues. It wasn’t that we developed a brand-new head or flow profile. We just did a better job making sure that everything is up to its best ability.” 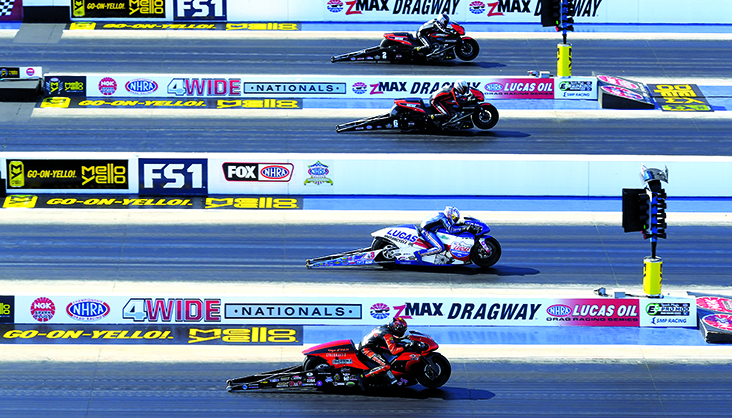 Oehler is on the verge of eclipsing 200 mph and joining the Denso Spark Plugs 200-mph Club. He says that’s not at the top of his list. He left Chicago seventh in the Mickey Thompson Pro Bike Battle standings. That got his attention. Still, he took a pause and reaffirmed his commitment to one goal.

“I’m out here to win Wallys. That’s the only thing I care about.”

That first win? It’s not far away.