For Ron Capps and Rahn Tobler, No. 1 qualifiers are nice, but they're all about the win

Ron Capps’ biography and racing record spans five pages in the 2019 NHRA Media Guide, filled with the facts and stats of a career that now spans more than 540 races.

His numbers are impressive: 63 events wins and 120 final-round appearances -– both second on the all-time list behind John Force -- and a 731-460 win-loss record. The only seemingly disproportionate stat is No. 1 starts, which stood at just 22 entering the season, just 11th on the all-time list.

That final number ticked up a notch in Norwalk after a superlative qualifying hand that included four straight three-second runs – including a polesitting 3.88 recorded Friday night, the first for a Don Schumacher Racing Funny Car this season -- and 10 of a possible 12 session points. He and crew chief Rahn Tobler had the best runs of the first and final qualifying sessions and were second in Q1 and Q3. 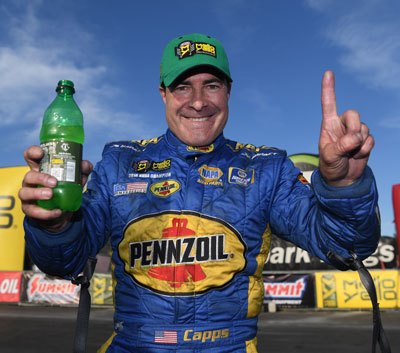 Capps’ final pass of qualifying, a 3.912, was the best of the session, supplanting the 3.914 of Paul Lee, whose car is tuned by Jim Oberhofer but runs Tobler’s tune-up.

“It’s just so much fun right now,” added Capps. “I don’t want to get cocky or overconfident, but Tobler definitely has had an extra pep in his step.”

Capps is running beneath the shell of the same NAPA/Pennzoil car with which he won in Seattle last year and given his success with special NAPA paint schemes –- he won Atlanta and Richmond this year in a NAPA Brakes scheme -– he’s hoping for more Sunday success in Norwalk.