One came to fame as a teenager ahead of his prime and the other with a sponsor that was ahead of its time, but this week we mourn them together with the passings last weekend of NHRA pioneers Bobby Vodnik and Frank Oglesby.
28 Mar 2019
Phil Burgess, NHRA National Dragster Editor
DRAGSTER Insider

One came to fame as a teenager ahead of his prime and the other with a sponsor that was ahead of its time, but this week we mourn them together with the passings last weekend of Bobby Vodnik and Frank Oglesby.

Neither name might be familiar to newer fans of the sport, but those of us with deep roots and respect for the past knew them well, and both were past feature subjects in this column. 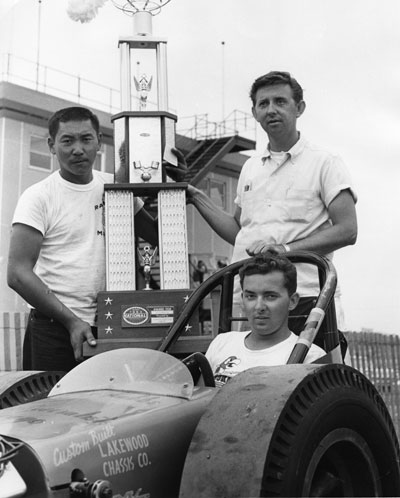 Vodnik officially burst onto the racing scene in 1963, a teenage phenom who beat the old master, Don Garlits, to win Top Eliminator at the 1963 Nationals in Indy but the kid from Illinois had been driving fast race cars for years, including, briefly, the nitro-burning Chizler of Chicagoland neighbor Chris Karamesines and Lyle Fisher’s Speed Sport dragster. A tragic highway accident that claimed the life of Karamesines ace tuner, Don Maynard and severely injured both Phil Hobbs and Kenny Hirata led to Vodnik driving the Hirata & Hobbs dragster at Indy.

The ‘63 Indy race is well remembered as the first official NHRA use of the new-fangled Christmas Tree starting system at a national event and Vodnik took the time to study the system. Vodnik won Sunday’s race for the right to face Garlits, who had driven Swamp Rat V to Saturday’s class championship. You can read more about how he won that big race, and about his career before and after the Big Go, in this column that I wrote about five years ago.

I interviewed Bobby a couple of times, both for that column and a later one, and found him to be delightfully engaging with a sharp memory and a keen sense of detail. He passed away last Sunday of a heart attack. He was 75. 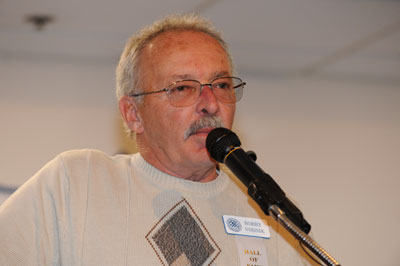 Len Cottrell, best known for decades as the owner and tuner of the Chicken Chokers alcohol cars, spent a lot of time in the past few years with Vodnik and his wife Sarah. They had known each other since the early 1960s. [Pictured right: Vodnik was inducted, along with Hirata and Hobbs, into the International Drag Racing Hall of Fame in 2013.]

“He raced all over the East Coast at places like Cecil County and Maple Grove, so we crossed paths a lot,” said Cottrell. “The last couple of years, whenever we raced the Chicago national event, we’d stay with him at Sarah at their home in Oak Forrest [Ill.]. Sarah was crazy to invite our whole crew, but they’d put us all up in beds and foldaways and she’d cook dinner for us every night. He’d pull out his old scrapbooks and we’d drink into the night looking at all of that.

“When we’d race on the East Coast, they’d come out and stay at the same hotel as us and have dinner every night, then hang out in our pits or visit with Kenny Hirata when [son] Dave was driving. He also stayed pretty close with ‘the Greek’; they’d go out parts hunting together in the pits to some of the big teams and buy their older parts to keep ‘the Greek’ out there. We were all in total shock that he passed; he was doing fine until then.” 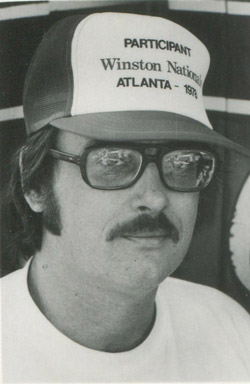 Veteran Funny Car racer Oglesby, was best known as the driver of a car sponsored by Mello Yello decades before the company’s current involvement with NHRA, died March 23 in his hometown of Ellijay Ga., after a long battle with lung cancer. He was 79.

Oglesby, whose roots in the class went back to the very beginning and his association with pioneers like Don Nicholson, Don Gay, and Arnie Beswick, flew the Mello Yello colors on his Mustang Funny Car for two seasons — 1979 and 1980 — at national events. Oglesby, who was a part of Nicholson’s Mercury teams in the 1960s, earned enough friends in Dearborn, Mich., to end up with his own Ford deal to field a Mustang Funny Car dubbed Quarterhorse and eventually landed the breakthrough Mello Yello deal.

In this 2016 column, Oglesby shared with me the incredible story of how he landed the Mello Yello sponsorship that all began with a chance meeting in a dentist’s office

Oglesby’s sponsorship closed out at the end of the 1980 season after he declined a new bottler-heavy contract proposed by a new brand manager. Oglesby repainted the Mustang and continued to compete with it through 1983.

Family friend Bill Craig, who alerted me to Oglesby’s passing on behalf of the family, said that Oglesby suffered from Stage 4 lung cancer that he had battled with some success.

“He was hanging in there; he called on one day last week and said he was having a rough day and would really love a cheeseburger, so I jumped in the car and got him one,” he recalled with a laugh. “That was the last time I got to sit with him in his office, where he had pictures of all of his hot rods.

“I didn’t know him during his racing time, but he told me a lot of funny stories from those days.

I spoke to Oglesby’s daughter, Tina, who along with siblings Kim, Michael, Kenny, and Brian, will continue to celebrate their father’s legacy; his passing comes less than a year after they lost their mother. They are planning a private family memorial, per his wishes,

As will we all, for both him and Vodnik, two more pioneers of our sport gone.