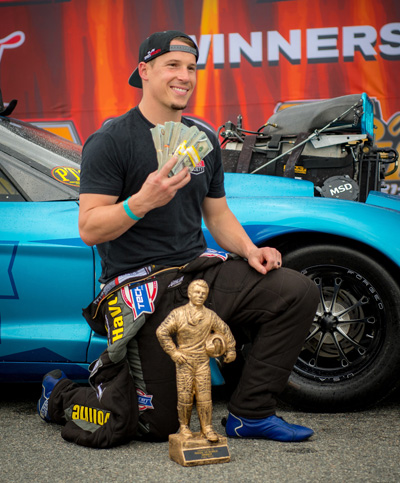 Some racers elected to take it easy during the off week between NHRA Mello Yello Series events in Pomona and Phoenix, but Pro Stock racer Alex Laughlin wasn’t one of them. Following his semifinal finish in Pro Stock at the season opener, where he barely lost to Jason Line, Laughlin ventured to NHRA Member Track South Georgia Motorsports Park for the popular Lights Out X small tire event and walked away with the $50,000 top prize.

Driving his Speed Society Corvette in the marquee Radial vs. The World class, Laughlin outlasted a massive field of the nation’s best small-tire racers. In the final round, Laughlin used a slight holeshot to get the best of opponent Daniel Pharris, 3.694 to 3.690 on the eighth-mile course.

“I left a Pro Stock race and came to Pro Stock race,” Laughlin joked. “It came down to that .004 to a .015 on the Tree. It’s just been an unbelievable weekend and the car was just running great the whole time. I have to give so much props to [crew chief] Frankie Taylor and [crewman] Jeremy Parsley for this. They kept the car running. These are the baddest dudes, period.”

Laughlin’s Corvette is powered by an aluminum Hemi engine topped with screw-type supercharger. Despite making in excess of 4,000 horsepower, the car is limited to a 10-inch wide drag radial rear tire.

Laughlin finished the Pomona event on Monday, and, after missing a flight, arrived in Adel, Ga., on Wednesday for the start of the Lights Out event. In a field of 75 entries, Laughlin was the fourth-quickest qualifier with a 3.652 at 207.11 mph and maintained a 3.6-second pace throughout eliminations. In the semifinals, Laughlin topped low qualifier Kevin Rivenbark’s ProCharger-equipped Camaro.

“This was my fourth radial tire event and every time we start the qualifying rounds, we play it safe and just try to make a moderate and clean pass to build from,” Laughlin said. “This time we decided not hold anything back and went for it right off the bat. In the first round of qualifying we threw down a 3.69 at 200 mph and became the first screw blower car in the 3.60s. We later ran 3.65 at 207 mph that placed No. 4 in qualifying, and also in the quickest and fastest field in radial tire history. 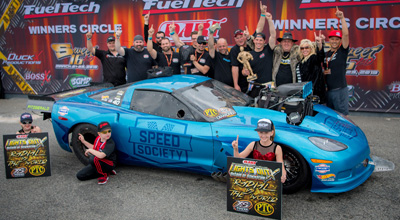 “What’s unique about my team is there’s only three of us; Frankie, Jeremy and myself. We don’t have the high-end factory support, the crazy computer systems, no wheelie or traction control. We have the bare-bones, antiquated mechanical fuel injection, some luck, and a lot of badass. Every single lap we made was a win light and we were up against the heaviest hitters of the class.”

The multi-talented Laughlin has already won two races this winter. In late December, he won a go-kart event on the high banks of Daytona Int’l Speedway. Laughlin is also preparing to enter the NHRA E3 Spark Plugs Pro Mod series and plans to make his debut at the 50th annual Amalie Motor Oil NHRA Gatornationals next month. Laughlin also plans to return to South Georgia Motorsports Park on March 22-24 for the Sweet 16 event .