Top Fuel winner Doug Kalitta: “Growing up and watching Connie [Kalitta, team owner and uncle] race, this place has always been very special for me, so to have success here is just more than I can imagine.

“My car started smoking the tires and I was sure he was going to blow by me and that we had given it away, but we hung in there and got the win light. There was no lifting. It was either going to blow or get the win. There was nothing to gain by [lifting]. Steve and that Capco group are bad ass, and we were real fortunate to get by them. He’s had a helluva streak and there’s no better place to get by him than the Winternationals.”

Funny Car winner Robert Hight: “It’s a long season. You look at the Funny car class and it looks tougher than last season, so to be the No. 1 qualifier and win the race is quite an accomplishment for this team. You could see today that everyone was running [3.]80s and stacking up. It’s not going to be easy. You’re going to have to be on your game on the starting line and consistent with your car. I’ve never seen Jimmy Prock more confident. We tested well and came right in here and didn’t miss a beat.

“With all that we’ve gone through this year with new people and new sponsors and cars, this really makes it all pay off. This is my fourth Winternationals here, and it’s one of the majors, as far as I’m concerned.”

Pro Stock winner Bo Butner: "It’s the same car the same team… we have some new guys but mixed in with a lot of the old guys, too. I had lane choice in the final round and a lot of people were questioning why I took the right lane, but I’m not really sure there was a preferred lane. But my car was a very good Top Sportsman car today, I felt like I could have dialed it in.

Top Fuel round 1: Showing no signs of being a rookie, Austin Prock left on his John Force Racing teammate, former world champ Brittany Force, then expertly pedaled his Montana Brand dragster after it shook the tires, then raced to his first round-win to highlight a wild first round of Top Fuel. NHRA legend Don Prudhomme, who helped get Prock's car funded, said, "I just saw a rookie drive like a veteran."

He will face Mike Salinas, as the San Jose, Calif. native defeated Clay Millican with a stout 3.68 to start off Monday's action. That will get him lane choice in the second round.  Reigning world champ Steve Torrence extended his unbeaten streak to 25 straight rounds with low e.t. of the round, a 3.688, to beat Steve Faria, and will have a semifinal bye for the 14-car field. Torrence’s father, Billy, also advanced with a tire-shaking victory over Cameron Ferre.

Top Fuel round 2: Doug Kalitta, one of the best drivers in Top Fuel history, showcased those skills with a huge holeshot victory over Billy Torrence. Kalitta’s .048 reaction time and 3.716 edged Torrence’s quicker-but-later 3.670 by .002-second at the stripe.

Mike Salinas advanced to the semifinals by .006 over rookie Austin Prock in a fabulous 3.68 to 3.69 battle while Steve Torrence extended his unbeaten streak to 26 rounds on a bye run. Terry McMillen reset both ends of his career best performances with a blast of 3.696 at 329.91 (previous: 3.710, 329.75) in beating Leah Pritchett, who kaboomed the blower at halftrack.

The victory for Torrence extended his unbeaten streak to 27 rounds as his holeshot-aided 3.688 edged out Salinas’ 3.687 while Kalitta won on a holeshot for the second straight time, edging Terry McMillen, 3708 to 3.706. Torrence, appearing in his seventh straight NHRA final round, will have lane choice over Kalitta, who reached the final round for the 97th time in his career.

The win, the 45th of Kalitta’s career, started with a .025-second holeshot, but his Mac Tools dragster began to lose traction partway through the run, allowing Torrence to close the gap by halftrack to just .002-second. Torrence may well have gone on to win, but his Capco Contractors dragster experienced mechanical breakage nearing the finish line, allowing Kalitta to hit the win stripe first.

Kalitta is only the second driver, behind Larry Dixon, to win the Winternationals in back-to-back years.

Funny Car round 1: Seven-time Winternationals champ John Force and new crew chief Brian Corradi blasted to low e.t. of the first round of Funny Car, roaring to a 3.890 in his Peak Camaro. It was Force’s 1,900 round of racing and boosted his win-loss record to 1,312-588 (69.0 percent). Force will have second-round lane choice against longtime rival Ron Capps, whose 3.933 was the third best pass of the round behind Shawn Langdon’s solid 3.930.

One of the round’s highlights was battle between brother Cruz and Frank Pedregon. Cruz, in his new Snap-on Charger, took the coasting 4.29 win after Frank shook the tires hard in the Worsham Family Toyota.

Funny Car round 2:  Robert Hight set low e.t. of the meet with 3.856 in beating Bob Tasca III and will take on teammate John Force in the semifinals.

Force joined Hight in the final by stopping Ron Capps in the 99th meeting of their respective careers. Force will have to cede lane choice to his Hight after a 3.900.

Beckman, who beat Cruz Pedregon handily with a 3.875, will take on teammate Tommy Johnson Jr., who was just a thousandth of a second slower with a 3.876 in beating Shawn Langdon.

Funny Car semifinals: Jack Beckman, who has two Winternationals victories to his credit -– both in Super Comp -– will get the chance to add a Pomona Funny Car Wally to his collection when he takes on Robert Hight in the final round.

Beckman, whose Super Comp wins came in 1998 and 2003, will be racing in his first final since last August in Brainerd, where he beat teammate Tommy Johnson, as he did in the finals here to advance to the money round.

Hight defeated his boss and teammate John Force with a 3.883 to reach his 72nd final and first since Dallas, where he will have lane choice over Beckman.

Funny Car final: Robert Hight earned his fourth win at Auto Club Raceway, defeating Jack Beckman by .007 second. He did it with a holeshot as he left on Beckman by .008. His Auto Club Funny Car was slower by .001, but he managed to get his 46th win anyway. Hight runnered up in Pomona to start the 2018 season, but the Southern California got the job done against a Don Schumacher Racing Funny Car to kick off the Lucas Oil NHRA Winternationals.

Beckman has nothing to hang his head about. He cut a .062 light and hung with Hight all the way to the eighth-mile, but then the John Force Racing Funny Car pulled away. Beckman last won in Brainerd, seven events ago. He will enter the next event (Phoenix) second in the points. That’s not a bad way to kick off the 2019 NHRA Mello Yello Drag Racing Series.

Pro Stock round 1:  Steve Graham earned his first round win when Deric Kramer posted a 6.907-second elapsed time in the opening Pro Stock round. Graham didn’t light the world on fire (6.607), but those three-tenths of a second made all the difference in the world and he’ll match up against Jason Line. Line owns lane choice with a 6.536.

That wasn’t good enough for best of the round. Bo Butner ran a 6.501 as the 2017 Pro Stock champion gets a shot at Chris McGaha in round two. That’s as close as we got to a 6.40, though it looked like Rodger Brogdon had a shot. The No. 1 qualifier left before the tree activated, giving Val Smeland a free pass to the second round. He’ll face off against Alex Laughlin, who defeated Jeg Coughlin Jr. The yellow and black car experienced problems as soon as he left the clutch out.

Pro Stock round 2: Erica Enders enters the semifinals with the Camaro to beat. She unleashed a .014 reaction time on Matt Hartford and posted the best elapsed time (6.51) to boot. She will race 2017 Pro Stock world champion Bo Butner, who slowed to a 6.526. That was good enough to beat Chris McGaha because the Texan hooked a left as soon as he dropped the clutch.

Alex Laughlin got away with the slowest lap of his weekend (6.716) because Val Smeland failed to get down the race track. That earns him a meeting with Jason Line, who has had his number over the years. The Texan hopes to change that and get him back into the finals. Line is looking for his first win since the Dallas contest during the 2018 Countdown to the championship.

Pro Stock semifinals: Bo Butner got away with a .041 reaction time to take down Erica Enders and advance to the final round of Pro Stock at the Lucas Oil NHRA Winternationals. He will battle teammate Jason Line and have lane choice thanks to his 6.518-second pass. Enders cut a .070, well below her high standards, and missed out on a final round.

Line and Alex Laughlin posted identical elapsed times, but the Summit Racing driver was much better on the tree. That got him into his first final since Dallas. No matter who wins, K.B. Racing will earn the first Pro Stock trophy of the year. Butner gets lane choice, though it doesn’t seem to matter who has it at this point. Line notched the best reaction time of the round (.018), and since the two share power … well, that might matter in the final.

Butner won this race to open the 2018 season and would love nothing more than to do it again in 2019.

Butner powered to the win, the 23rd of his career, with a 6.52 at 211.59, pulling away when the engine in Line’s Camaro expired at halftrack. Line was appearing in his 100th Pro Stock final.

Top Fuel Harley final round: In a final-round battle between last year’s top-two finishers, Doug Vancil defeated reigning world champ Tii Tharpe, 6.27 to 6.32. Tharpe got the slightly better reaction time but Vancil roared by to take the victory, his second straight at the Winternationals. 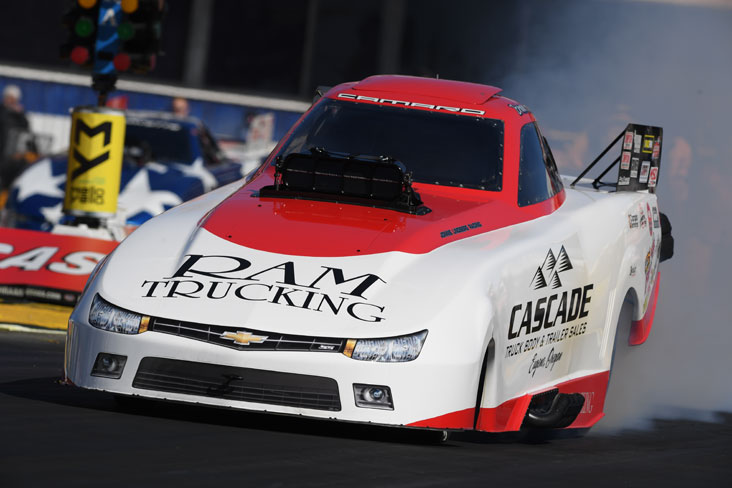