Scotty Pollacheck, a six-time national event finalist in the Pro Stock Motorcycle class, has announced that he will return to Matt Smith Racing for the 2019 season. Pollacheck will be riding an S&S-powered EBR as part of a three-rider team along with Smith, and his wife, Angie. Pollacheck, who last raced on a Smith-prepared bike in 2016, believes that joining the reigning champion represents his best shot to earn a long-awaited first national event victory. 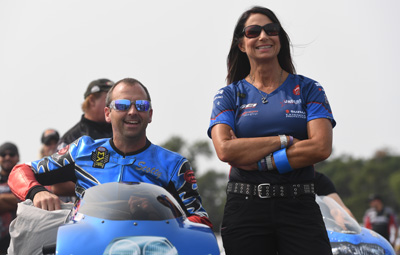 “I sure hope we’re going to win a race or two this year; there is not reason to think we won’t,” said Pollacheck. “Matt is awesome at what he does. He’s a great rider and a great tuner. As we saw last year, he’s making a lot of power and these new [EBR] bikes have a great aero package. I’m probably more excited than I’ve ever been to start a season.”

After a successful career in the Sportsman Motorcycle series, the Medford, Ore. based Pollacheck made his NHRA pro debut in 2010. He’s been a full-time rider since 2012 and has appeared in the Countdown to the Championship playoffs in seven of the last eight seasons. He previously rode with the Smith team from 2013-2016 and has spent the last two seasons racing a Suzuki with the Stoffer/Underdahl team. In 2017, Pollacheck appeared in eight semifinal rounds and finished the season as the No. 4 ranked rider in the class.

“At the end of last season, we knew that our association with Gary Stoffer and Greg Underdahl was coming to an end,” said Pollacheck. “We still have a great relationship with them; it’s just that they are making changes within their team.

“When we left Pomona at the end of last year, we weren’t sure if we’d be doing anything,” Pollacheck said. “My wife, Susan, and I really enjoy being out here and I still feel like I have a lot left to accomplish. I had a few conversations with Matt, and we were able to put a deal together. We raced together three years ago so I’m not expecting a big adjustment going back to a V-twin. In fact, I’m excited about it. We’ve seen some great [mph] numbers with the EBR body and I’m looking forward to seeing what I can do on one of them. I think that Susan might be even more excited than I am. She’s a huge part of this deal.”

“Going back to a team we know makes it so much easier for everyone, especially for Scotty,” added Susan Pollacheck. “It alleviates a lot of the typical growing pains because we don’t have to learn a new routine. Now, Scotty can just focus on being the best rider he can be.”

Smith won his third NHRA Mello Yello championship following a dramatic winner-take-all final round against Eddie Krawiec last November in Pomona. Since then, he’s signed a sponsorship agreement with Denso spark plugs, which addressed his most pressing concern about the 2019 season. When Pollacheck became available, Smith claims it was easy to make room for him on his team.

“We’ve always had the ability to run three or four bikes out of my trailer,” said Smith. “I recently bought two more EBR bodies; one for Angie’s bike and one for the bike that Scotty will be riding, so I had the resources to do it. I’ve got plenty of engines, too. 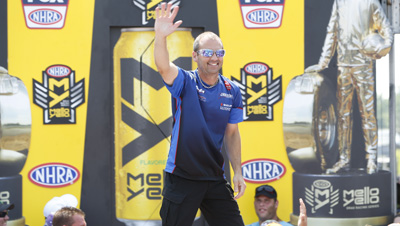 “When Scotty rode for us the last time, he went to five final rounds, but we just couldn’t close the deal. I really hope we can finish the job this time. My biggest goal for this year is for me, Angie, and Scotty to each win at least one race, and for us all to make it into the top ten. I really think we can do that.”

In a related announcement, Smith has added Michael Ray to his team as a crew member. As a rider, Ray has three wins in five final rounds and he’s also got extensive experience working on V-twin Pro Stock Motorcycles. Ray is expected to share the workload with James Wilkinson, who works on the Pro Stock Motorcycle and Pro Mod teams run by Smith and his father, Rickie.

Smith is currently recovering from a minor off-season surgical procedure but expects all three bikes to be ready for a test session in advance of the season opening 50th annual Amalie Motor Oil NHRA Gatornationals.

“I feel good,” he says. “We still have one more body to mount, and one bike to go to the paint shop, and we need to wrap the trailer. Right now, I’m focused on engines. We’ve been doing a lot of work on the dyno this winter. We’ll go to Florida and test the week before Gainesville but I’m confident that we’ll be just fine. As long as we have horsepower, we’ll be in good shape. You can always find the tune-up later.”