Andrew Hines and Bo Butner are in similar situations heading into the Mello Yello Countdown to the Championship, as both have been the points leader in their respective classes for the entire season. Now they just have to keep the mojo going for the next six events.
12 Sep 2019
Posted by NHRA.com staff
Feature

Andrew Hines and Bo Butner are in similar situations heading into the Mello Yello Countdown to the Championship, as both have been the points leader in their respective classes for the entire NHRA Mello Yello Drag Racing Series regular season. With that in mind, it’s simply a matter of maintaining the status quo at this weekend’s 35th annual Mopar Express Lane NHRA Nationals presented by Pennzoil at Maple Grove Raceway. 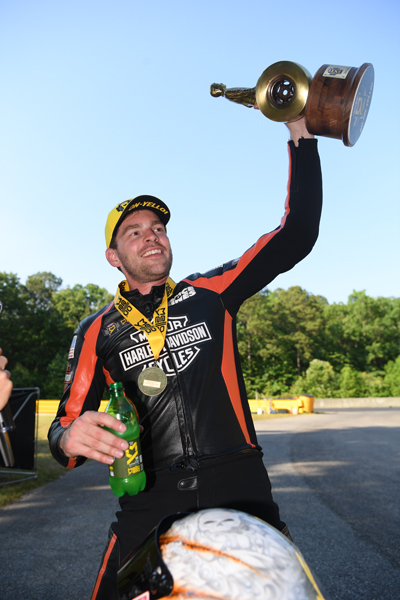 Hines has been dominant in Pro Stock Motorcycle, winning seven of the 10 regular-season races in the class, while Butner has been the points leader in Pro Stock since the opener, racking up four wins thus far in 2019. Now both will look to keep that going through all six playoff races, where championships will be on the line. Hines, the winningest rider in the class, is after his sixth world title, but he won’t change his approach on his Screamin’ Eagle Vance & Hines Harley-Davidson FXDR, even as the stakes are raised starting in Reading.

“It’s business as usual,” Hines said. “It’s been such a good year and we just want to continue on, refine what we’ve learned and keep moving forward. I feel like you have to constantly improve in this class. You can’t be idle. (Defending world champ) Matt (Smith) is coming on strong and we saw Jerry (Savoie) come on strong in Indy. But right now, we’re focused on our three Harleys and getting them where we want. I’m excited for these last six races and what we can do.”

Steve Torrence (Top Fuel), J.R. Todd (Funny Car), Vincent Nobile (Pro Stock) and Hector Arana Jr. (Pro Stock Motorcycle) were last year’s winners of the event that will be televised on FOX Sports 1 (FS1), including final eliminations on Sunday, Sept. 15 at 2 p.m. (ET). Both Torrence and Todd used that momentum last year to win their first world titles, a scenario Hines and Butner would like to repeat in the two Pro Stock classes.

Butner was dominant right out of the gates in his Jim Butner Chevrolet Camaro, winning four the first five Pro Stock races. While he’s maintained the points lead for all 12 events in the regular season, Butner is looking to re-create that early magic. He won at Maple Grove Raceway in 2017 en route to his first Pro Stock world championship and has raced well in previous weeks, leading Butner to believe that he can get on another hot streak at the perfect time.

The 11-time event winner will have to deal with the likes of KB Racing teammates Jason Line and Greg Anderson, as well as Indy winner Alex Laughlin, Jeg Coughlin Jr., Erica Enders, Matt Hartford, Deric Kramer, Chris McGaha and Val Smeland, but he likes his team’s state of mind.

"We have a good car right now,” Butner said. “My Jim Butner Auto Group Chevy Camaro is starting to show some signs of greatness again, and this is the right time for that. We enter the Countdown as the No. 1 seed, and hopefully, that's where we end up. Of course, you want to win, especially once you know what it feels like – but if it's a KB Racing car at the end, we'll be happy. We've been saying all year that we want to be 1-2-3 at the end, and we're starting this deal off pretty close to that. Now we just have to keep it going and keep everybody else from separating us."

Hines, who has 55 career wins, has eight final-round appearances in 2019, putting him on an ideal path heading into the playoffs. But the work isn’t done, especially as the talented rider will try to ward off challenges from teammates Eddie Krawiec and Angelle Sampey, M. Smith, Indy winner Savoie, defending event winner Arana Jr., Ryan Oehler, Karen Stoffer, Angie Smith and Hector Arana Sr. Hines, though, isn’t thinking too far ahead, an approach that’s served him well this year.

“I’m just trying to be focused on the next run,” Hines said. “You can’t control 3-4 runs from now, you just have to stay focused on the next run. That’s where I’ve struggled in the past, but it’s worked out well. I’m just looking to win the next round. I’ve taken that aspect from Eddie, and it’s taken a lot of pressure off. It’s helped make me more consistent, so we’ll look to keep that going.”

To purchase general-admission or reserved seats, call 610-856-9200. Tickets also are available online at www.maplegroveraceway.com. Kids 12 and under are free in general admission areas with a paid adult. To honor the Salute to First Responders, military and first responders can save 20 percent on general admission tickets at the gate.