Paul Lee and Jim Oberhofer. On the surface you might think they’re a bit of an odd couple, the comebacking Funny Car driver and the talented Top Fuel tuner, brought together under the new Straightline Strategy racing group, needs and positions being filled, but the duo – both originally New Jersey boys – have a lot in common beyond their roots.

Lee is back to racing with a new lease on life after a near fatal heart attack in December 2016 and one might say that Oberhfoer is also looking for meaning and life after his long tenure with Kalitta Motorsports ended in late 2018, and together they’re creating an interesting story in the Funny Car pits.

Eleven Funny Cars ran in the three-second zone during Friday’s two qualifying passes at the Summit Racing Equipment NHRA Nationals and driver Paul Lee and tuner Jim Oberhofer and their McLeod Dodge Charger were among that fast group, emblematic of their quick rise to prominence in just their third race together.

“We’re getting there,” allowed Oberhofer. “All of the other teams can see that by looking at the [run data] sheets. We’re getting a baseline, and gathering data. We’ve got less than a dozen runs together but we’ve run in the threes a couple of times already and I’m still learning.

The team’s fast rise no doubt owes its progress to their alliance with Don Schumacher, who got them not only the two cars, bodies, and trailer they needed, but gave them shop space in his Brownsburg, Ind., complex and access to world champion tuner Rahn Tobler, whose complete combination they run. 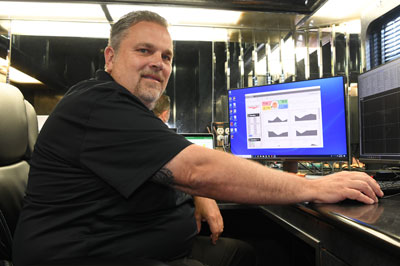 “Tobs is like my big brother,” said Obehfoer, whose relationship with Tobler goes back to when Tobler was working with Kalitta before joining DSR. “When we first did this deal with Schumacher, Don asked me [insert pretty decent Don Schumacher impersonation], ‘OK, Jim O., which of my crew chiefs do you want?’ I thought, ‘Well, that’s not really a fair question because you’ve got nothing but good guys, but if I want to work with one, it’s Tobler.’

“When you have a guy like Rahn Tobler who wants to help you, you should listen. I don’t care who you are. Everyone in this sport has an ego –- some big, some small -– but you have to put that to the side to do what’s right. All I want to do with Paul is run good and win.”

It’s also a symbiotic relationship for Tobler, who can give to Lee and Oberhofer some ideas he’d like to explore without having to do them on his Ron Capps-driven NAPA Dodge.

“I’m getting an idea of what we’re supposed to do, but Tobs has enough respect for me to let me try things,” said Oberhofer. “In Chicago I didn’t feel like we were making the power I thought we needed, so I told him I wanted to speed up the blower, even though it didn’t fit his model. He said, ‘Alright,’ and it went out and ran 3.92. It’s been fun working with him and I think beneficial to both teams. When we tested in Charlotte before we went to Atlanta, we tried some stuff on our car that worked, so Tobs put it on his car and went out and won the race. I’m not saying that we helped them win the race by any means, but it’s cool that we can work together like that.”

Although Oberhofer earned his reputation in Top Fuel, tuning Doug Kalitta to the vast majority of his wins, Funny Cars are not unknown to him. He had a hand in the Kalitta Funny Cars back to when Scott Kalitta was driving, and, of course, his brother, Jon, and Todd Smith tuned J.R. Todd to the championship last season. The brothers don’t compare notes because their tune-up and parts are so different, but at least Jim O. can now wear the “Dragsters Suck” that that his brother had made up as a joke.

Because Lee is running a limited schedule in his comeback season -– they’ll be off until Brainerd after this event, then run Indy and four of the six Countdown races -– Oberhofer will lend his talented hands on Clay Millican’s Straightline Strategy-affiliated Top Fueler, assisting crew chief Mike Kloeber and also tending to a new business venture. He recently bought three franchise licenses for Victory Lane Quick Oil Change, a Michigan-based company that was looking to expand into Texas, where Oberhofer lived for years after his family moved from New Jersey and where his parents still live. He plans to open his first store in Plano, just a couple of miles from his parents’ house, in August.

Lee is doing his part, too, quickly getting reacquainted with driving while maintaining a workout regimen that keeps his heart –- and it’s all important ejection fraction, which measures the efficiency of the heart -– healthy and getting regular checkups with his cardiologist. The defibrillator that was inserted after the operation has long since been removed and Lee no longer needs to wear the protective Kevlar vest. He's comfortable in the car and ready for all that Jim O. can throw at him.