Ray Martin has NHRA licenses in 12 classes, but the latest ticket to ride for the Alaska-based driver is for a nitro Funny Car. He qualified the Worsham family’s Toyota for a shot at winning the Chevrolet Performance U.S. Nationals.
01 Sep 2019
Phil Burgess, NHRA National Dragster Editor
Feature

Going fast is nothing new to Ray Martin. He has NHRA licenses in 12 classes, including Pro Mod, Top Alcohol Dragster, Comp, Super Stock, Super Comp, Nostalgia Funny Car and a few others in addition to his usual ride in Top Alcohol Funny Car, but the latest ticket to ride is for a nitro Funny Car, and he’s saddled up this weekend in the Worsham family’s Toyota for a chance at winning the Chevrolet Performance U.S. Nationals.

Martin made his debut in the Del- and Check-Worsham tuned screamer at last year’s Auto Club NHRA Finals and qualified with a 4.18. He never got a chance to race in the first round, however, as an electrical problem wouldn’t allow the engine to fire.

Martin lost his first run at this event when the car collected the top-end timers on a 4.11 run – “that was 100% the driver’s fault,” he admitted – then came back Saturday night to rocket to his first three-second pass, a 3.962 that ultimately landed him in the No. 13 spot. 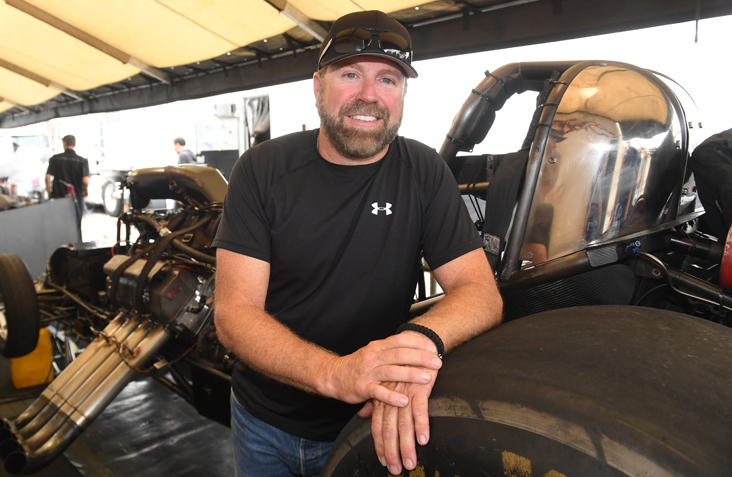 “The Alcohol Funny Car does all kinds of stupid stuff, but it does it early,” he explained of the difference between the two flavors of floppers. “By the time you get past halftrack that’s all behind you. In the nitro car, the ride is just beginning. They leave about the same and for the first 200 feet of the run in the nitro car you’re going, ‘Ah, I’ve got this; it’s no big deal,’ then the clutch starts coming in and it’s like you get shot off on a laser beam. It vibrates and it’s hard to see. It’s a helluva ride.”

Martin faces a challenge few of his peers do. He lives in Anchorage, Alaska, where he runs a construction business. Although his race cars are based in Phoenix, it’s still a long plane ride to get to the races no matter where they are.

Alaska does have racetracks – including Alaska Raceway Park, whose logo flies on the car’s spillplate – but other than 1970s campaigner Jim Moore, it’s not exactly known for Funny Car drivers. It also was in his homestate that he saw his first Alcohol Funny Car runs.

“I walked over this hill at the track and saw this Alcohol Funny Car – the Glacier Shaker of the Harris brothers – doing a burnout. I was like, ‘What in the hell is that?’ and I sat down and never got up. That was probably 1983-’84. I’ve been in love ever since.

“I love every class, and [nitro Funny Car] is just part of the evolution. I’m glad to be in a sport where there are evolution markers that you can keep going with. It’s an honor to race with the Worshams; they’re legends. There’s no one else I’d rather do this with. I feel so comfortable and safe in this car.”

UPDATED AFTER FIRST ROUND: Martin defeated Ron Capps for his first career round win in the class.