Harold Satterlee is honoring his uncle, "Famous Amos" Satterlee, by creating models of his uncle's famous cars, often melding together multiple kits to get the parts right and to to preserve his uncle's legacy. Also, some loving memories from one of Amos' grandchilden.
19 Apr 2019
Phil Burgess, NHRA National Dragster Editor
DRAGSTER Insider

My late stepfather used to say funny things like, “As an electrician, he makes one helluva plumber” which was a nice way of saying that someone might be out of their element. To that end, as a model builder, I was one helluva dishwasher (or something like that). 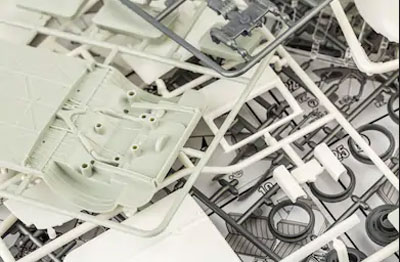 Like most kids growing up in the late 1960s and early 1970s, I built models, mostly (surprise!) drag racing cars. Now, I’ve seen professionally-built models of the kind I used to attempt and to call mine sloppily built is an insult to sloppily-built models everywhere. I had more glue stuck between my fingertips than the model parts (when it hadn’t dropped onto my jeans to form stiff little circles or left spiderwebbed on the model), the decals were eyeball-straight (which is to say not at all), and the paint –- if I painted the car at all –- had more runs than an old pair of stockings. And don't even get me started on Xacto knives; I've got scars  -- mental and physical. (All of this is a pretty sad admission from a kid whose natural father was a skilled tool and die maker who worked at Revell in the late 1960s.)

In previous columns, I have shared the intricate skills of master modeler Mark Gredzinski, who creates period-correct drag cars and engines practically from scratch; today, as a follow-up to last week’s column on “Famous Amos” Satterlee, I share a byproduct of that column. 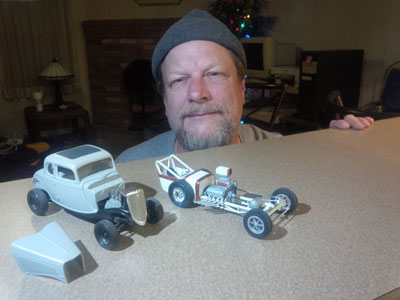 Satterlee’s nephew, Harold, who shared so much good info with me that helped to make that column a special salute to “Famous,” is an avid modeler, too, and has gone to great lengths to try to recreate in plastic some of his famous uncle’s hot rods.

“I had joined a local chapter of the International Plastic Modelers Society and entered in contests, and it discouraged me from doing modeling for almost a decade,” he admitted. “Everything had to be perfect beyond my abilities, and nothing I could do was able to earn a ribbon. I gave up the hobby for years. When I finally I missed the joy of doing enough to give up the need for perfection I started up again.”

Because most of his uncle’s machines were not immortalized in plastic, Satterlee has become very resourceful, often combining multiple generic kits to craft his tributes.

“Parts swapping is the extent of my abilities,” he admitted. “Exact accuracy will be surrendered to use available parts, but that‎ will not dampen my joy of modelling and having something to resemble and honor the history of my uncle.”

“I used parts from three kits to build this one, including from the pickup kit, three carburetors, intake, and Offenhauser‎ heads for the 296-cid Flathead. The car was owned in partnership with Frank Amos, and raced around 1958 at Lions, San Gabriel, and Colton.

“The 34 Ford Coupe kit was a five-window but was the only kit I could find of a ‘34 coupe. Uncle Amos' car was a three-window. And close but not the exact steel wheels and tires.” 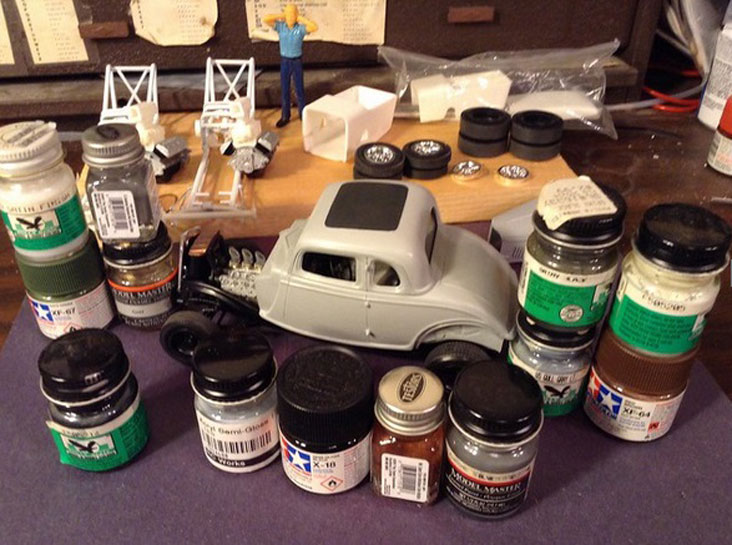 "A picture of the Coupe and the paints used for it.  I could not find a spray paint in the right color of gray, but found a bottle of gray that hand brushed on well. I don't get along with airbrushes very well so I use spray cans or brushing. In the back are the frames and bodies for the Hustler II. 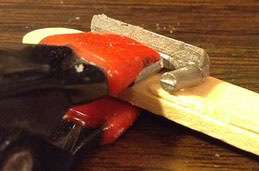 "The headers for the coupe came from the Double Dragster kit. I bought four of those kits because they were rich in spare parts to borrow for other projects. The headers had to be modified by adding extra plastic to where they attach to the heads, and changed the angle of the front tube by cutting half way into it, bending it and gluing, held in place by the clamp and the toothpick under the tube while the glue dried."

"The kit for the '34 Ford Coupe built the stock version, but Uncle Amos car was without the fenders. I left off the fenders, cut off the back section of the frame. and added a piece of flat plastic to the rear of the body under the trunk lid." 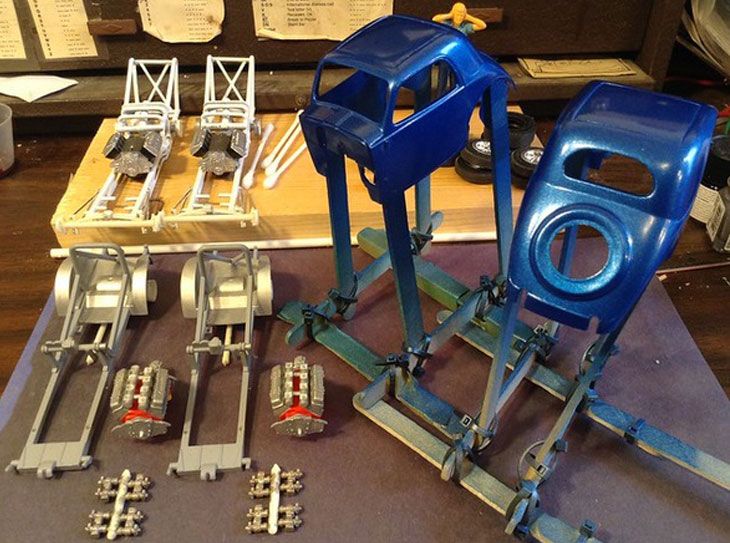 "The coupe had to settle for one of the Buicks from the Double Dragster kit, and I used the optional eight-carburetor intake because it put more detail in the engine compartment than the injection.  And the Metal Flake Blue paint on the Fiat Coupes was a practice run for when I build the Mickey Thompson's Mach 1." 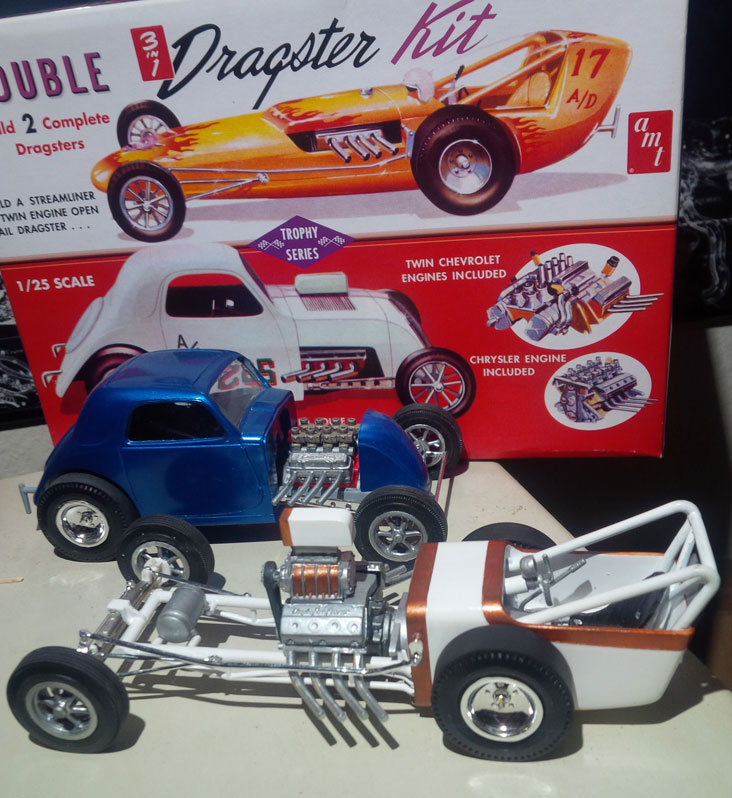 “This is one I built after the Hustler II which he worked on. The chassis is not an exact match, but the "Double Dragster" kit is the only kit I have found for a rail dragster of‎ that era. The kit builds two cars; the rail was actually Tommy Ivo's twin Buick-engined car I took the blown Chrysler from the coupe and adapted it into the rail and painted in the Chrisman livery of gloss white and metal flake bronze.” 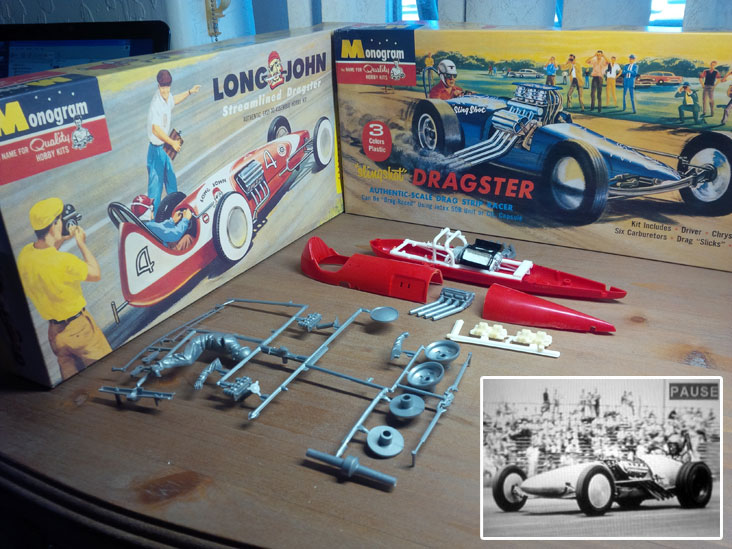 “This is a work in progress. I think he bought this car from the Chrismans‎. They called it ‘the Purple Car’ (inset) but the body was bare metal. The chassis, Chrysler motor, and Hillborn injectors come from the Double Dragster kit that the Hustler II came from‎. The Slingshot Dragster kit is supplying the tires, wheels, and Moon hubcaps. I will be doing good to cut a portion out of the rear of the Long John body and patch it back together to get the driver in between the rear tires instead of way behind them."

“I built two of each the coupe and Hustler II and sent one of each to Uncle Amos and kept one for me. I also built two of the Fiat Coupe Altereds, one of which I sent to my brother Ralph.  When I was a kid, Ralph introduced me to modeling and painted the bodies of my early models. Parts permitting, I will build two of each future project to send one to a family member that would like something from my hands and a memento of Amos' legacy.”

Yep, as a modeler, it's safe to say that Harold Satterlee is one helluva modeler. As a nephew, there's probably none better.

I was thrilled to hear from another member of Amos Satterlee's family, granddaughter Jessica, daughter of Rita, who shared me with these touching memories of her grandpa and the photos at right.

"Thank you for that amazing article that you wrote on 'Famous Amos.' I never made it to the races," she wrote. "As a little girl, I would beg to go. My Nana would say, 'No mija, it’s too loud and you would get bored.' So sadly, the closest I ever got to the races was going with my Nana to bring occasional lunch or dinner to the shop.

"Wearing one of his oversized racing T-shirts (to me it was a nightgown) to bed was soothing when I would spend the night. I also felt pride to have his name on a brightly colored T-shirt. Every time, I was at the house and he would come home from the shop my Nana would announce 'Dada's home!' Filled with excitement I would run over to the door and give him a great big motor oil hug.

"One day, myself being newly married thought I was so big and grown up. He was pouring himself a Jack and 7. I said, 'Hey what about me?' He slyly walked over to the cabinet, took down a glass, and made me a drink, snickering while handing it me. My first Jack and 7! It knocked me out! He giggled and let me forget it. To the world he was 'Famous Amos'; to me, he was Grandpa and I was his Mutt. I love and miss him with all my heart."

I told her that while she had never seen him at the races as I did, she knew him personally and knew his love, so she was much richer than me. I think a lot of people felt that way about him.