On Friday at the Strip at Las Vegas Motor Speedway, Mike Finnegan sprinted out to a 1-0 lead over rival Jarrad Scott in the much anticipated “Gass-o-Ween” match race being held during this weekend’s Dodge NHRA Nationals presented by Pennzoil.
02 Nov 2019
Kevin McKenna, NHRA National Dragster Senior Editor
Race coverage

On Friday at the Strip at Las Vegas Motor Speedway, Mike Finnegan sprinted out to a 1-0 lead over rival Jarrad Scott in the much anticipated “Gass-o-Ween” match race being held during this weekend’s Dodge NHRA Nationals presented by Pennzoil. Finnegan, the star of the popular Roadkill series, wheeled his Blasphemi ’55 Chevy to the first win in the best-of-three match with an 8.632 that was more than enough to cover Scott, who drove his Bitchin’ ’62 Ranchero to an 8.758. Not surprisingly, Finnegan was thrilled with the result, not just because he was able to gain and early advantage over Scott. 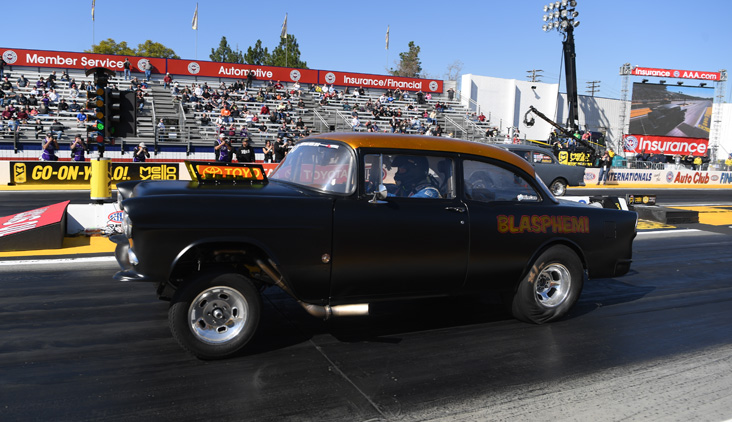 “That’s the second-quickest pass I’ve made with this car so I’m pretty ecstatic right now,” said Finnegan. “I ran 8.52 during Drag Week but that was in Richmond [Virginia Motorsports Park] and that’s a sea-level track and the air was pretty good. I’m happy, but we can do better. I cam out here thinking we could run 8.4s and I still think that’s possible. Yesterday, I think that was a pretty darned good drag race. Jarred made it close and I think it was a great show for the fans. We’re probably going to need to step it up [Saturday].”

Although he didn’t get the win, Scott has made steady progress in his first appearance at an NHRA national event. During Friday morning’s time trial pass, he spun the tires. Scott went to work with the help of Drag Week regulars Alex Taylor and her father, Dennis, to make necessary adjustments and was rewarded with one of the quickest runs he’s made with his Hemi-powered Ranchero. 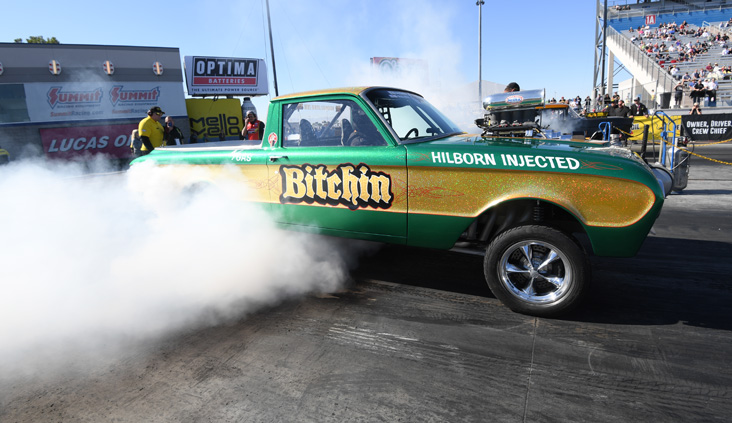 “My car spun the tires again on the second run but not nearly as bad as it did on the time trial run,” said Scott. “We made some adjustments and took some power out on the starting line. We ran right after the nitro cars, and that’s obviously something I’ve never done before so we had to adjust. When it spun, I gave it a quick pedal and we ended up giving Mike a pretty good race. He could hear me; he definitely knew I was coming. We just ran out of race track. I’ve got a smaller [blower] pulley with me so we can throw more power at it if we have to. I don’t plan on losing again.”

Round two of the titanic Gasser clash will take place Saturday prior to the event’s third Mello Yello qualifying session and round three, if needed, will take place before the fourth session.