Matt Hagan: "You have to focus on what you can control" in Funny Car title battle

Riding a two-race win streak and after having the only Funny Car to make it down Auto Club Raceway at Pomona on both qualifying passes Friday, Matt Hagan is feeling pretty good -– and relaxed -- about his bid for a third Funny Car championship.
16 Nov 2019
Phil Burgess, NHRA National Dragster Editor
Feature

Riding a two-race win streak and after having the only Funny Car to make it down Auto Club Raceway at Pomona on both qualifying passes Friday, Matt Hagan is feeling pretty good -– and relaxed -- about his bid for a third Funny Car championship.

After back to back wins in Dallas and Las Vegas, he and crew chief Dickie Venables have climbed from the No. 6 seed entering the Countdown to the Championship to third, now just 48 points behind leader Robert Hight.

“I don’t feel any pressure; I’m just having fun,” he said. “The car is so good right now. I’ve been in Robert’s seat and looking back while trying to move forward and if the roles were reversed, my butt would be a little puckered.”

The Dodge Charger Hellcat Widebody Funny Car has been on an incredible roll, and not just on Sundays. It’s run in the three-second zone on 22 of its last 25 runs and turned on the win light the eight times it’s gone down the track on Sundays. In winning in Dallas, they made four runs Sunday between 3,903 and 3,909.

Don’t mistake Hagan’s ease for dismissal. He’s been on both sides of the coin. His championships, in 2011 and 2014, came, respectively, from the fifth and seventh seed, so he’s been there and done that. He’s also entered the Countdown as the top seed, in 2013, only to lose the title to John Force in Pomona, just as he painfully did in 2010.

“It’s great to toot your horn but at the end of the day I know how humbling these cars can be,” he said. “We just have to keep working on our combo. I believe in my guys and it’s just cool to see that hunger, that feeling that they know they have the opportunity, 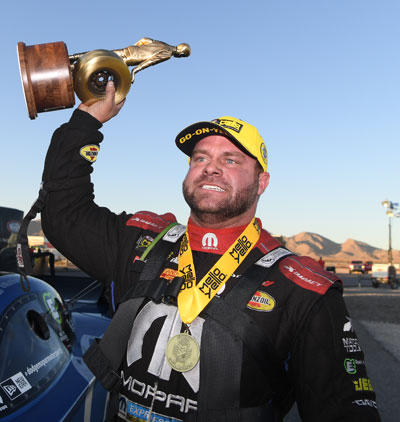 “I think that Robert has to focus on Robert and we have to focus on us.  That’s the biggest thing I’ve learned over the last 10 years of working for Don Schumacher is that you’ve got to stay in your lane. You have to focus on what you can control and leave the rest up to what it is and let it take care of itself.

“Not everyone does that and not everyone is good at that, but that’s the only way I’ve been able to do it.”

And Venables is doing his thing, as he always seems to do. His car ran 3.900 and 3.872 Friday when no one else could put together two good runs.

“The track was a lot better than what people thought and they were shaking the tires,” said Hagan. “We were actually placing the car towards the outside [of the lane] to try to find some different rubber. My guys have done a really good job on the wear package for our clutch and our combo and getting it down the track. The car is just so good now and my lights are good, so we’re just digging.”