Just a quick little update today to keep the wheels rolling. As I noted a few weeks ago, with the new race weekend scheme on NHRA.com where we post a ton more stories than in the past, I’d rather not have the Insider columns buried by the race coverage and lost to space so I’ve dialed that back when feasible and didn’t want this week to sweep by without a few notes. 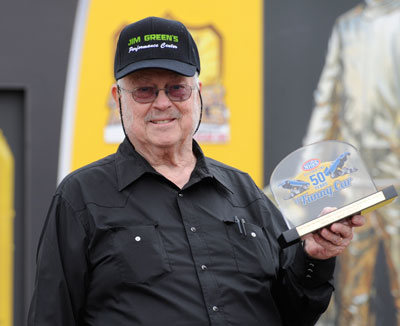 First, like many of you, I was saddened to hear of the passing of longtime Funny Car owner Jim Green, who fielded the popular Green Elephant floppers of the 1970s. Frank Hall won him a world championship in 1973 by winning the World Finals in Amarillo (back when winning that event made you the champion) but he had a lot of great drivers including Rob Bruins, Mike Miller, and Richard Rodgers. I interview Jim and his wife, Betty, a decade ago for this wonderful column about this history.

I got a chance to meet Jim a few years ago in Seattle, during NHRA’s 50 Years of Funny Car celebration, where he was recognized for his efforts. I know that meant a tremendous amount to him for NHRA to single him out from all of the other great Funny Cars of the Northwest.

Based on my Twitter feed after I announced his passing, he was a great favorite among many people. He’ll be missed. 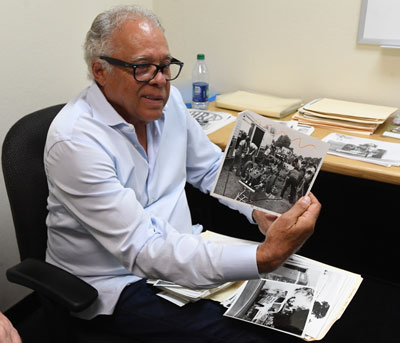 Don “the Snake” Prudhomme was in the house Wednesday looking through our amazing (and voluminous) collection of photos from his career to illustrate a book that Elena Scherr is authoring on his life and times.

A few years ago, our own Marc Gewertz went through the thousands and thousands of “Snake” photos and sorted them by decade and by car, which made their task a little easier, but there are tons of them. We spent probably five-six hours going through them and only got through the 1970s, so he’ll be back.

It was great fun watching him flip through the images and going, “Ah,  geez, I remember this” and telling us the story behind the moment or some detail about the car. (For you Snake III Funny Car fans out there, rest assured that he still thinks it’s one of his coolest cars, too.)

He took a break in the middle of the photo browsing to join Lewis Bloom in the NHRA studio for this piece below, in which he talks about the book and other cool stuff. 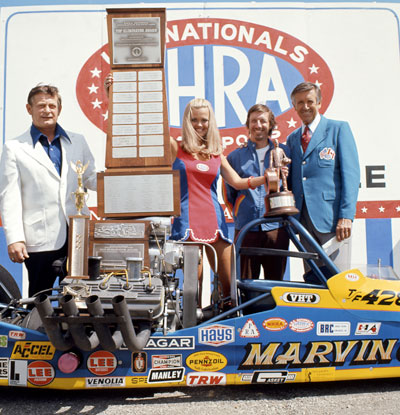 So what’s next for the Insider? Next week, as part of what will be a series of columns leading up to this year’s 65th annual Chevrolet Performance U.S. Nationals, I’ve got a column on Marvin Graham with the behind-the-scenes story of his win at the 1974 event that led to his “Marvin Who?” nickname.

If you’ve been around this column since the beginning almost 12 years ago, you’ll maybe remember that Graham was on of the column’s first feature subjects whose out-of-the-blue phone call to me to report the passing of his longtime crew chief, Chester Garris, changed the focus of this column when it badly needed one. I originally started the column as a way to promote upcoming issues of National Dragster – let you know what we were working on and share what goes on behind the curtain – but it even bored me a little. As soon as I wrote the Graham piece, the floodgates opened with praise and requests for more similar pieces. That piece, located here, still has one of my favorite lead paragraphs. So, thanks Marvin.

The piece not only will cover the twists and turns of that 1974 Indy race but his career before and after. It’s been a fun piece to work on. I haven’t decided yet whether to publish it next Friday (Norwalk race weekend) or to wait to the next Friday, which will be the first Friday in four weeks without a race.

Anyway, that’s the scoop. Thanks, as always, for the support and emails and patience.