NHRA Top Sportsman racer Larry Larson made his first run in his Chevy S-10 pickup in his quest to put it in the record books as the quickest street car on earth at the 2019 Menards NHRA Heartland Nationals presented by Minties. We have the video right here.
07 Jun 2019
David Kennedy
News

NHRA Top Sportsman racer Larry Larson is looking to put his Chevy S-10 pickup in the record books as the quickest street car on earth during exhibition runs Friday at the 2019 Menards NHRA Heartland Nationals presented by Minties. Larson is scheduled to run his S-10 three times today (at 2:30, 4:30 and 7:45 p.m. CDT) to see if he can reclaim record.

Here's the video of his planned shutoff pass, a 6.168-second hit at 181.57 mph. He will return to make a second and third shot later in the evening. You can see the action live on NHRA.tv and check back later for more highlights.

Where does a guy with a turbocharged big-block pickup get off thinking he can do that? Well, he’s done it before.

In 2014 Larson set out to build this 1998 Chevy S-10 pickup into a 5-second Top Sportsman truck capable of 1,000-mile road trips to compete in Hot Rod Magazine’s annual Drag Week. The Drag Week event was created by then Hot Rod Magazine Editor-in-Chief David Freiburger to allow racers to enter any vehicles they wanted, as long as those vehicles could make passes at five drag strips in five days. The catch was competitors would also have to drive those vehicles on the street from track to track. In some cases that meant more than 300-mile overnight runs. 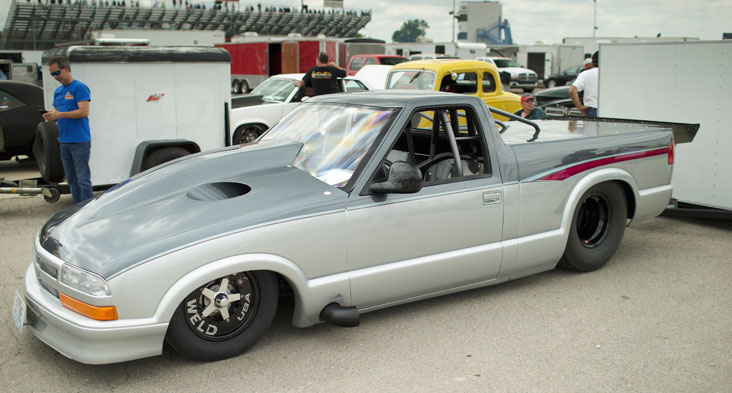 To accomplish that mission, Larson took nine months to transform this S-10 from a $400 Craigslist score into a Top Sportsman race truck with a 25.2 SFI chassis and a trailer hitch to pull a support trailer.

The truck debuted at the 2014 Hot Rod Magazine Drag Week event where Larson and Chad Reynolds drove the truck five days in a row, and made passes in the 6s at four drag strips, including Heartland Motorsports Park in Topeka. While the truck made it through the road trip part of Drag Week, the goal of running in the 5s eluded Larson until he ran it again later that year in Las Vegas when it went 5.95 seconds at the 2015 Street Car Super Nationals.

In 2015 Larson returned to Heartland Motorsports Park in Topeka to be the first and only street legal car to qualify number one in Top Sportsman and he went on to win the event. During his victory at the 2015 Topeka event, Larson ran as quick as 6.16 at more than 244 mph making him the quickest and fastest winner in the history of Top Sportsman presented by RacingRVs.com. 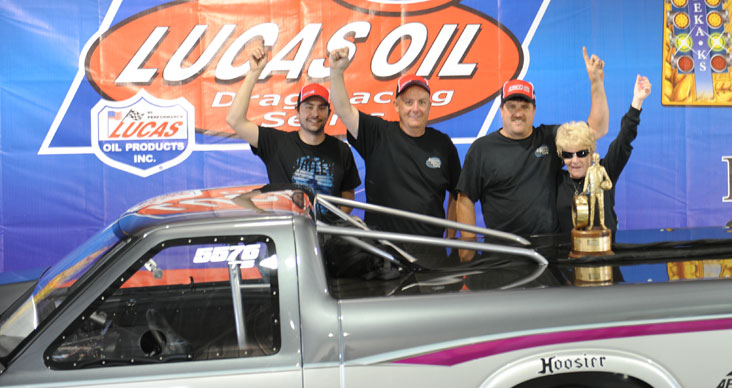