When it comes to Pro Stock racing, Delco personifies the old adage, “Been there, done that.” He doesn’t need to reminisce about the so-called “good old days” of Pro Stock, because he lived through a large chunk of it and is still going.
01 Apr 2019
Kevin McKenna, NHRA National Dragster Senior Editor
Feature

When it comes to Pro Stock racing, Delco personifies the old adage, “Been there, done that.” He doesn’t need to reminisce about the so-called “good old days” of Pro Stock, because he lived through a large chunk of it. Like many Pro Stock drivers, Delco’s path to the Pros was paved by early success in bracket racing, Super Gas, and Comp eliminator.

He made his Professional debut at the inaugural Keystone Nationals in Reading in 1985, driving for one of the most colorful personalities of the era, Flip Bonito, owner of Flip’s Speed Shop in Yonkers, N.Y. He also enjoyed the support of another Northeast Division icon, Comp racer Sal DiPaolo. Delco paid his dues with DNQs in six of his first nine attempts, but by 1987, he’d become a consistent qualifier in a Pro Stock class that was loaded with talent, and money. As a driver, Delco could be counted on to bank a few round-wins thanks largely to a quick clutch foot. During that era, Pro Stock cars ran in the 7.20s at just over 190 mph, but as Delco recalls, that doesn’t mean they were easy to drive. 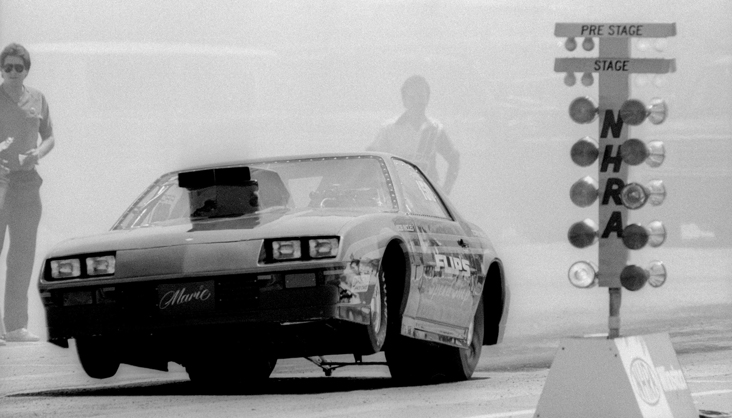 “They felt fast even back then,” said Delco. “Remember, we didn’t have bead-lock wheels or fancy shocks or anything like that in those days. When you drove over a bump, you felt everything. When I started in Pro Stock, we didn’t even have a five-speed; we were all using Lenco [four-speed transmissions]. I even tried the air shifter one time [when rules permitted them], and it locked up on me, so I took it out and went back to a manual shifter after one race.

“The big thing was we didn’t have the power that the fast guys like Glidden and Reher-Morrison and WJ had,” said Delco. “We ran fast because we worked on the clutch and the chassis. Not too many people did that back then. David Reher once told me that if they ran slow, they’d just go home and find more power. They could do that back then, but we couldn’t. We always had good early numbers because of our setup, so we could run with those guys as long as the air was decent.”

Delco went on to drive for Connecticut’s Paul Rebeschi and made it to his first final in Memphis, Tenn., in 1988. In 1990, he enjoyed his greatest day at the races when he drove Rebeschi’s Pontiac to a breakthrough win at the Gatornationals. 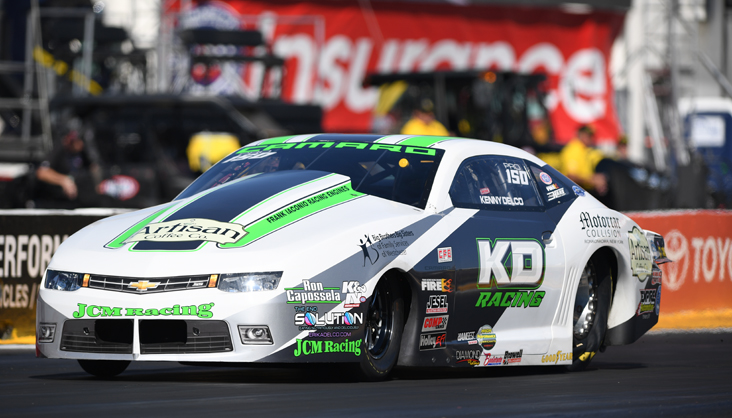 “I should have two wins,” Delco laughed. “In Memphis, I broke a crankshaft in the final against Tony Christian. I had him covered. I was faster than him all day. I changed engines halfway through the race and was still faster than he was. We were both running Bob Ingles’ power, and I also had a Paul Rebeschi engine that was just as good. We ran fast with both of them. Tony liked to talk a lot, and we thought we’d shut him up.”

Despite his success, Delco disappeared from Pro Stock entry lists following the 1998 season. He returned to New York to devote more time to family and his business, Ken Delco Sales, which believe it or not sells envelopes. Idle for more than a decade, Delco got an opportunity to return and couldn’t pass it up. That was in 2001, and he’s still around with nearly 200 starts to his credit.

“I had a guy who talked me into buying a car and then stuck me with it,” said Delco, exhibiting the dry wit shared by many of his fellow New Yorkers. “I guess I’m addicted. I mean, I’d always thought about coming back, but this pushed me into it.” 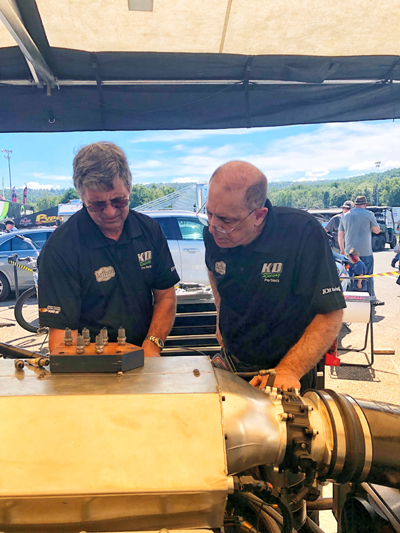 If Delco had needed any more encouragement for his return, Ron Capasselo and Frank Iaconio were happy to provide it. Capasselo is a longtime friend who helps provide financial backing for the team, and Iaconio is a Hall of Fame Pro Stock driver and engine builder, who not only won NHRA’s first 500-cid Pro Stock event in 1982 but also posted eight straight points finishes of fourth or better from 1977 to 1984. As much as Delco had the itch to return to the driver’s seat, Iaconio had a similar desire to prove he could still build competitive engines. Delco’s current team also includes his daughter, Erika, Val Smeland, who drives the second team car, John Cerbone, clutch ace Brian Moody, along with Jamie Yates and his father, two-time Pro Stock champ Jim.

“Ron and Frank are just like me, they really enjoy this; that’s the only reason we came back and the only reason we’ve stayed so long,” said Delco. “Frank and I think alike when it comes to racing. He’s never been a guy with a lot of money, but just a hard worker. Our whole team is just a bunch of die-hards.”

Moderately successful over the last few seasons, Delco has headed into 2019 with a sense of renewed optimism after entering an agreement with Chris McGaha to share data. McGaha supplied the engine that allowed Delco to qualify in the top half of the field at the first two events in Pomona and Phoenix. Outside the top 10 after two round-one losses, Delco believes he has the potential to make some noise going forward.

“Chris and his father, Lester, are helping Frank with his engine program, and we’re helping him with car setup,” said Delco. “When you run a single-car team, you’re at a big disadvantage unless you share data. So far, it’s been good for us, so I can see it continuing. I don’t think about making the top 10 or anything like that. If we’re competitive, we’ll go to the races. If not, we’ll stay home until we are. I do think that if we get lucky, we can win a race. My plan is the same as it’s always been; have fun and run fast. If it wasn’t fun, we wouldn’t be doing it.” 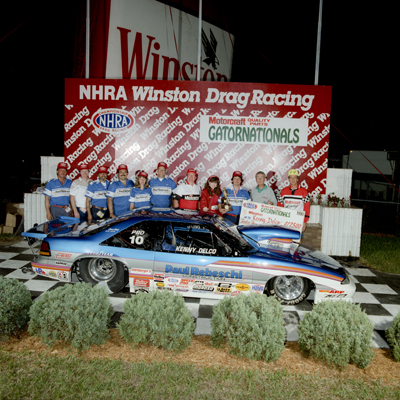 Kenny Delco was already five years into his Pro Stock career when he arrived in Gainesville for the 1990 Gatornationals. He qualified in the top half of the field in the first three events of the 1990 season in Pomona, Phoenix, and Houston and earned a semifinal and two quarterfinal finishes on race day. There were 45 Pro Stock cars in Gainesville, and Delco was seventh quickest in qualifying with a 7.34, 187.73.

On race day, Delco managed to avoid the rash of upsets on race day that claimed the top qualifiers. In the semifinals, survivors included Bob Glidden, Rickie Smith, and Scott Geoffrion, who was driving Kenny Koretsky’s second Camaro entry. “Trickie Rickie” not only left on Glidden with a .018 light but also outran him to the finish line, 7.38 to 7.39. Delco joined Smith in the final with a 7.40 run after Geoffrion fouled away a quick 7.34. Both drivers picked up in the final with Smith running a 7.36, but he was no match for Delco, who matched his best run of the weekend with a 7.28 to collect his first win. To this day, there are just 68 racers who can claim to have won an NHRA Pro Stock race, and Delco is proud to be one of them.

“I won’t forget that day; we were low e.t. of every round except the semi’s, where I shook the tires,” he said. “We changed the transmission for the final, and I knew that if we didn’t shake again, we’d have it. It didn’t shake. We did hurt an engine in the final, but thankfully, it wasn’t until after the finish line. That was also the only Grand Prix to win a Pro Stock race. That’s still quite an honor.”