To the uninitiated, Mile Salinas might look like a bit of an overnight success, scoring the first two victories of his career this season, but to him it’s just part of a plan that has come together since he first sat in a Top Fuel car in 2014.
22 Jun 2019
Phil Burgess, NHRA National Dragster Editor
Race coverage

To the uninitiated, Mile Salinas might look like a bit of an overnight success, scoring the first two victories of his career this season –- in Las Vegas and last weekend in Bristol –- but to him it’s just part of a plan that has come together since he first sat in a Top Fuel car in 2014.

He’s got one of the sport’s all-time talented and successful crew chiefs in Alan Johnson, he’s got a state-of-the-art Morgan Lucas Racing chassis, and a cadre of experience crewmembers to keep it running. But it certainly didn’t come overnight for the owner of the Scrappers Racing team..

“I’ve been stalking Alan Johnson for seven years and this may sound arrogant, but I usually get what I want, it was just that certain things needed to happen,” he said.

Those “certain things” included Johnson, Brian Husen, and the crew leaving John Force Racing, where they had wrenched Brittany Force’s dragster to the 2017 championship. Johnson had been providing tune-up help to Salinas last year, working with Salinas’ crew, but now Salinas has them all, and, to him, the difference is noticeable.

“These guys are so prepared; they come to the race with all of the parts ready, so all we’re doing is checking the weather and checking the track and replacing parts, not having to build things. All of the clutch packs, the cylinder heads, you name – it’s all ready,” he said. “They can turn this car around in less than 25 minutes, ready to fire up. Last week in Bristol, the engine spun a bearing and started while we were warming up before semifinals. They changed the engine in 17 minutes, including putting in the rods and pistons. We didn’t even get a chance to fire it up, and it went out and ran 3.81. 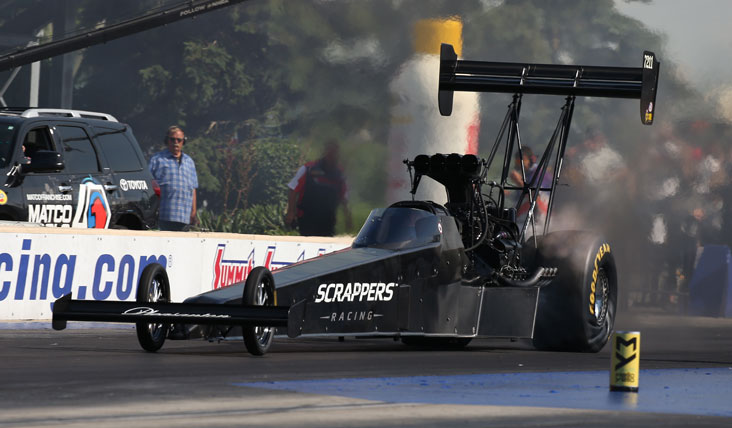 “I’m making runs that in my wildest dreams I never thought I would do. We really have something. We just have to do our jobs. We have a good car. Alan told me that this is one of the best cars he’s had in nine years in that it does what he’s asking it to do. Everything he throws at it, it wants more.”

Salinas is big on people doing their jobs. He knows what he expects of them, will give them the freedom to do it their way, but the results had better be there. He’s not one to micromanage but also not one to accept mediocrity.

“I have this real problem –- in racing and even at home –- that no matter how good you’re doing, I always think you can do better,” he admits. “We can make a great run and I’ll tell Alan, ‘I think it could go quicker.’ Even though I’m always pushing, I let Alan do what he does. You don’t hire a plumber and tell him how to fix pipes. You can’t hire a man and put handcuffs on him. At most of the races, we might not say but five or six words to each other. When I hire someone, I don’t want to be their buddy or hang around with them or go to dinner or drinks; I want to win races.’

Despite missing two events -– Atlanta and Topeka –- to attend to business matters at home, Salinas still sits third in points and thinks he can get to second.

“We can’t catch [Steve] Torrence unless we win the next five races, but I feel that we can get to second for sure,” he said. “We can start by winning this race. If we can stick to No. 2 or even No. 3, we have a good shot at winning the championship. All of the pieces are here to do it.”