He has a 20-year-old chassis and an all-volunteer crew. He’s run just four races over the past two seasons. How the heck did T.J. Zizzo end up in the No. 1 qualifying spot at the Amalie Motor Oil NHRA Gatornationals Friday?
16 Mar 2019
Phil Burgess, NHRA National Dragster Editor
Race coverage

He has a 20-year-old chassis and an all-volunteer crew. He’s run just four races over the past two seasons. How the heck did T.J. Zizzo end up in the No. 1 qualifying spot at the Amalie Motor Oil NHRA Gatornationals Friday?

He’s never been a low qualifier other than when his was one of the first cars in a first qualifying session, which explains why he didn’t know that the media was waiting to interview him Friday night and needed directions to get to the media center. He showed up late because he’d been looking over his parts instead of celebrating or patting himself on the back. 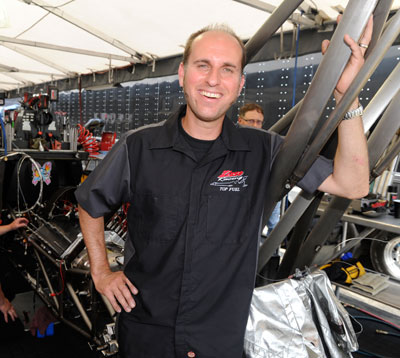 The Zizzos may be a part-time team but they’re fulltime passionate about Top Fuel. They don’t have anywhere near the data and certainly not the budget of the “big” teams but they invest what they get wisely.

“Last year we made 21 passes,” he verified. “Antron Brown probably made that in pre-season testing and he’s got two other teammates to get data from. Together, they’re making hundreds of runs each year; we’re making 20. So either we’re really smart or they just have some homework to do. When we come out here and outqualify fulltime teams, it’s impressive, but we work really hard to shorten up that lack of knowledge.”

Zizzo may be a smooth talker but he’s also a good listener, all of which goes a long way towards explaining the initial question. Zizzo was effusive in his praise of multi-time nitro world champion Rahn Tobler, who befriended Zizzo years ago and continues to provide a sounding board for the independent team. Tobler doesn’t tune the car per se –- longtime crew chief Mike Kern gets that credit -- but Tobler is an invaluable asset and good friend. Yet it wasn't just that.

It’s been a long ascent for the team, with a trail of broken parts and broken hearts along the way, but it all came to fruition with a 3.762-second pass Friday night that put them into the No. 1 spot. Chalk it up to a "weight" and see attitude.

The team, which is based out of the Zizzo’s family’s bodyshop in Lincolnshire, Ill., spent the winter trimming weight from their car, spending almost $60,000 to pare more than 100 pounds of weight and the results were immediate. On their first run Friday then ran 3.827, third best of the session then followed with the stunning 3.76 that outran every other dragster on the grounds. 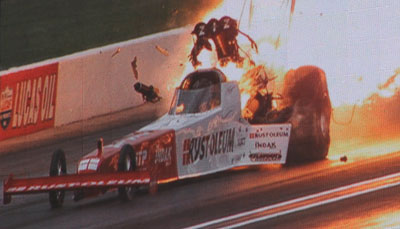 “We struggled with our tune-up for a number of years,” he reflected. “In 2014, we blew it up at Indy really bad. We had stepped up from Stage 5 cylinder heads to Stage 7 and we were putting so much more fuel into the engine and hurting a lot of parts. The next year, we switched around our fuel system under Rahn’s guidance but we were still hurting parts and just figured that was what was going to happen when you run as hard as we were trying to run. Then, in 2016, I’ll never forget Eric Lane, who was Rahn’s right-hand man at the time, just pounding his fist on the cabinet in our trailer in Seattle trying to get to me to understand that there’s a difference between static compression and blower compression and how we were way over center. So we took .020 compression out of it that night –- we had to buy shorter rods to make that happen -- and we didn’t run well but it was clean, and then started working on the performance.

“The car would run good, but we were doing .840 60-foot times and we’d see guys like [Steve] Torrence cutting .813s and .820s and we knew it had to be weight. We were usually 130 pounds heavy every time we went to the line, so we started looking at that. I spent a long time on the phone with [Torrence crew chief] Bobby Lagana about the weight and then took the car to Murf McKinney, who built this car for us in 1999. He came back with a line-by-line list of areas we could lighten and how much each would cost. I ended up just telling him to do it all.

“We bought a lot of titanium parts, but it came from everywhere. We had a rear end in the car that we had been running since the ‘90s – steel axles, old housing – and that alone saved us 36 pounds of weight. We went with shorter body panels; that was 10 pounds. Removing paint off the car – front wing, rear wing, mudflaps, body panels – was about 20 pounds. Extra chassis bracing we had added over the years that we no longer required by the rules came off, too. 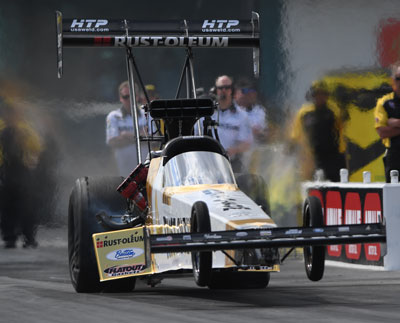 “On the first pass Friday, it hiked the front end up – probably made for some good pictures; I could almost see the photographers under my front tires – and it set down and meandered a little, but that was me. We’re still learning about weight transfer with this car. We’ve been doing this for a long time, but we always learning. We thought our center of gravity would be exactly what it was, but apparently it wasn’t. We tacked five pounds of weight on the front so that I could steer it and you saw what happened.”

What happened was crew members jumping for joy when the time flashed onto the Gainesville Raceway scoreboards; one crewmember even broke into tears, according to Zizzo, who was as happy for them as he was for himself.

“Not one of our crew is a full-time member,” he explained. “They’re all volunteers who do it because they love it. Most of them have been with us for at least 10 years. One guy, Tony Smith, who does our clutch, has been with me since we were young kids, back to when I first stepped on the gas in an Alcohol Dragster back in 1991. I’ve traveled the country with him, up and down the road in a duallie crewcab and has always been my voice of reason and I’ve probably paid him about 50 cents.

“Late last year I told them I wanted to race more in 2019 -- they haven’t heard that from me in a long time -– but we have a new associate sponsor, Bob Button, who owns Button Transportation out of Sacramento, Calif., and most of the money we’re getting from him is going to go to those crewguys. We spent the last three or four years buying good parts, building an inventory, doing the right thing for the race car, but not for the team guys. Finally, I get to give back.”