With his 505th start, Doug Kalitta is officially Top Fuel's most experienced driver

With his appearance at this weekend’s Magic Dry Organic Absorbent NHRA Northwest Nationals, Doug Kalitta is the new owner of an impressive stat: Most events competed in the Top Fuel class in NHRA history at 505.
04 Aug 2019
Phil Burgess, NHRA National Dragster Editor
Feature

Doug Kalitta says he didn’t see it coming but suddenly, with his appearance at this weekend’s Magic Dry Organic Absorbent NHRA Northwest Nationals, he’s the owner of an impressive stat: Most events competed in the Top Fuel class.

This event is Race No. 505 for the veteran dragster pilot and nephew of nitro royalty Connie Kalitta. He started the season at 489, 15 behind eight-time world champ Tony Schumacher, but with Schumacher idle this year, it only took until race 16 of the season for Kalitta to assume the lead. Larry Dixon is a distant third behind the Top Fuel legends with 420 starts. (John Force is the all-time events leader with 777 starts counting this weekend.)

“I had no idea of what the numbers are until they told me this weekend,” Kalitta said. “I know it’s been a lot of years and a lot of races, but I don’t really keep track of those stats.”

When you consider all of the legends who have competed in the class since its inception in 1963, it's a stat worth crowing about, but that's not Doug's way, so we'll do it for him. 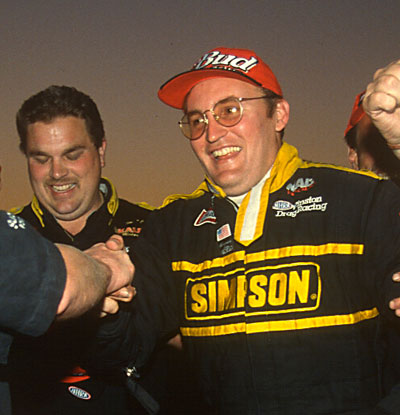 Kalitta’s first start in Top Fuel came at the 1998 Winternationals, where he replaced his cousin, Scott, in the seat of the family fuel dragster after Scott, a two-time season champion, decided to take some time off from the sport.

Doug had been around nitro racing for much of his life, and actually did the hot and messy job of bottom-end diver from 1982 to 1989. No one was talking about a third dragster, so Doug channeled his energy into oval racing.

Doug was pretty damned good, too. He was the 1991 USAC rookie of the year in the midget series, and won the 1994 championship in the sprint car category. He won 21 USAC events: 14 in midget races and 7 in sprint competitions. He often credits the car control he learned racing those cars with his reputation for pedaling his Top Fuel dragster.

“Connie and Scott were driving and there was no way another car was going to happen, so that’s when I got into sprint- and midget-car racing,” he remembers. “Then when Scott decided to retire, I thought I should give it a try when Connie asked me. It didn’t take a lot of convincing.”

He’s competed in 1,152 rounds of racing and when you consider he’s probably averaged 3-4 qualifying passes at most of them (with weather delays, etc., canceling some sessions, let’s just call it an even 3), you’re looking at well north of 2,600 laps but it only took him about 100 to get his first career win, in Sonoma in 1998, the same year he won the Auto Club Road to the Future award.

His career statistics are pretty gaudy: 45 event wins, 52 runner-ups, and an even 50 No. 1 qualifying berths against just seven DNQs (none since 2010). His win-loss record of 670-452 is well north of 50%. He’s finished in the top 10 in points in all 21 seasons and finished a career-high second four times and third four times.

There are two glaring omissions from his resumé, the first of which is evident in the previous paragraph -– he’s never won the championship -– and the second is that he’s never earned the sport’s other great honor: winning the Chevrolet Performance U.S. Nationals.

Not that he hasn’t come close to doing both. Anyone who knows his history remembers the painful expression on his face when Schumacher picked his pocket with “The Run” at the 2004 Auto Club NHRA Finals and he’s been the Indy runner-up three times: twice to Schumacher in 2004 and 2008 and then last year to first-time U.S. Nationals winner Terry McMillen. Kalitta left on McMillen, .047 to 071, but the engine dropped a cylinder and he lost by just .006-second.

“If I had to chose between winning just one of those two, it would definitely be the championship,” he said. “I can’t complain though It’s been a great career and I’m not ready to hang it up yet. It’s been fun because we’ve always run up front, and as long as we can do that I’ll still be very interested. I’ll keep at it.”