Funny Car racer Jack Beckman remains difficult to define, but we give it our best shot

Jack Beckman has competed in more than 300 races, won 28 of them and appeared in more than 50 finals. The Super Comp and Funny Car world champion remains one of the most interesting figures in the sport all these years later.
30 Mar 2019
Jacob Sundstrom, NHRA National Dragster Associate Editor
Feature

The garage sits behind a motorhome, well removed from the house of two-time world champion Jack Beckman. A JEGS.com banner serves as the only adornment, and the space is relatively neat, save for stacks of parts on shelves and a mini-bike resting against a wall.

I’m not very nostalgic,” he said while standing over a 1968 El Camino. “Well, I guess this is the exception.”
He started restoring the Chevy nearly three years ago. The Super Comp and Funny Car champ got his license in the car, which he first laid eyes on while shucking Christmas Trees at 12 years old. 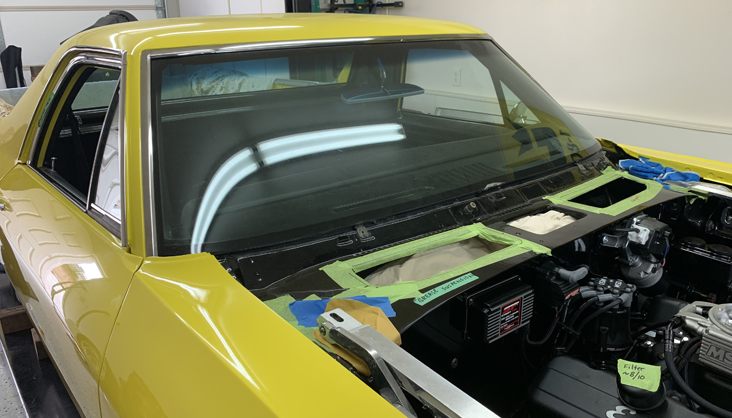 “My dad [Bob] showed up in a two-door car to pick up my brother and me, and I think our eyes kind of popped out of our heads,” he said. “My brother is only a year older than me, but he had about 50 pounds on me at the time, so I basically had two options for seats at the time — the center console or the truck bed.”

Beckman’s father snared the El Camino for $1,000 and sold it to his son for, you guessed it, $1,000 four years later. That might not sound like much of a deal, but the future champ had his first daily driver and his first drag car. 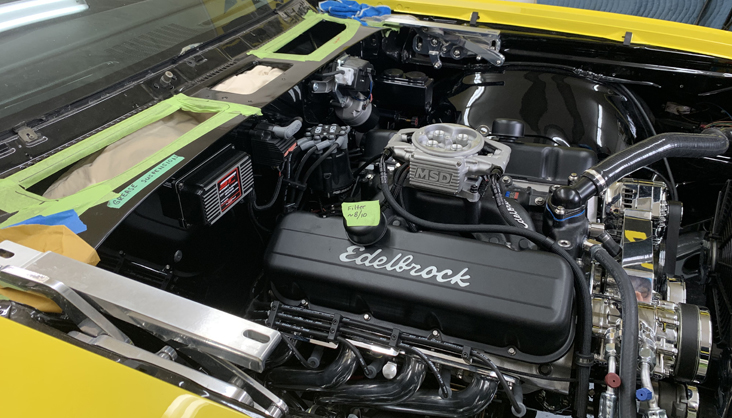 He took the El Camino down the quarter-mile, to the drive-in, but not along for the ride when he joined the United States Air Force after he dropped out of high school. His parents divorced before the El Camino entered the picture, and Beckman left the Chevy with his mom. He asked her to start it up once a month — she did a little more than that.

“She’d tool around town in it, you know? It was objectively a cool car,” said Beckman, explaining a little bit of his nostalgia in the process. “My mom died in [the mid-1990s], and this is the only car I can drive that she also drove.” 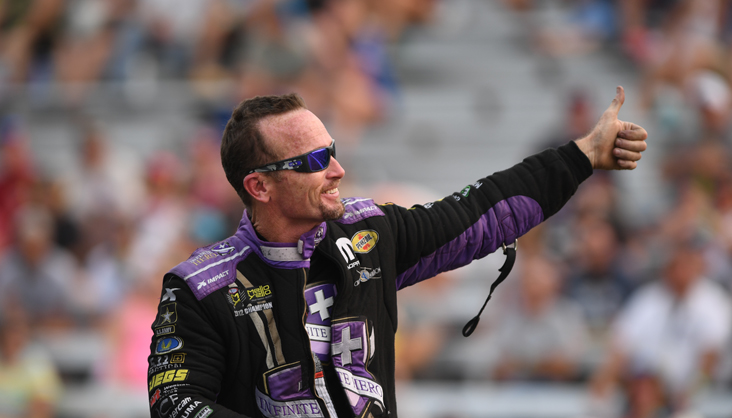 Beckman raced Super Comp full time throughout the 1990s while making a living as an elevator attendant. That may not sound possible for someone relatively young, but that rings true for much of his story. He’s not an old soul, but he does make for something of a jigsaw puzzle.

“I was making more than 200 runs a year in the Super Comp car and racing about 23 weekends a year,” he said. “It’s a lot, but I know there are racers doing more than that.”

That follow-up statement says a lot about Beckman. He’s always correcting himself, the quintessential self-awareness of someone who wants to make sure he’s being fair to the person he’s talking to. Or perhaps he wants to be fair to himself; a part of his self-critical nature.

“I don’t walk into most rooms thinking I’m going to be the smartest guy there,” he said. “It’s pretty much a fat chance, honestly. But I think I can be a good leader at times, and a big part of that is knowing when it’s your time and when it’s not your time.”

Beckman’s father loved hot rods, but it was his uncle on his mother’s side that first took him to the drags. He knows more about NHRA Drag Racing than most people on the planet, but he doesn’t lord the knowledge over anyone — instead, Beckman seems thrilled to share his knowledge with anyone with time and an ear to listen. 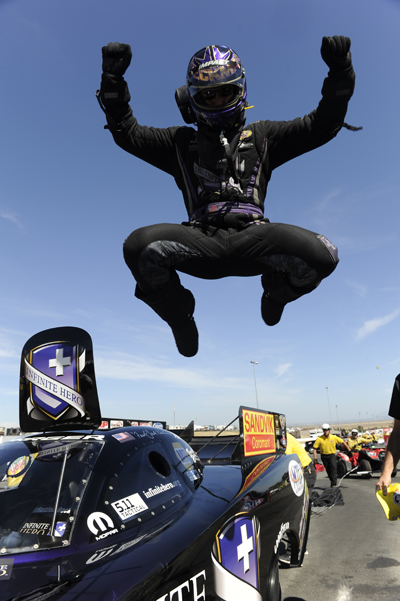 “You go through the lanes, and it’s just a big deal as a Sportsman guy to have the Alcohol racers know who you are at a certain level,” said Beckman. “I think a big part of it is that nitro always seems like a bridge too far, you know? Alcohol is so badass in its own right that it seems like … yeah, I can dream that far.”

He got that far, obtaining that license and making his debut in Las Vegas on a fill-in basis in 2003. That coincided with him winning the Super Comp world championship. Beckman was diagnosed with cancer shortly thereafter and went through eight months of chemotherapy before returning to racing.

Beckman doesn’t find much interest in his cancer recovery defining his identity, much like his military service. It goes back to his almost defiant self-awareness — he’s self-assured enough to choose to create his own self-identity rather than allow others to do it for him.

“People coming up to me and thanking me for my service isn’t really why I did it,” said Beckman. “I didn’t do it to be called a hero, because frankly, I don’t think doing it made me a hero. The work we do with Infinite Hero is something I’m proud of, but that’s something that’s separate from what I did in the Air Force.”

Beckman returned to racing in 2005 in Super Comp and saw Comstock in the staging lanes. Comstock walked over and simply asked, “You really want to do this, don’t you?” 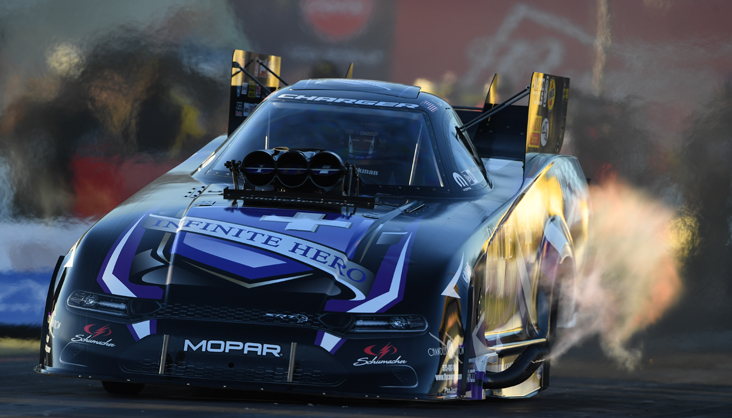 Beckman always considered himself a Top Fuel guy. He considered Funny Cars cool (join the club), but it just seemed more practical to drive Top Fuel. But he knew his arrangement in Top Fuel with Dexter Tuttle was closing after the 2005 season.

A few conversations with Jim Dunn Racing and Don Schumacher Racing during the offseason didn’t turn into anything. Fair enough. He knew he could return to Super Comp in 2006 without his pride wounded. He raced in Top Fuel for half a season, far better a fate than he previously considered possible.

Then his phone rang on the way to a divisional race in Reno in 2006. Don Schumacher was on the other line.
“What are you up to?” Schumacher asked.

Beckman made his debut for Don Schumacher Racing in the Matco Tools Funny Car at the Keystone NHRA Nationals in 2006. That’s Reading, for the uninitiated. He won his first race in Las Vegas just four events later. He qualified No. 1 at his hometown race, the NHRA Finals, and lost in the final to John Force while setting the elapsed time record thanks to Force’s standard chunk-it-in holeshot methodology.

Regardless, with Todd Okuhara and Phil Shuler on board, Beckman had an incredible crew and a great ride entering the 2007 season just a year removed from believing his nitro career was over. In reality, it had just begun.

“A job that might take someone else 15 minutes takes me a few hours,” he said, after rattling off another list of modifications, repairs, and overall improvements made to the El Camino. “I’m not a perfectionist, I’m not overly ambitious, and I don’t consider myself a neat freak. This car has proved to be the exception to the rule in a lot of ways for me.”

Beckman doesn’t shy away from introspection, whether it’s in his garage or during a top-end interview. He’s not going to quip after beating John Force — he self-deprecatingly says it’s because he’s not smart enough to “play the game” for television. The truth may simply be he’s too honest to not be himself even for a few moments after going 300 mph.

He won his first, and at this point only, Funny Car championship in 2012. He did so after losing crew chief Rahn Tobler early in the season and is currently enjoying his longest run of continuity since joining Don Schumacher Racing with Dean Antonelli and John Medlen at the helm. 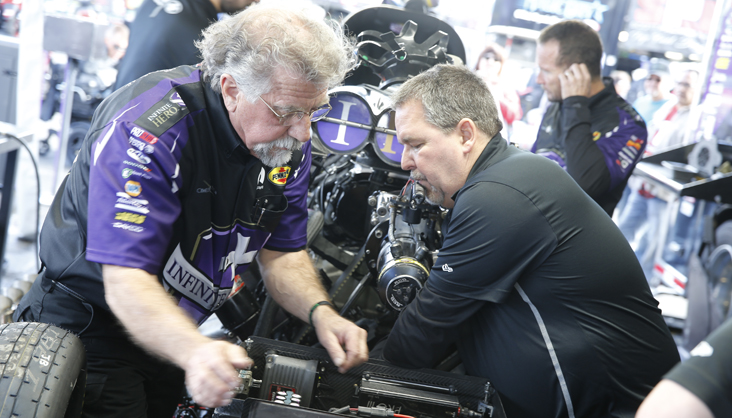 “I’ve had a lot of crew chiefs over the years, so maybe I’m not as likable a guy as people like to tell me,” he joked — brushing it off because, well, there’s not much else to do. Infinite Hero will continue to sponsor Beckman’s Funny Car through 2020 — that’s not a bad deal at a time when the winningest Top Fuel racer in history is on the sidelines and John Force scratches and claws for every penny he has. But there’s no such thing as security in drag racing.

“When someone comes up to me and asks, ‘What do you know about so-and-so?’ I think I see that as an opportunity to make them think about it in a different way,” Beckman said, revealing a little bit about how he wants to be seen in the process.

Beckman forces people to view him three-dimensionally and wants them to do the same for his fellow racers (and, frankly, everyone else). It doesn’t frustrate him when he’s described as a veteran first or solely as a cancer survivor, but those flat depictions don’t make sense when talking about anyone. That he drives a Funny Car for a living doesn’t define him in the same way one piece of your life doesn’t tell anyone’s story.

Then his phone rings for the fifth time that morning. This time, it’s his wife, Jenna — she wants to know if he’s going to be able to pick up his daughter, Layla, from school. Hey, he’s a busy guy.