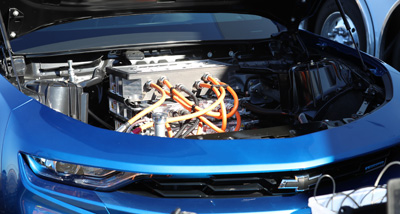 Fans who attend the Lucas Oil NHRA Winternationals will get a glimpse of drag racing’s future, although they might not be able to hear it.

The eCOPO Camaro, an electric drag racing car that represents the cutting edge of alternative fuel and zero emissions vehicles, was introduced last fall as part of the 50th anniversary celebration of the original COPO Camaro project. The one-of-a-kind prototype is scheduled to make exhibition runs in Pomona, and there is a very real possibility that the car will break into the nine-second zone for the first time.

The gasoline-burning V8 that normally sits under the hood of the COPO Camaro has been replaced by a twin electric motor pack that generates 760 hp and an impressive 651 lb-ft of torque. Four battery packs weighing 175 pounds each are mounted near the back of the rear-wheel-drive car to give it better traction off the line and use next-gen 800-volt technology, twice what today’s electric cars use, for quicker charging and discharging. Unlike many electric cars that use direct drive, this one is a true swap with the motors installed under the hood and connected to the COPO’s three-speed automatic transmission.

To build the eCOPO prototype, General Motors enlisted veteran racer Jeff Lane and partner Patrick McCue. Lane, half of the successful Hancock & Lane team, is an 11-time NHRA national event champion in Super Stock and Comp, and McCue is a high school shop teacher at Bothell High in the Seattle area and a two-time National Electric Drag Racing Association [NEDRA] series champion. The duo has worked together on previous electric vehicles.

“We’ve built two other 800-volt electric cars, one was a High School project car, a Jerry Bickel ex-Pro Stock Firebird called Shock & Awe,” said McCue. “We hold the NEDRA record at 8.32 and 166-mph. We also built an electric dragster that has run 7.70s but this car was a little different. It threw us a bit of a curve”.

“The first cars we built didn’t use a torque converter,” Lane added. “We just bolted the electric motor up to a Powerglide transmission and it was hard to handle all that torque. We’d get it to hook up and the car would hop. In our discussions with GM, we agreed that we needed a torque converter to control the power. That was a big help.”

The electric motors and batteries for the eCOPO were designed and manufactured by GM in Michigan, and then shipped to Seattle, where McCue and Lane installed them under the hood of the eCOPO. The dual-stack motors are designed to bolt right up to any transmission that can handle a Chevy LS motor.

When the car made its debut at the 2018 SEMA Show in Las Vegas, Chevrolet touted its ability to run nine-second quarter-mile times and so far, the car appears to be right on schedule. In a recent pre-season test at Wild Horse Pass Motorsports Park near Phoenix, McCue drove the car to a 10.03 best at over 138-mph. 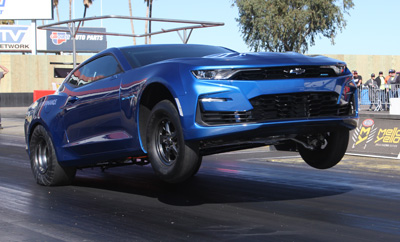 McCue has made over 175 runs in electric vehicles, but he admits that driving the eCOPO is a slightly different experience largely because of the lack of exhaust noise.

“Down track, you can hear the converter spinning and the transmission and rear-end. It’s not truly silent but it’s much quieter than a gas car,” said McCue. “You can hear the tires chirp on a gear change.”

There are other significant differences. With the addition of the torque converter, the eCOPO drives much like a traditional internal combustion vehicle. In most areas, the driving technique is the same.

“We use the standard COPO driveline in this car, so the motor does idle at about 800-rpm,” said McCue. “That keeps the pump spinning, so we have pressure in the transmission. We also have a two-step to control the launch. Our other electric vehicles did not have the idle capabilities that this car has. You’d just sit there in silence and when you released the transbrake it would instantly go to full power. With this car, you use the footbrake just like you would with a traditional Stock Eliminator car.”

McCue and Lane have a very specific plan for their exhibition runs in Pomona with the end goal of producing the eCOPO’s first nine-second time slip. They are convinced that their goal is very attainable.

“We’re going to start the same way we did in Phoenix and go with an 80-percent ramp rate for the first run,” said McCue. “That should produce a nice low 10-second run. Then we’ll turn it up a little and try again and see how it reacts. We should be able to put this car in the nines fairly easily.”The arrival of the eCOPO, and the tremendous among of media attention it has generated begs the question. Will electric vehicles ever replace traditional internal combustion race cars on America’s drag strips? 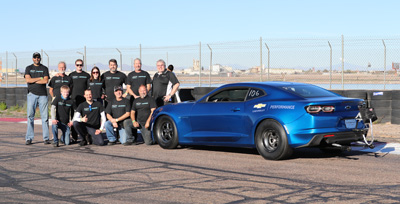 Certainly not any time soon, but NHRA was founded more than a half-century ago on the premise of inclusion, innovation, a place to race for everyone and everything. To that end, electric vehicles will certainly have a larger role going forward. The launch of the eCOPO also fits nicely with NHRA’s current “Speed for All” campaign which hints at the association’s mission to foster and maintain an environment of inclusiveness and diversity.

“We’re already working with NHRA on some safety rules and a few other things,” said Lane. “It’s very interesting because when we have our other electric cars at the track, they are surrounded by kids; they love these cars. The times are changing and the eCOPO is a perfect segue because the electric motors are an option. You can order a COPO with a naturally aspirated 427, a blown 350, and soon perhaps, the electric combination because it bolts right in. I certainly hope we’re going to see more classes for electric cars in the near future.”