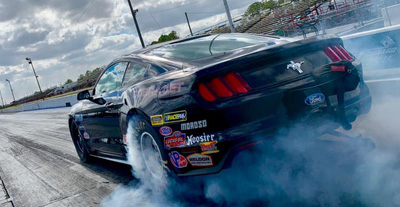 Earlier this week, several of the leading contenders in the School of Automotive Machinist and Technology Factory Stock Showdown gathered for a private test session at Bradenton Motorsports Park in central Florida and National Dragster’s technical contributor Evan J. Smith was there to capture the action.

With several notable rule changes for 2019, including the approval of new supercharger technology, it was widely accepted that the Factory Stock class would easily eclipse last year’s record performances. Heading into the new season, Mark Pawuk’s 7.92 elapsed time from last October’s St. Louis event has been the performance benchmark for the class, and that was blown away on day one by Kevin Skinner, who shut his Cobra Jet Mustang off early, yet still tripped the clocks with a stunning 7.82 at just 156.03 mph. Skinner, last year’s fifth-ranked driver in the class, registered a 1.17-second sixty-foot time and a 4.96-second eighth-mile, the first sub-five second pass for a Factory Stock car. His car is powered by engines from fellow Factory Stock racer Chris Holbrook. 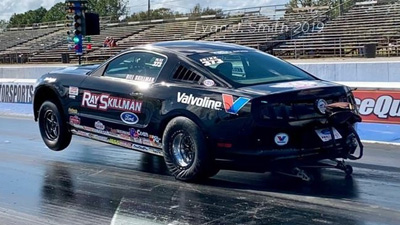 In addition to Skinner, the other participants in the test included fellow Ford racers Bill Skillman, and 2017 NHRA Mello Yello Pro Stock champ Bo Butner. Skillman also used Holbrook power to trip the timers with a 7.87 at over 174-mph. Later in the test, he took advantage of premium conditions and lowered the unofficial class record with a 7.810, 175.13 pass.

"Our Bradenton test had its ups and downs but we are getting better," Skillman posted on his Facebook page. "I want to thank our team, Tomi Laine, Dave Yediny, Anthony Bivens and Joe Gwin for busting their butts to get our car ready to test. Thanks to Chris Holbrook for building some fantastic steam to power our Cobra Jet. It's going to be a hell of a year for the Factory Showdown class this season."

The Chevy COPO Camaro contingent was represented by Scott Libersher and Doug Hamp, both using engines from Ray and David Barton. Libersher also found his way into the sevens with a 7.99 at 171-mph while Hamp was not far behind with an 8.04, 170.00 run in his COPO.

“We came down here to test a few things and see what kind of progress we’ve made this winter,” said Barton, “Testing went great with our new Magnuson superchargers. It’s amazing how much more efficient they are. The air coming out of the unit is colder than the air going in. The past two days we had a great time sorting out the new combination. So far, it looks like we’ve made some wise decisions and hit it pretty close the first time out but unfortunately, it’s not enough to beat up on the Fords just yet. They ran some pretty impressive numbers and set the bar pretty high. So, now it’s back to the drawing board for the Barton team and we’ll be back in two weeks for more on-track testing.” 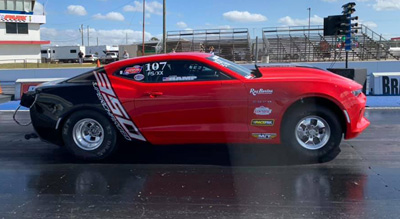 In addition to the entries of Libersher and Hamp, Barton is also working on a number of other entries for the Factory Stock class, including his own COPO Camaro that is owned by Gary Wolkwitz.

“This week I was playing crew chief,” said Barton. “We’re still working hard on our other cars. It’s hard to say where the class is going with so many unknowns at the moment. I can say one thing, it’s going to be very exciting in Gainesville with all these new cars and hp upgrades. NHRA is going to have their hands full. In my opinion, it’s the most exciting class to watch in 2019.

Butner was making the first runs in his new 2018 Cobra Jet, a hand-built masterpiece constructed by his longtime crew chief, Darrel Herron. In addition to all 18 Pro Stock events, Butner is also committed to the full eight-race schedule of Factory Stock races this season. After a couple of shake down runs on Tuesday, Butner also joined the list of drivers who possess a seven-second time slip. 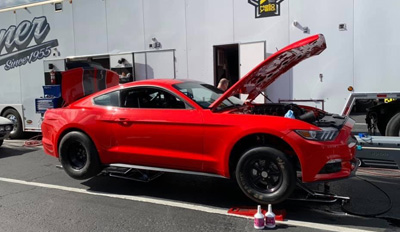 “The new car is awesome,” Butner said. “On the third run it went 1.19 in sixty feet. I shut off but it was going to run a low 7.9. I’m very pleased. We loaded up and headed back to Floyds Knobs [Ind.] We’re going to pull the engine out, go through it, change a couple of things and then go back out to test some more.”