Don Garlits: Destiny, history, and victory at the Gatornationals

Drag racing legend "Big Daddy" Don Garlits shared his thoughts about his homestate race, the Gatornationals, and his long history, successes, and frustrations at one of NHRA's most storied events.
13 Mar 2019
by Don Garlits
Feature

In 1956, I wrote a letter to Hot Rod magazine complaining that they weren’t giving racing in Florida the kind of coverage I thought we deserved.

I understood that drag racing had originated on the West Coast, where the aircraft industry was located, and there were a lot of talented machinists who were making hot rod parts. We looked in awe at what they were doing in California, and everyone thought the Californians couldn’t be beat because they were so fast.

But we had a lot of good racers in Florida, too, and a lot of racetracks. We had Tampa Dragway and Golden Triangle Drag Strip in Oldsmar — a track that some friends and I had built — and also ran on all the airports: Miami, Lake Wales, Fort Myers, Zephyr Hills, and Lake City. Lake City had been the last stop that the NHRA Drag Safari [now the NHRA Safety Safari] had made in 1955 before they headed to the Nationals in Great Bend, Kan., that year. Still, I didn’t think Hot Rod was giving the attention we should have been getting, so I wrote them a letter. 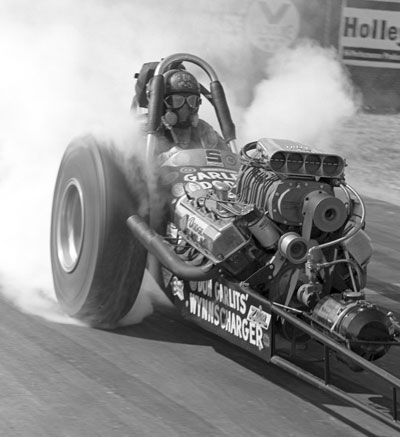 When NHRA created the Gatornationals for 1970, everything changed for us. Suddenly, instead of us Florida racers having to go on the road to show what we had, people were coming to us, and you’re darned sure we were ready for them on Florida soil. It was the first time I can remember all of the big racers coming to Florida.

We really loved the idea of an NHRA national event in our backyard because before then we had to go way far away, to Indy or Dallas at the time, for the closest national event. Now, it was coming to us.

We’d be running at the Gainesville track for more than a year — they had a race called the Turkey Trot Nationals — and it was a nice place to race. As I remember, we had a pretty good crowd that first year, and I definitely wanted to win that race. We had the best car, but we broke the transmission in the semifinals. Of course, a few weeks later it broke again on me in Long Beach [Calif., at Lions Dragstrip] and hurt me pretty bad.

I won the race two years later, in 1972, and that really felt good. We beat Clayton Harris in the final. He had a big sponsor and had set the national record at Lions a few weeks earlier at 6.16 and was touted to be the real killer, but we ran 6.15 earlier in the race and took him out in the final.

I won the race again in 1977 and 1978 and should have won it in 1982 when I raced Shirley Muldowney. We had to change engines before the final, and our engine had a bad intake gasket. I wanted to change it, but my crew chief, T.C. Lemons, said it would be OK, but it wasn’t, and we only ran on seven cylinders and lost. I gave that one away listening to someone else when I should have known better. That’s one of my two toughest losses (the other being against Steve Carbone in Indy in 1971), but I’ll get to run her this year in the Unfinished Business competition. I owe her one. I hope those Toyotas have some real moxie. 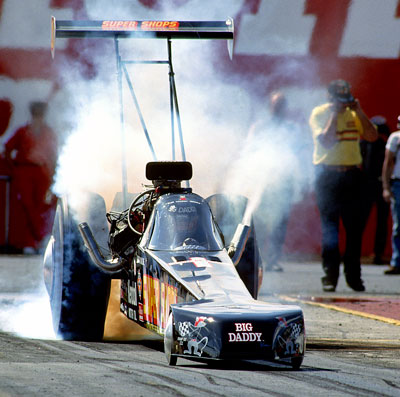 Fans might not know, but I also ran my fastest career speed, 323.04 mph, at the Gatornationals in 2003 with my monowing car. Here’s something that people probably don’t know about that run: Because the track is so long, I drove it 200 feet past the finish line under full throttle, and the wheel speed that was recorded by the computer was 340 mph. We took the engine apart, and there wasn’t anything wrong with it.

The Gatornationals were extremely good to me in my career and still hold a special place in my heart. Today, I almost get more fun out of going into the grandstands and sitting with the fans when the fuel cars are running. I love to talk to them and get their feedback on the racing. I get real enjoyment out of that.

The Gatornationals week is always a huge one for my museum in Ocala, too. I bet that we see four times as many people as we do any other week of the year. It’s just 40 miles down the highway from Gainesville, and we get a lot of fans and racers who stop by to see my collection. I invite anyone who’s at the race to stop by and see drag racing history.

Don Garlits is a drag racing legend. Racing in multiple sanctioning bodies, he amassed 17 season championships and 144 national event wins in Top Fuel. He is credited with creating the first successful rear-engined Top Fuel dragster and numerous other innovations. In 2000, he was voted to the No. 1 spot in the list of Top 50 Racers in the association’s first 50 years.