Brittany Force ran a blistering speed of 338.17-mph to reset the national speed record on Friday night by nearly a full 2-mph. The previous speed record (336.57) was run by Tony Schumacher, tuned by Mike Neff, and set in the cool, crisp air of Phoenix.

That makes the pass made by Force all the more stunning. David Grubnic is now the tuner of record on four of the five fastest speeds of all time with two different drivers in the seat. Force made what is now the fourth-fastest speed of all time in Sonoma, a track known for incredible speeds (see: Hight, Robert). Las Vegas is not one of those tracks.

The altitude makes Vegas a place where expectations are metered, not shattered. Grubnic has made a habit of turning Top Fuel on its ear over the past three years and he did it again during Friday qualifying. He did it with incredible back-half speed, which has become a calling card for the Australian.

Force ran 295.66 to half-track, which ranks as the seventh-fastest among the top 10 speeds of all time. She picked up a staggering 42.51-mph in the back half of the track, the second-most of any time on the list. Only Shawn Langdon's 334.15-mph burst in 2012 had a better second-half pull (45.69). That pass was tuned by Alan Johnson in Brainerd in October, another track known for amazing performance.

Grubnic said after the run (which you can see below) he was looking for the 3.659-second elapsed time, which did not even set the track record, but was surprised by the big speed. There is not a significant correlation between elapsed time and speed, but few crew chiefs will turn away extra horsepower when presented with it. 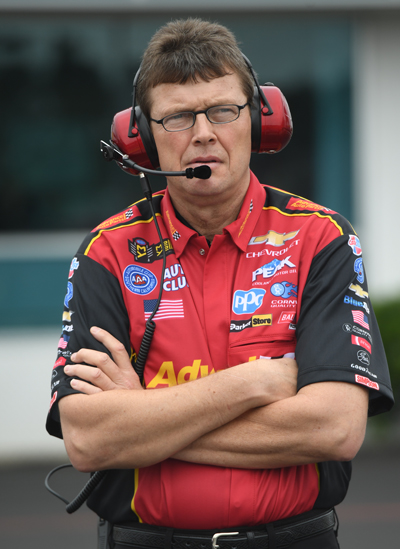 “When we set the e.t. record in Reading with a 362 it only ran 331 because we dropped a cylinder 800 feet into the run. We have been dropping cylinders as we get close to the finish line, but we haven’t really chased it this year because we want to keep the engine in what we call the ‘happy zone’; if it drops a cylinder down there it will wash off some speed but it doesn’t give up a lot of e.t. It’s a little insurance policy. I don’t want to risk getting it too hot and having a failure. On the run last night, I had two cylinders that were protesting a little –- they were getting a little too hot -– but that helped us make the power. It’s just a simple fact: We have vehicles that all weight the same and we have to accelerate it this fast and we have to all push it through the same air, and is everything else is a constant, it has to be power. What else could it be?

“Everything just came together to make it run like that. The air is thinner here in the high desert and we also made more power here because the air is bone dry and cooler temperatures and it didn’t drop any cylinders. In short, all it takes is the least amount of aerodynamic drag, make as much power as possible, and have good grip from the track. We had all of that last night.”

Force is chasing pole position for the ninth time this season. That would give her a leg up as she chases Steve Torrence for her second world championship, which would be the first for Grubnic, who dueled tuner Richard Hogan for a title a season ago.