Accountability is key for David Grubnic 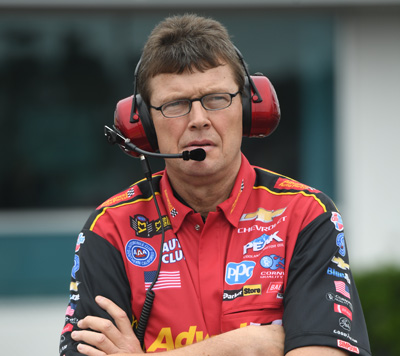 When it comes to the performance of the Advance Auto Parts Top Fuel dragster, crew chief David Grubnic has little to apologize for, but the affable Aussie is big on accountability so he’s willing to take the heat for the fact that his driver, Brittany Force, has gone winless through the first four races of the 2019 season.

“That’s on me,” said Grubnic, who joined John Force Racing this off-season after a much-publicized split with the Straightline Strategy Group at last year’s season-ending Auto Club NHRA Finals. “We’ve seen an uptick but at the same time this has been very challenging and humbling. It’s not for a lack of effort. I try to remember that it took us four years to fine-tune our combination to find that happy window [with the Straightline team] and now I’ve moved over to JFR and I’m using all of their components."

Grubnic is more than pleased to have access to a fresh supply of new parts manufactured in-house at the Force American Made machine shop in Brownsburg, but he acknowledges that its taken a bit of time to become familiar with the characteristics of the JRF heads, superchargers, intake manifolds, injectors and other related components.

“There is absolutely nothing wrong with those parts; in fact, they are fantastic, but I guess I may have underestimated the personality of these parts,” he says. “The JFR clutch has a different personality than what I’m used to and the same can be said for intake manifolds and cylinder heads and things like that. They all have their own unique characteristics. From the beginning I told John, ‘We’ll adapt’ and we have, but not as quickly as I’d hoped.”

In a sport where big egos are easy to find and hard to hide, it’s refreshing to see someone who’s willing to look at themselves in the mirror and say “the buck stops here.” As a driver and a crew chief, Grubnic has never been one to play the blame game and he’s not about to start now.

“We all have to answer to someone and the first person I answer to is myself,” said Grubnic. “Part of the deal I made with John last winter was to put together a winning program that would also be cost-effective. You can push it and run 3.60s on every run and level the engine on every run but that doesn’t help anyone. I’ve worked hard to be cost-effective and not destroy a lot of parts. John and Robert [Hight, president of JFR] have been fabulous and the same it true for the other crew chiefs here. We’ve shown sporadic flashes of brilliance but I’m not into being a one-hit wonder.”

When it comes to his crew, which includes many members of last year’s Straightline team including car chief Mac Savage, Grubnic is thrilled to see so many familiar faces. He’s also more than happy with the performance of driver Brittany Force, who he says has been a dream to work with.

“First off the crew is our most important asset,” he says. “You’re only as good as the people you surround yourself with and their attidutes towards winning. You want people who’d want to jump off a cliff for each other and we’ve got that here. As for Brittany, she’s got some fabulous traits that [former crew chief] Alan Johnson instilled in her. AJ turned her into a championship driver and I’m not about to change that. She flickers the [stage] bulb and does so many other things well. She needs to continue down the path she’s been on and it’s my responsibility to give her a car that can win.”

Grubnic honestly has no reason to apologize. Force has qualified well in three of the first four events including a pole in Gainesville. The 2017 Mello Yello champ is also coming off her first final-round appearance of the season last week in Las Vegas, but he won’t be satisfied until they start winning races.

“There is massive potential here, absolutely massive,” Grubnic said. “I haven’t even started to work on anything new. I’m on sort of a self-imposed ban as far as R&D goes, at least until we win a race and get into the top five. It’s all very exciting but I just get a little impatient.”