Not all friendships start so easily. It might be unfair to say Joey Gladstone and Cory Reed became friends so quickly if Gladstone didn’t say so himself. Even so, the Pro Stock Motorcycle riders didn’t become best friends because of a Budweiser.

We don’t need to get into the minutiae of male friendship or why the 2016 Automobile Club of Southern California Road to the Future Award winner and the might-have-been rookie of the year in 2017 (Tanner Gray made sure Gladstone and ... everyone else had no shot) chock up their friendship to nothing in particular. It doesn’t necessarily matter. That they’ve been nearly inseparable for years does.

It didn’t go exactly as planned when Gladstone began running Pro Stock Motorcycle full time in 2017. Chasing something expensive rarely does. Yes, the two-wheel Professional category remains the most economical way to become an NHRA Mello Yello Drag Racing Series champion, but they don’t run on gasoline — they run on Benjamins. Midway through his first full season, he ran out of funding, which meant no more hotel rooms and nights spent on a trailer floor. 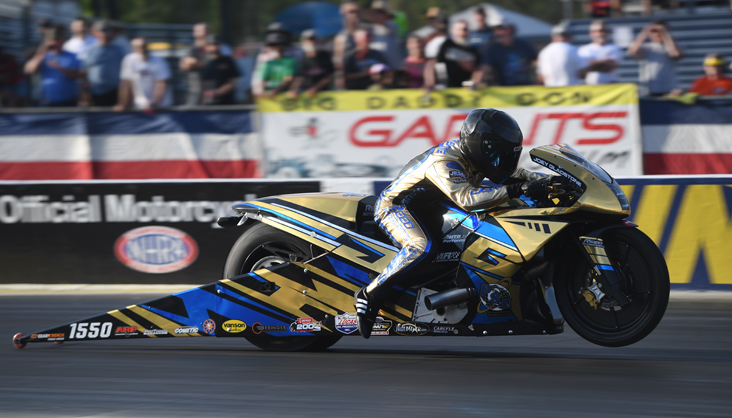 “Cory and I met several years before when I was just getting my start,” said Gladstone. “We didn’t really know each other, but we knew of each other, you know? So, when I came out again to run full time, we kinda said what’s up and hit it off.

“By the time I ran out of funding, Cory and I were just talking, getting a beer, you know? He asked where I was staying that night, and I said that, honestly, I wasn’t sure. Probably the floor of my trailer.”

Reed offered Gladstone a bed in his hotel, and from there, the two became more than friends — they became family. Reed is the son of Top Alcohol racer Annie Whiteley (Jim Whiteley is his step dad, the distinction is more technicality than important), and the family has been an important part of Gladstone’s life.

“They really took me in and made me a part of that family, and that means a lot to me,” said Gladstone, who races alongside his best friend at Reed Motorsports.

The two joined forces late in the 2018 season and live five minutes away from one another in Florida, where Reed is putting together a legitimate race shop. They’re currently racing out of Reed’s garage. Larry Morgan, a name most drag racing fans should be familiar with, is the team’s engine builder. 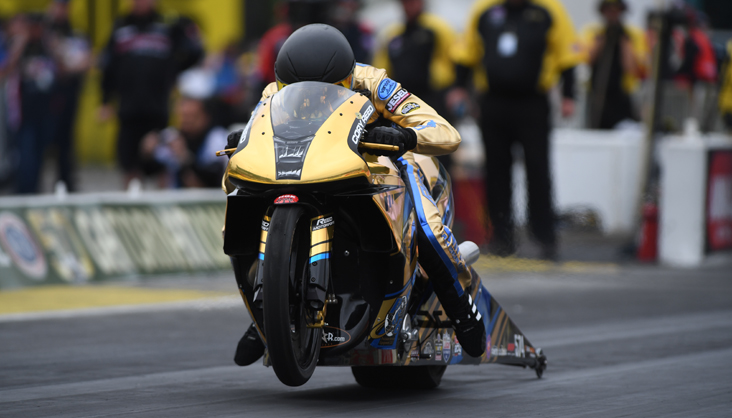 “We went through a lot of growing pains when we first put this team together,” said Reed, referring to Liberty Racing, the previous name of the team that featured Angelle Sampey. “We were breaking so many parts that we couldn’t really work on anything. Larry really helped us stabilize that, and now, I think we’re actually moving in the right direction.”

That’s true for Gladstone, who bopped around from team to team without finding a fit. He posted the fifth-best reaction time average in 2018 but won just three rounds as the entire Stoffer-Underdahl team struggled to get its horsepower to the ground. It wasn’t working anymore.

Both Reed and Gladstone hit their breaking point at the Lucas Oil NHRA Nationals in Brainerd. Gladstone cut a perfect light in the first round and lost in Norwalk and then pulled a two-hundredths advantage in the first round in Brainerd with the same result. Reed ran into even more engine problems and failed to qualify. They both knew something needed to change.

“I was talking to Joey’s dad and told him I was pretty much done,” said Reed. “I was ready to take some time off of racing to do some dyno work and revamp the program. I wasn’t learning anything by going out there and losing every week and hurting parts. He said something similar, and then Joey walked up and said he was pretty much done with what he was doing, too.”

And so, what seemed obvious to everyone else finally came to fruition: The boys partnered up. Gladstone rode Reed’s bike alongside Sampey for the remainder of the season and then became a full-time teammate after that. It just made sense. Gladstone wanted to become a partner on a team, not just a paying member. 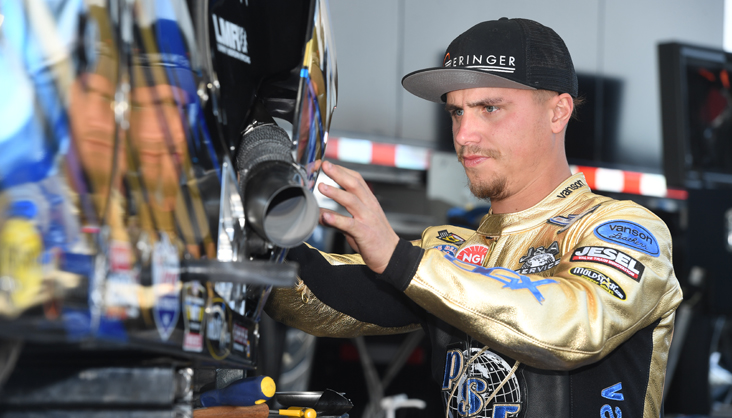 “I think it was important for me to be able to help make calls on a bike,” said Gladstone. “I want to be able to be in the shop and make suggestions and say, ‘Hey, can we do this, can we do that,’ and be a full-time partner like I am with Cory. There’s nothing wrong with the way other teams are doing what they’re doing, but I know for me to be happy … this is really what’s going to work for me.”

That also works for Reed, who values what his friend offers on the back end. It’s one thing to hear chatter from a teammate and another to have a good feel for where they’re coming from and be able to translate that without having to think about it too much. The team is still young by NHRA standards. This is not Vance & Hines — hell, it isn’t Matt Smith Racing. That’s something Reed knows all too well.

“We didn’t come out here in the first year and expect to be successful in terms of wins,” said Reed. “I knew this was going to be a long-term project. But I think right now we’ve got a lot of good stuff, and we’re moving in the right direction. I’m happy with our engine, and I’m happy with our body.”

The youth of the team puts them in an interesting light because it’s easy to damn them with faint praise. It’s obvious how much fun the two have riding motorcycles. It’s obvious how much fun they have being a part of NHRA. That’s something to celebrate, not condemn. But they want to be held to the same high standard as everyone else even as it’s fair to recognize they’re not quite the same.

“I like where we’re at because it’s all on us right now,” said Gladstone. “This is something where we can kind of go and make noise and surprise people. I think we have the ability to do things, and if we do them, it’s because we did them. If we don’t do them, there’s nobody to blame but ourselves.” 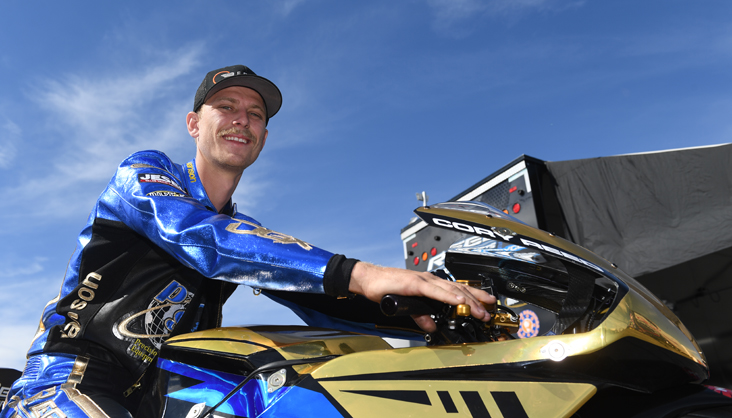 Reed and Gladstone won’t be picked to win championships, or even races, until they prove they can qualify in the top half of the field on a regular basis and that their machines are consistent enough to hang with Matt Smith Racing, or even the Stoffer-Underdahl team Gladstone left to join his buddy.

It’s not that people aren’t taking them seriously, but there’s definitely a level of … well, show us what you’ve got. The two riders are on the flashiest bikes in drag racing, they aren’t getting their hair cut at Great Clips, and Cory Reed’s freshly groomed mustache screams, “I don’t care if you like it.” If they start winning, they’ll be lightning rods.

They probably don’t have a problem with that. They’re out here for a good time and a long time. We wouldn’t have it any other way.