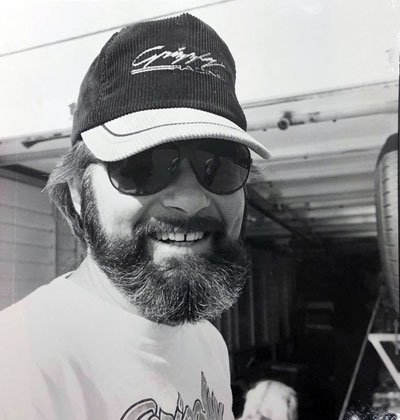 From his Van Nuys, Calif., Carter Pro Paint shop, Carter applied colors as quickly, accurately, and expertly as those who wheeled his rolling works of art down the dragstrip, leaving behind a colorful legacy. His work began on street cars, pinstriping for his pals in high school, and he was as popular and in demand in the custom-car world as he was at the dragstrip. You can find a pretty solid biography of his work, begun under the tutelage of hot-rod master painter Larry Watson, and Carter's many strengths and innovations on this page from the Kustomrama.com web site so I won’t go into that detail here and instead I’ll talk to some of his friends and former customers about some of the cars he painted.

Pulde’s War Eagle Trans Ams of the late 1970s are some of the prettiest Funny Cars to ever prowl the dragstrip, and Pulde remains in awe today of the skills of his longtime friend.

“He just had the knack for color,” Pulde told me earlier this week. “All of those original colors and designs came from Bill Carter. I’d tell him kind of what I was looking for but I left it up to him how he wanted to do it. I’d watch him shoot a base color and the put another color over it and come up with a totally original color. He was just fantastic. He could do it all.” 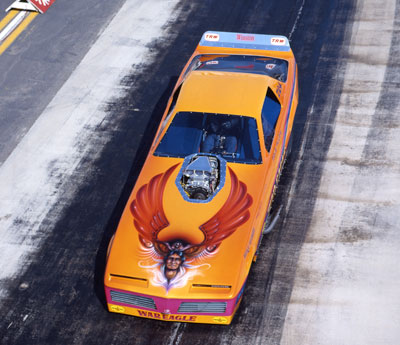 Pulde, a Van Nuys kid himself, had a 50-plus-year friendship with Carter and after the 1994 Northridge earthquake destroyed Carter’s shop, for a while he worked out of Pulde’s shop and they remained close even after Pulde moved to the Midwest. Pulde offering encouragement to his old friend through numerous medical issues and surgeries the last 20 years, and they spoke just before Carter passed.

“I knew him since I was 16,” recalled Pulde. “I didn’t know I was going to be a racer at the time — had no idea what was in my future -- but I liked painting and was into that, so I’d go by and watch Carter and learn how he did things. I had no idea he’d end up painting my race cars. He wanted to be a driver and I wanted to be a painter and it mostly worked out the other way, but it was a fun relationship. Like a lot of people, I had my problems with him -– he could be a  tough sonofabitch to deal with -– but he had a really good heart and was a good friend. He lived life; his nickname ‘Wild Bill’ definitely fit him perfectly.

Fuel-racing veteran Pat Galvin also was one of those San Fernando Valley kids who knew Carter for decades and, like Pulde, went down to watch the master in action and later many of the cars that Galvin tuned on -– including Tom McEwen’s heralded 1978 Indy-winning English Leather Corvette --- were painted by Carter. 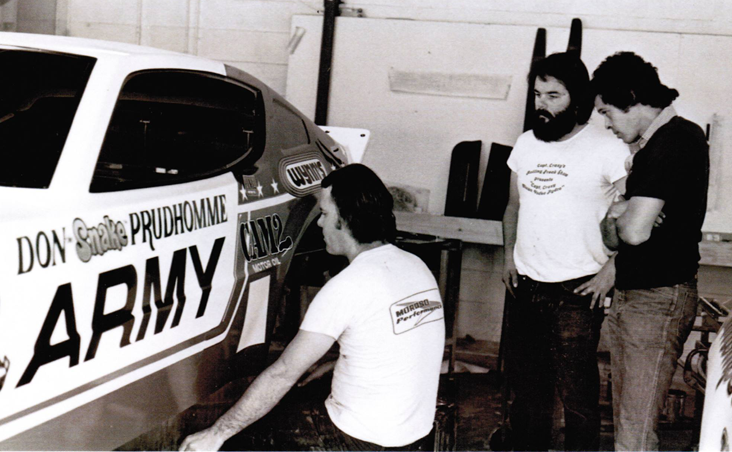 Carter also painted the car for that guy in the other lane -- Prudhomme -- in that 1978 file. Check out this pic above of "Snake" and Carter consulting on the look of his Army Arrow. 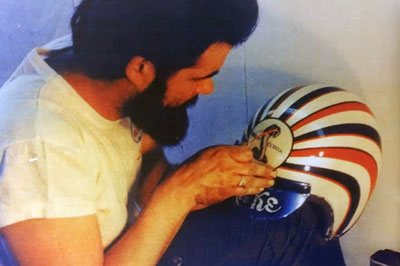 “Bill painted ‘the ‘Goose’s’ first six Corvette Funny Cars –- the two yellow ones, the two silver and black ones, and the first two Coors Light cars,” Galvin recalled. “Bill painted a lot of cars back in that time. [Chassis builders] Jaime Sarte, [Jim] Hume, Steve Plueger would all build these cars at the last minute [before the season] and they’d end up in Bill’s paint shop, like an assembly line where Bill would work 24 hours a day to get them all done in time. Bill would paint the cars and have multiple people lettering, like Walt [Prey], Jim Moser, John Glaspey, [Steve] Stanford; he even brought out Glen [Weisgerber] from the East Coast for a few years. He painted cars, boats, Indycars [Jim Hall’s Pennzoil entry] – you name it, he probably painted it.

“He was just extraordinary with color and design. The colors in that yellow and blue ‘Mongoose’ Corvette were phenomenal. In fact, those same colors ended up being used on the Blue Max the next year [1978]. The colors he put on Dale Pulde’s War Eagle were unbelievable. The first Showtime Monza for Tom Hoover that looked a like a [neon] marquee; that was him, too. He was phenomenal in what he could do.” 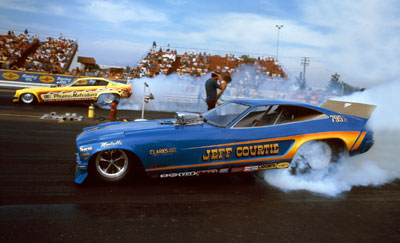 Southern California flopper racer and longtime pal of the Insider was another who trusted his racecars only to Carter. That’s his ’75 Mustang alongside the car of another longtime Carter customer, Joe Pisano.

“Bill painted all of my Funny Car bodies and many other Top Fuel and Funny Cars back in the ‘70s, and in later years he did restorations for Galpin Ford in the San Fernando Valley, painted the Shelby Super Snake restoration Top Fuel car for ‘Snake,’ and the Beebe & Mulligan Top Fueler restoration, among others.

“There is one thing about Bill Carter I do remember,” he added. “I had one of my bodies at Carter’s for a paint job, I had built a steel square-tube dolly for the Funny Car  body, as I had limited space at my mom and dad’s house to work on my car, so I came up with the dolly to move the body out of the way to work on the chassis, motor, etc. It was one-inch-square tube with cheap casters but it worked great for what I needed. Anyhow Bill and I worked out a trade/share deal for the paint jobs as I was low buck, (I paid for the materials, did the color sanding and rubout, and had my sign painter Larry Gloge do the lettering. Until then, Bill like everyone else, used 55-gallon drums to set the Funny Car bodies on to paint them. Bill loved it and soon after ‘Snake’ came in and saw it and wanted one, so Bill called me and I must have built 5-10 of those dollies for Bill, and some of his other customers  (he paid for the material and I supplied the labor). I know after that Bill had three or four dollies there all the time.” 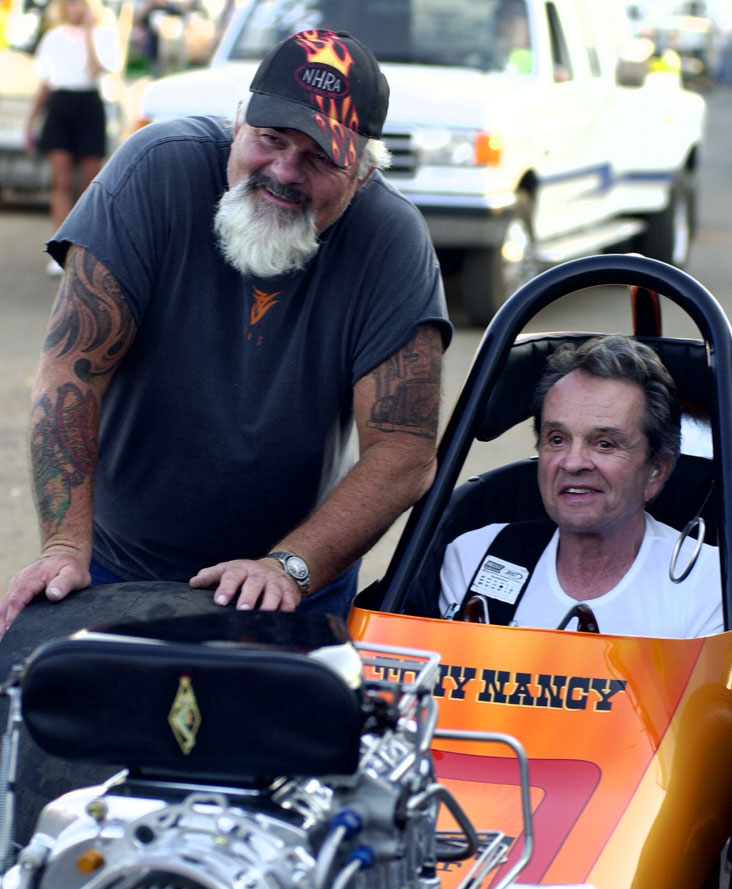 Courtie sent me the photo above showing Carter with another San Fernando Valley legend and Top Fuel racer, Tony Nancy. While Carter was making cars beautiful outside with his airgun, Nancy was making the insides just as classy with his trademark upholstery work. They combined in 2003 to outfit the restoration of one of Nancy's last front-engined "Loner" Top Fuelers.

And while Carter often had the chance to admire his work as it went down the dragstrip, he sometimes sat inside of them as they roared down the quarter-mile. By painting racecars like Ivo’s Videoliner and George “the Stone Age Man” Hutcheson, and made his first runs in Hutcheson’s car in 1968, leading to an off-again, on-again two-decade driving career in Top Fuelers. 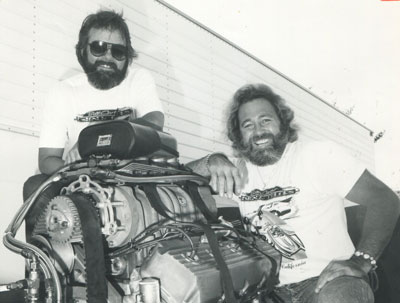 Without a spray gun or brush in his hand, Carter is probably best remembered for the Grizzly Top Fueler he campaigned in the mid-1980s seasons with longtime friend Dan Haggerty, who played the eponymous character in the 1970s television show Grizzly Adams, but Carter knew him well before that. (I read somewhere online that Haggerty, a motorcycle builder and stuntman, had once apprenticed with legendary brush man Von Dutch, so perhaps that led him into Carter’s orbit.)

The Grizzly car, which the duo had purchased from Jeg Coughlin Sr., was, of course, beautiful and ran decently and even won a good-sized Top Fuel show at Orange County Int’l Raceway just before the ’83 U.S. Nationals.

Haggerty’s semi-regular presence with the car brought some attention to the team and Haggerty later even name-dropped drag racing in his 1990 film Repo Jake, playing an ex-drag racer turned repo man. 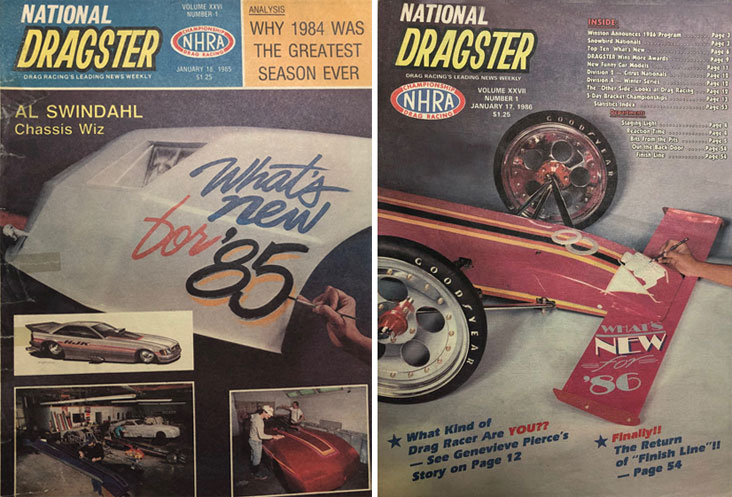 Personally, I’ll never forget how in 1986, Muldowney called on Carter and his lettering buddy Steve Stanford to put the colors to her comeback car after her near-career-ending 1984 crash. I remember it well because our own Leslie Lovett went to Carter’s shop and had him and Sanford create a What’s New logo for our first issue of the year, painted right onto the front wing of her pink digger. He also had helped us the year before by lettering “What’s New” on the front of one of the Funny Cars waiting to be painted in his shop.

This is also a great photo from that era when Carter would invite Lovett over to his shop to look at all of his in-the-work projects. It's 1985, and that's Carter in the foreground (wearing a National Dragster hat!) taping off lines for Gary Ormsby's Top Fueler. The Grizzly dragster is just behind that and then a Dodge Daytona Funny Car body that's been primed and ready to go.

Bill Carter was a friend to many in need, and won’t soon be forgotten for the way he colored our world.