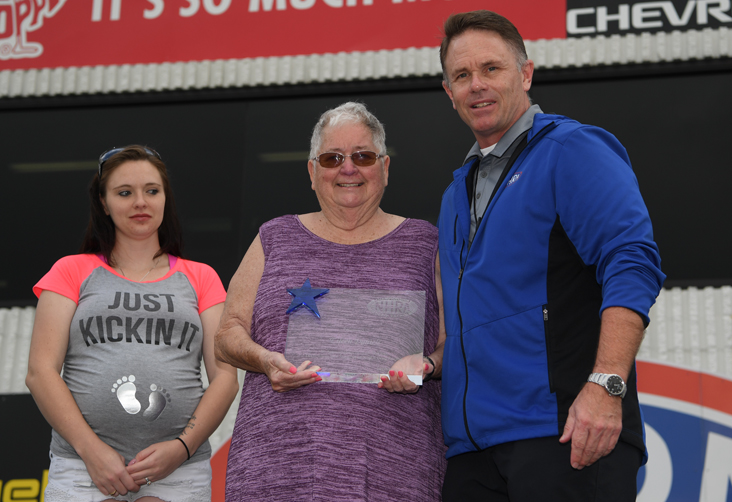 NHRA President Glen Cromwell presented Eileen Daniels with a plaque honoring her years of dedication to NHRA Drag Racing. She was the wife of late Division 3 Director Bob Daniels, and together they later ran the Indy facility for years. (Below) Both of them also are honored with "Thumbprint for Success" markers behind the main grandstand. 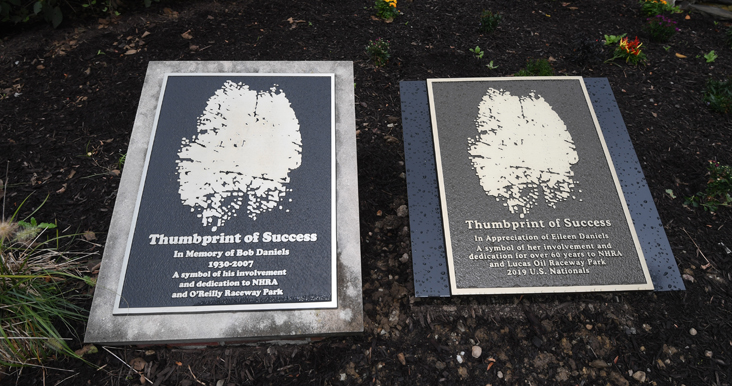 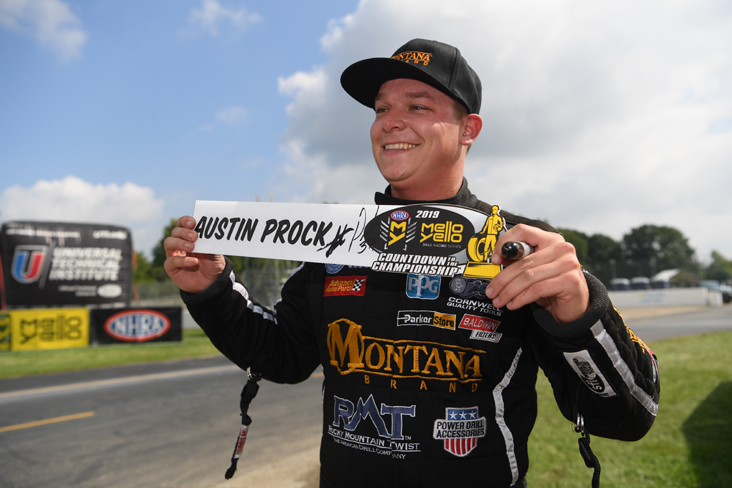 The day was not just about winning the race but also clinching berths in the Countdown to the Championship. Top Fuel rookie and Auto Club Road to the Future award frontrunner Austin Prock earned his spot in qualifying. 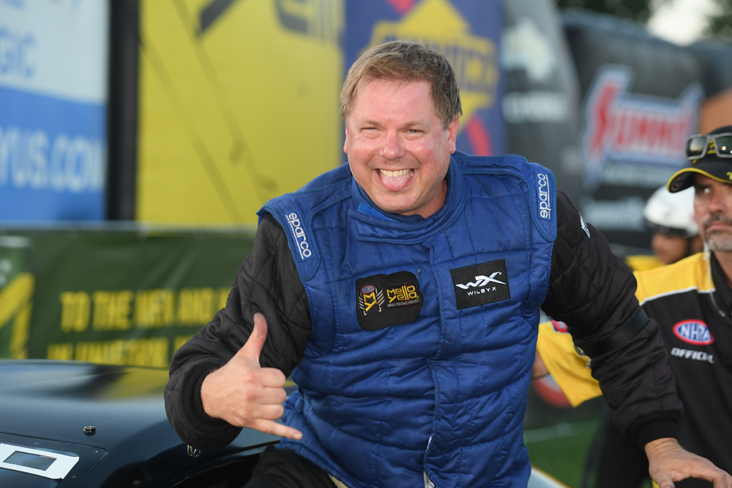 With a stunning first-round upset, Pro Stock racer Val Smeland went from No. 12 to into the Countdown  in the No. 10 spot [story]. The man he bumped to make the Countdown was his teammate, Kenny Delco (below). 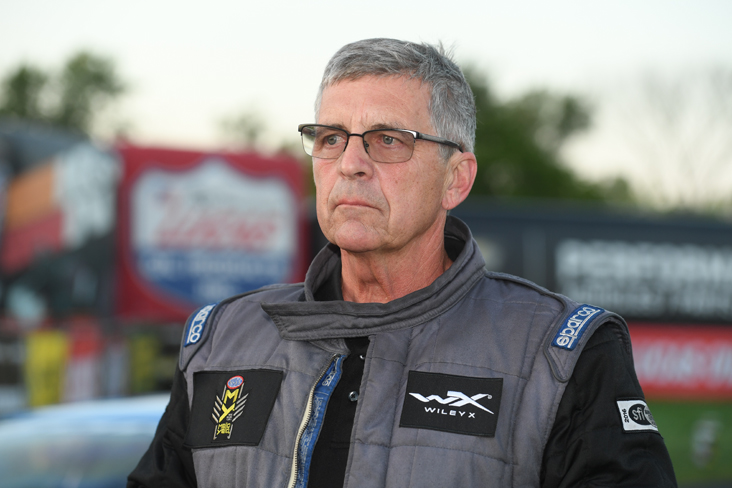 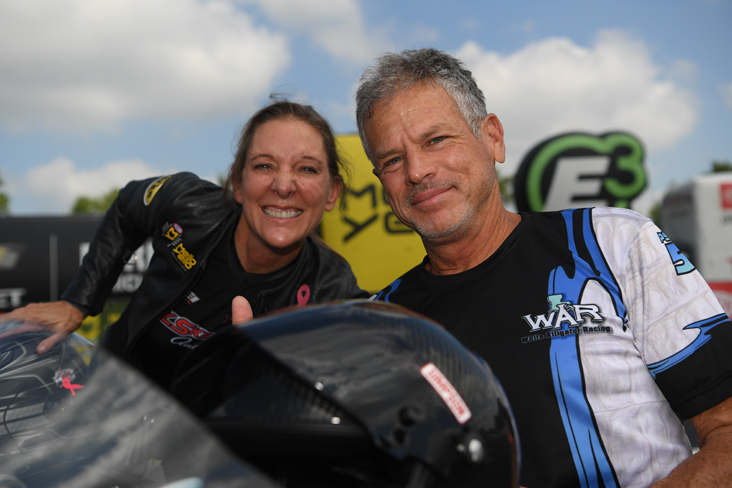 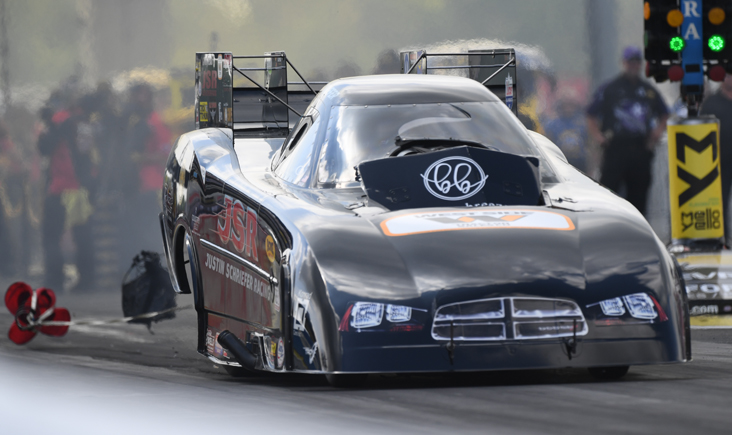 Justin Schriefer, whose 4.005-second effort anchored the quickest Funny Car field in history, backfired the supercharger shortly off the line in round one. 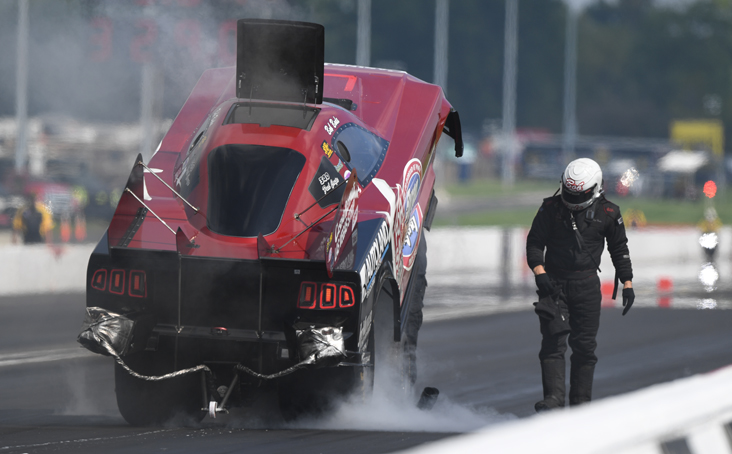 Bob Bode likewise suffered an early backfire in round one of Funny Car and hopped from his car to assess the damage after a brief fire. 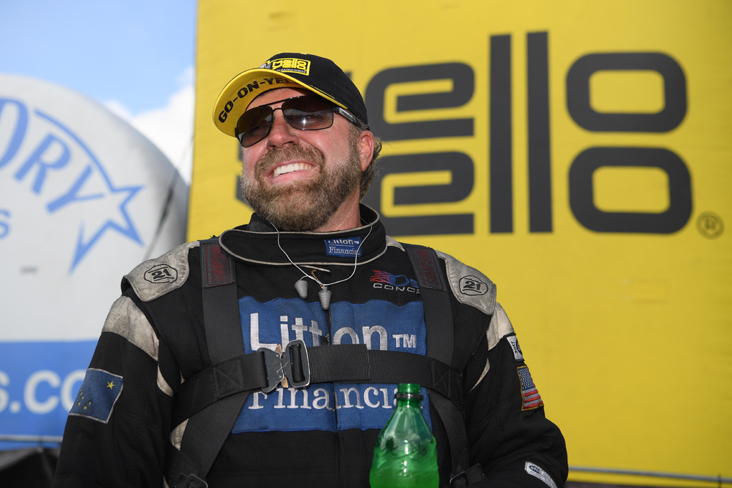 Funny Car rookie Ray Martin was all smiles after collecting his first career round in the class, a victory that came at the expense of ... 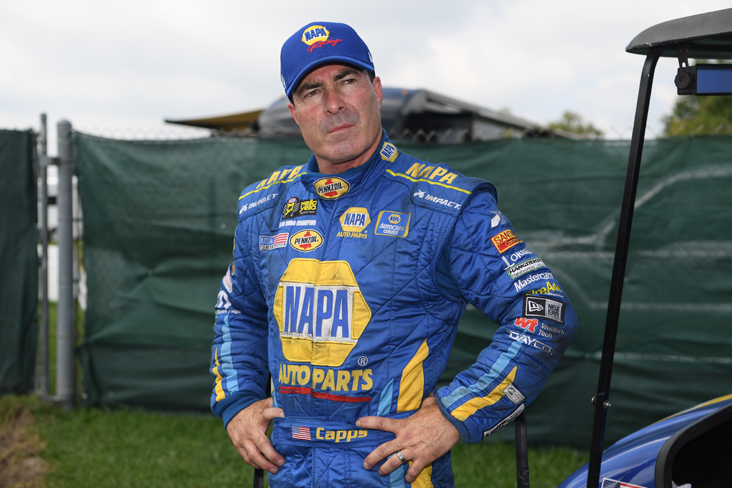 ... Ron Capps, who continues to be haunted by the Indy jinx. Despite having more than 60 career wins, Indy isn't one of them. 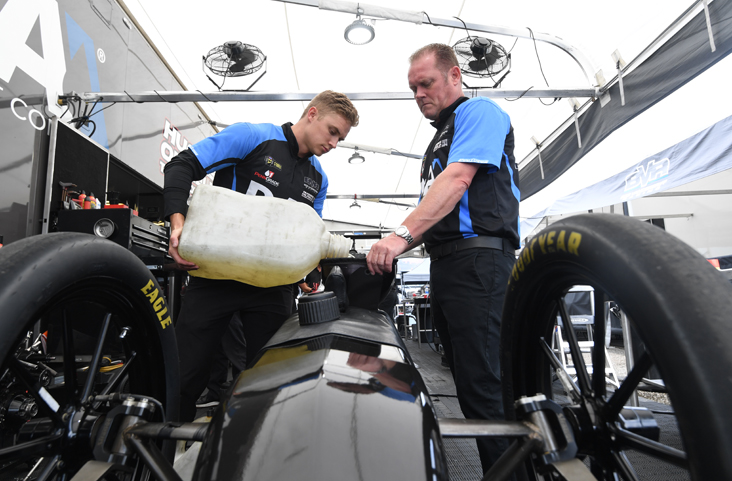 Top Fuel rookie Jordan Vandergriff, left, whose uncle, car owner Bob Vandergriff Jr., was runner-up in Top Fuel at this event in 1995, didn't enjoy the same success, bowing out in round one after a strong qualifying effort. 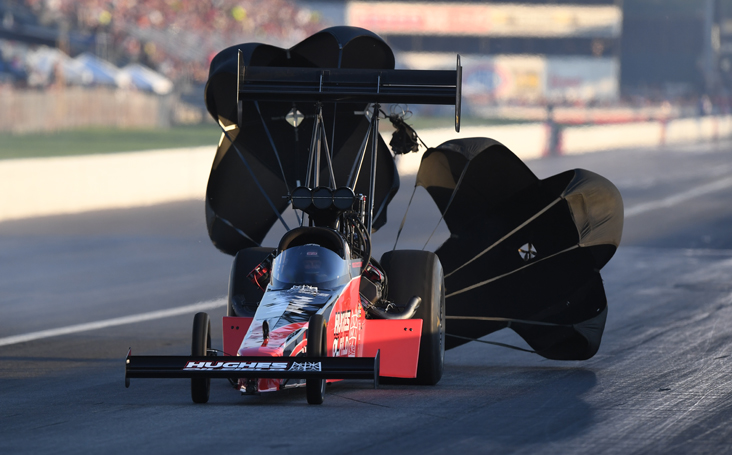 Shawn Reed's great season continued in Top Fuel as he powered the Hughes Oilfield Transportation dragster into the second round. 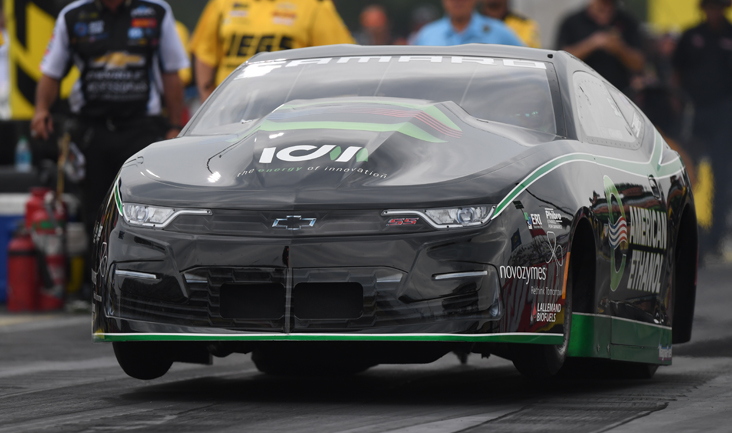 Deric Kramer wheeled his American Ethanol Pro Stock Camaro to wins against Fernando Cuadra Sr., and points leader Bo Butner but his bid for an Indy victory ended in the semifinals against Alex Laughlin. 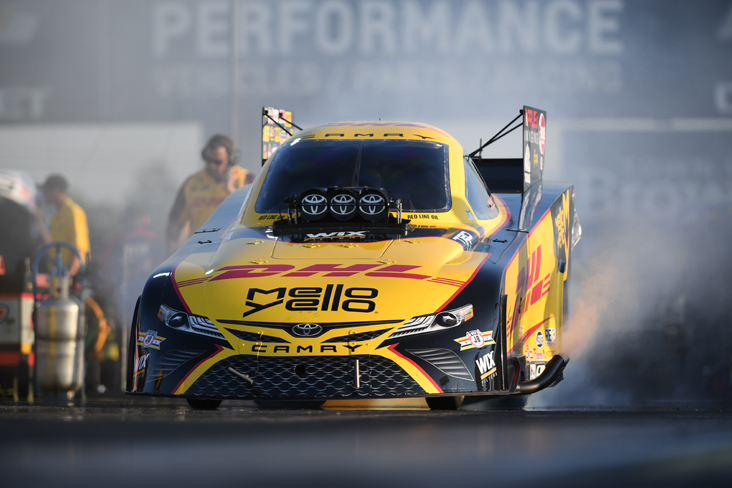 J.R. Todd's Indy win streak came to an end after ten rounds. The 2018-19 Indy winner missed his chance to become the first three-time Funny Car winner when he lost to Jack Beckman in the semifinals. 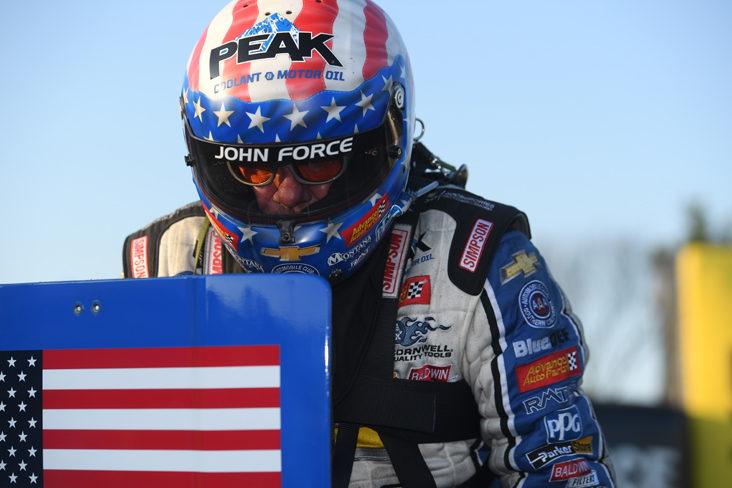 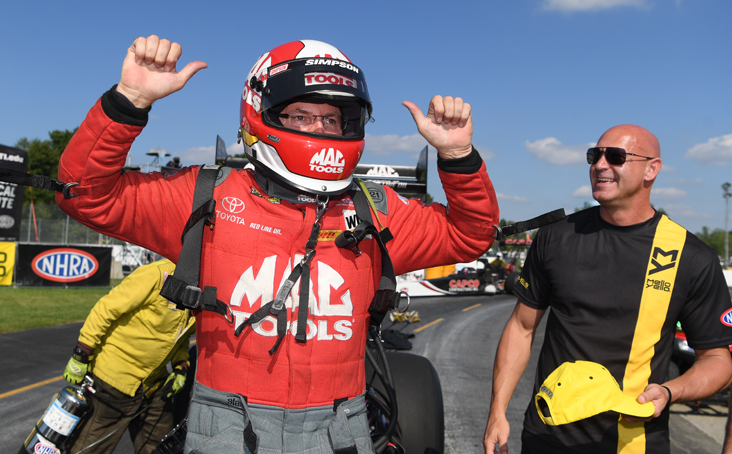 If at first you don't succeed, try 21 more times until you get it right. Doug Kalitta finally broke though for his first Top Fuel win in his 22nd attempt at the Big Go. He drove his Mac Tools dragster to a popular win 25 years after his uncle, Connie, defeated Eddie Hill. 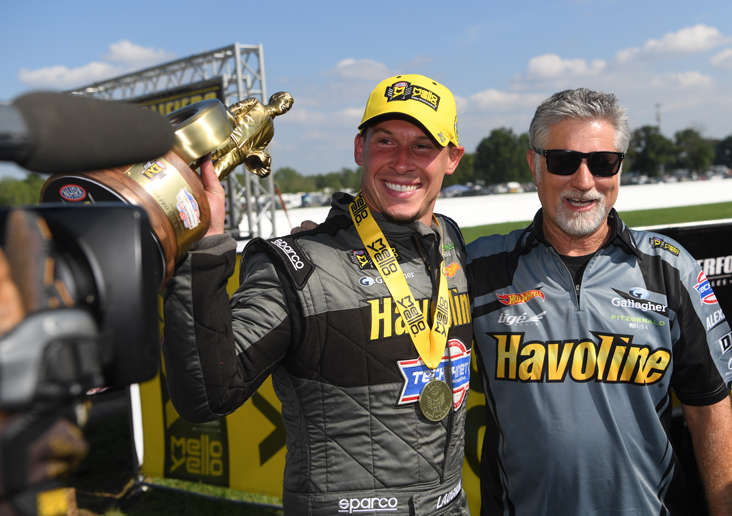 Alex Laughlin picked a great time to win his first Pro Stock race of the 2019 season. After driving his Havoline Camaro to a win over teammate Erica Enders, Laughlin celebrated alongside his father, David. 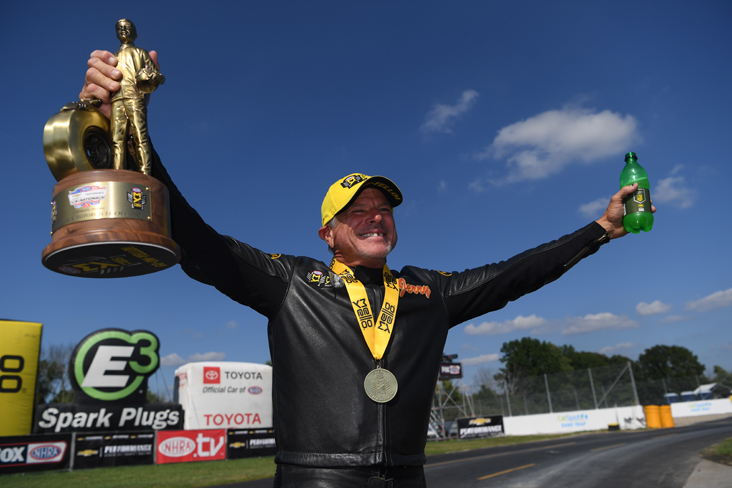 Jerry Savoie was overcome with emotion after winning his second U.S. Nationals title in Pro Stock Motorcycle. Savoie's White Alligator Suzuki was the best bike in the field on Monday. 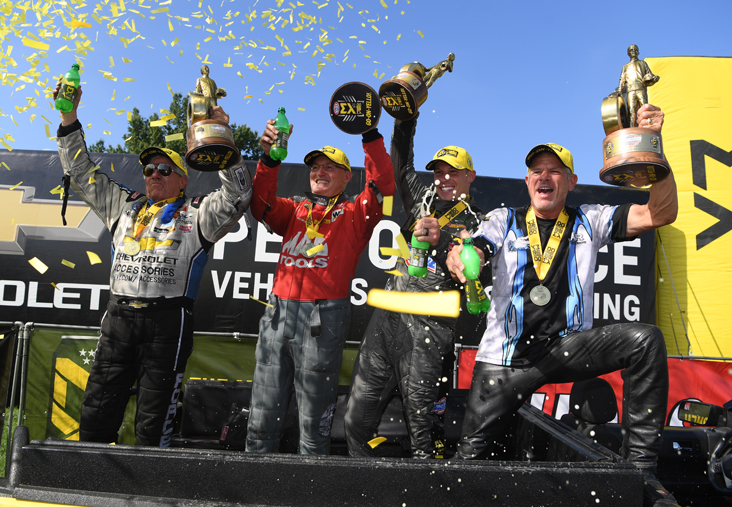 Nothing in drag racing compares to a win at the Chevrolet Performance U.S. Nationals.