Brittany Force and teammate Robert Hight shared the winner's circle for the third time in their careers following a pair of convincing nitro wins at the Mopar Express Lane NHRA SpringNationals in Houston.

Force captured her ninth career win and second-straight in Houston win a dominating performance. It was just her fifth race with new crew chief David Grubnic. Force broke the track record in qualifying with a 3.661, 332.18 pass and then defeated Cameron Ferre, Doug Kalitta and Clay Millican before stopping Antron Brown in the final.

Force was joined in the winner's circle by two-time Funny Car world champion Hight who earned his third win of the 2019 season. Hight beat Jonnie Lindberg, J.R. Todd, and John Force before topping Matt Hagan in the final.

TOP FUEL WINNER BRITTANY FORCE : “All of John Force Racing was on a mission this morning. Dad and I were number one in qualifying and that was the first time a father and daughter were able to do that at an NHRA event. That’s pretty awesome for all of us. We were looking for a win together but to do it with Robert is also pretty awesome.

“All the changes we made this season; it’s a whole new team with David Grubnic, Mac Savage, and the whole Advance Auto Parts team. A whole new crew is a lot to wrap your head around. It was important to make some runs and get into a new routine. We turned the corner in Gainesville, but I screwed up. In Las Vegas we were runner-up. To be able to come out here and run 3.66; that was an outstanding run. It’s just very exciting to get our first win together.”

On her .002 reaction time in the semifinals

“A lot was going through head. I screwed up in semi’s. I got lucky with that .002 light. You’re not supposed to have that in a Top Fuel car. After that run I talked to my dad and talked to Robert and then I talked to David, who said, ‘Let it go. Put it out of your head.’ It’s nice to have a crew chief that will talk to you in the middle of the day like that. With the support system I have around me, I was able to get my head back in the game.”

FUNNY CAR WINNER ROBERT HIGHT: "I wasn’t nervous about qualifying on Friday because I believe in this team. I know they’ll get it done. What I was nervous about was the weather. It didn’t look good. Luckily, mother nature held out for us. We event got two runs and got two bonus points. Our team came out swinging and made really good runs for conditions. That’s why we have three wins so far this year. My crew keeps me in check. We’ve been through a lot of ups and downs. In 2017 at the last race of the year in Pomona we did not qualify until the last session and we were 15th but we found a way to win the championship. I’ve never seen a more focused group of individuals.

“We couldn’t have had a bigger swing in conditions than we had this weekend. The water grains were through the roof on Friday and Saturday. Then, it changed today and we had was dry air and it was ten feet above sea level. If you’d have gone up there with same tune-up it wouldn’t go to half-track without burning up. Our guys have a great handle on conditions. We had a tough road with Jonnie Lindberg, J.R. Todd, and John Force before we had to run Matt Hagan.”

Round 1 recap: Low qualifiers Brittany Force and Steve Torrence advance while Austin Prock wins the first battle against rival Jordan Vandergriff. Force ran a tenth slower than her track record qualifying run with a 3.766, but that was more than enough to win after Cameron Ferre fouled. Torrence powered to a 3.720 to take care of business against Kebin Kinsley's respectable 3.855.

It's hard to call it an upset anytime a three-time champion wins a round but Antron Brown and the Matco team were able to advance from the No. 11 spot and beat last week's Las Vegas winner Mike Salinas on a holeshot, 3.735 to 3.727. Brown lost to Salinas last week in the Four-Wide event.

Scott Palmer also banked his first round win of the season after Billy Torrence's Capco Contractors entry did not get off the starting line cleanly.

Round 2 recap: Coming off back-to-back final rounds in Gainesville and Las Vegas, Clay Millican keeps rolling in Houston. Millican and his Mike Kloeber-led team defeated Scott Palmer to reach the semifinals but they'll have their work cut out for them with a final four match against Brittany Force, who set the pace with a 3.678 in her win against Doug Kalitta.

Steve Torrence and Antron Brown, friends away from the track but serious rivals when the helmets go on, also advanced and will race each other for the 38th time. Brown holds a one-sided 28-9 record in head-to-head match-ups.

Semifinal recap: Antron Brown has earned a spot in his 92nd NHRA final round where he will take on low qualifier Brittany Force. Brown will be racing for the Wally for the first time the the Brainerd round last August after he scored a holeshot win over reigning champ Steve Torrence. It was Brown's 29th win over Torrence in 38 meetings.

Force cut the starting line close with a .002 light in her battle against Clay Millican, but didn't need it after Millican smoked the tires. Force and her Advance Auto Parts team will have lane choice over Brown in the final.

Final recap: It took crew chief David Grubnic just five races to put driver Brittany Force and the Advance Auto Parts team into the winner's circle, and he did it in convincing fashion with a wire-to-wire victory in Houston. After qualifying in the No. 1 spot with a track record 3.661, 332.18, Force won her ninth-career race with a 3.749 to 3.995 win against Antron Brown in the final. Force was also the 2018 Houston winner.

Force reached her 20th career final round by stopping Cameron Ferre, Doug Kalitta, and Clay Millican. The 2017 Mello Yello champion also had low E.T. of eliminations with a 3.678 in her Advance Auto Parts dragster.

Round 1 recap:  No. 1 qualifier John Force re-set low elapsed time of the race with a strong 3.859 as five of the top eight qualifiers advanced in a quick Funny Car round. Force, who qualified in the top spot for the first time in two years, stayed in the hunt for his landmark 150th win with a win against Terry Haddock. Force's teammate, Robert Hight, also found the 3.8s with a 3.895 win over Jonnie Lindberg.

Don Schumacher Racing put two of their four Funny Cars into the quarterfinals with Matt Hagan, and Ron Capps advancing. Tommy Johnson Jr. was on the receiving end of Hagan's 3.946 run while Jack Beckman fell to Bob Tasca, who made his best run of the weekend with a 3.949.

J.R. Todd also carried the momentum from last weekend's Las Vegas win into the first round with a solid win over Jim Campbell. Todd will have his work cut out for him in round two with a tough race against Hight.

Round 2 recap: Bob Tasca III had John Force on the ropes but the 16-time champ slipped the noose when Tasca's parachute deployed before the finish line. Tasca left first and led at half track, but slowed to a 4.060, allowing Force to move to the semi's with a  3.977. The Force team is guaranteed to have a car in the final since John will race Robert Hight in the semi's.

The DSR team is also going to have a Funny Car finalists after Ron Capps and Matt Hagan won their quarterfinal bouts against Shawn Langdon and Blake Alexander respectively.

Hight, the 2009 and 2017 champ, reached the final by beating his boss, John Force in a side-by-side thriller, 3.924 to 3.932. Hight has now beaten Force the last four times they have raced, a feat that no one else has ever been able to achieve.

Hagan's win against his DSR teammate Ron Capps was not as pretty, but he's not about to complain. Both drivers smoked the tires, but Hagan's special edition chrome Pennzoil Dodge was further downtrack and he was able to cruise to a 4.613 for the win. Hagan has already won once this year in Phoenix.

Final recap: Robert Hight claimed the 48th NHRA Wally of his career and third in Houston following a great 3.941 to 3.966 win against Matt Hagan in the final of the Mopar Express Lane NHRA SpringNationals.

Not in the final following Friday's two qualifying runs, Hight rallied to qualify in the No. 5 spot and then made four consistent runs on Sunday between 3.895 and 3.941 to earn his first title of the season. Hight's path to the final round includes wins against Jonnie Lindberg, reigning world champ J.R. Todd, and his teammate, John Force.

Jay Turner ran the table in the Top Fuel Harley class by qualifying No. 1 and then winning Sunday's final round over Mike Scott. Appearing in his 16th final round, Turner was off pace with a 6.792, but that was enough to cover Scott, who had problems of his own and coasted to a 7.027. In qualifying, Turner was impressive with a 6.186, 235.93 run. 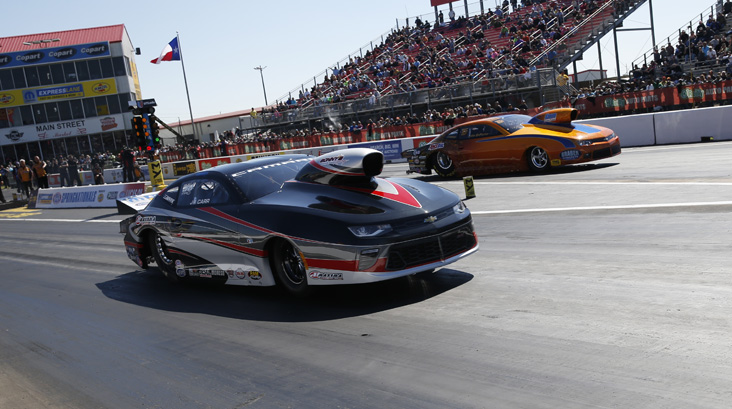 The special exhibition race for Mountain Motor Pro Stock cars was well received with the Houston Fans. In the final round John DeFlorian turned on the win light over J.R. Carr, who fouled. DeFlorian, the winner of the first NHRA MMPS exhibition last year in Indy, shook the tires and slowed to a 10.434, while Carr wasted a 6.243 run. Carr also made the fastest run for a big-inch Pro Stock car with a 227.80 pass in round one. 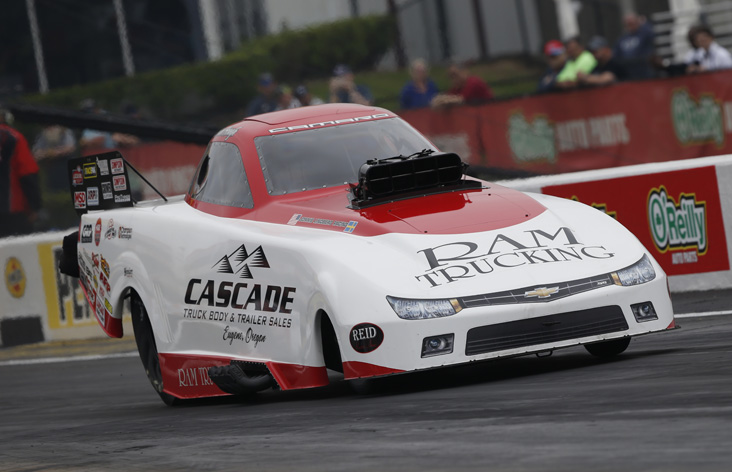