Bob and the boys: A roundtable interview with Bob Vandergriff Racing

Bob Vandergriff Racing will field entries for three Top Fuel drivers this season, with Jordan Vandergriff, Shawn Reed, and Josh Hart taking the controls of the twin BVR dragsters at varying points throughout the season. Bob Vandergriff Jr., himself a national event-winning Top Fuel driver, is the catalyst behind the enterprise, and was joined by his three drivers for a four-way interview on Sunday of the recent Amalie Motor Oil NHRA Gatornationals.

Jordan Vandergriff, his nephew, made his debut at the Magic Dry NHRA Arizona Nationals and reached the semifinals in his debut and added another round win Sunday at the Gatornationals. He’s expected to battle fellow rookie Austin Prock for the Auto Club Road to the Future award given the year’s top rookie. He’s sponsored by D-A Lubricants.

Reed, runner-up at last year’s Gatornationals, joins the BVR team this year after several years in Top Fuel with Paton Racing. Reed, who is sponsored by Hughes Oilfield Transportation, will make his 2019 debut at the upcoming Mopar Express Lane NHRA SpringNationals Presented By Pennzoil in Houston.

Hart, a two-time U.S. Nationals winner in the Alcohol Dragster class with his Advance Auto Parts dragster, made licensing runs in Jordan’s car Monday after the Gatornationals and ran an impressive 3.79. He’s expected to make his debut at the Summit Racing Equipment NHRA Nationals in Norwalk this summer. 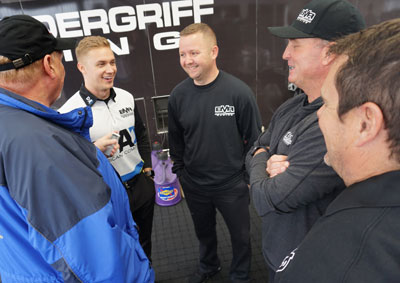 National Dragster: How have you three drivers been supporting one another?

Jordan Vandergriff: Shawn has helped me tremendously. He was a veteran presence for me when I was still green. He’s taken the burden off of my shoulders because I have a lot to do. He’s been great and, obviously, my uncle Bob, is the key in all of this and has given me a lot of good advice. Without him, there would be none of this.

Bob Vandergriff: Good answer, Jordan (laughs). I’ll also speak for Shawn, because he’s been great to have as part of the program. He’s had a great attitude. I know he wants to race and would have loved to be racing this weekend, but he also understands the long-term picture, that we needed to get Jordan up to speed and comfortable and focusing on his program. Now that we have that going well, we’ll begin to work on Shawn. He’ll be the same way with Josh, everyone working together supporting one another.

ND: Shawn, you don’t have all that many years yourself of Top Fuel racing, but suddenly you’re the elder statesman here.

Shawn Reed: Yeah, that’s true, but Bob’s backed up more than I’ve ever driven forward. These guys are the future. I have a few more years myself, but I’m going to do everything I can to help these guys.

ND: What kind of advice have you given Jordan? 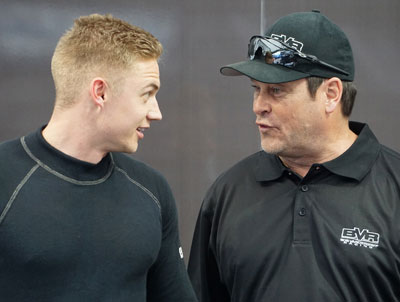 SR: [On Saturday], he had to lift [off the throttle] and I told him that he just has to drive the car how he feels it. Everyone may be coming to him and asking him why he lifted -- why’d you do this? why’d you do that? – but he has to drive the car by his feel. He’s the one driving the car and if you’re not comfortable, lift and live to drive another day. The will to win does not have to be today. They have years and years ahead of them; there’s no sense wrecking a car and risking their life over a win.

BV: I told Jordan that the first run I ever made in Pomona [1994 Winternationals], running against Joe Amato, I made the mistake with the fuel pumps and the car almost shut off on the starting line. I saved it, but it just lets him know that we’re all going to do stupid stuff; that’s just part of the learning curve.

SR: I went down the track once with my face shield up. I didn’t realize that until I got to halftrack.

BV: Yeah, it’s all first experiences. [Through the end of qualifying] Jordan’s only made 16 runs, but he’s doing a fantastic job, and the run is just now starting to slow down for him. Before that, it’s like you’re just a passenger for the first 20 runs. You hit the gas and scream for four seconds. And Josh already has a lot of experience in his own car that I’m sure he’s going to do just fine. He’ll have to get used to the acceleration, but other than that he’ll be just fine.

ND: Josh, your A/Fuel car is very similar to a Top Fuel in that you leave from an idle. How’s your confidence level? 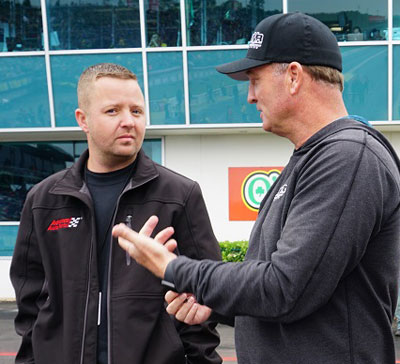 Josh Hart: I’m in my fourth season with the A/Fuel car, so I’m pretty comfortable in it and with the speed. I feel like I could send a text message and drink a cup of coffee on the back half.

BV: It’ll get that way in the Top Fuel car, too. After you’ve been 3.80-something at 315 [mph] it’s going to seem so slowed down that you could probably wave to the crowd. It’s all about getting the laps under your belt.

ND: Between here and Norwalk, will Josh get more chances to test the car?

BV: Definitely. We’ll do it after some upcoming events where the weather is better. He just needs more runs. There’s no substitute for getting in there, going through the procedures, and hitting the gas.

ND: How many races will Josh run?

BV: We’ll let you know on that one, but a minimum of three.

BV: We’ll let you know on that as well.

ND: How races will have two BVR cars in competition?

BV: We’re just finalizing that now, but we’re looking at a minimum of three and maybe as many as seven or eight. Jordan will be running at Norwalk when Josh makes his debut and we’ll have two cars at the end of the year, in Las Vegas, and Pomona, and probably some places in between.

ND: Josh, what are you goals for the season?

BV: He plans of winning them all (elbow nudge to Josh) 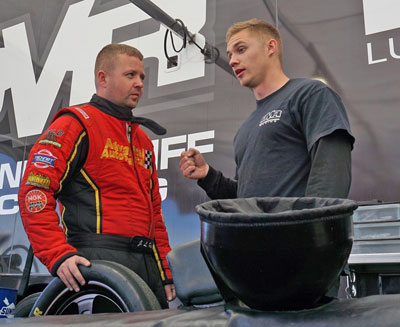 JH: I just want to get comfortable this year and then look towards a full-season ride next year.

ND: Good move. Running only three races will keep your rookie status available for 2020. Obviously, Jordan will be running for rookie of the year this season. It sounds like Austin Prock has committed to running the entire season. Bob, initially you announced an approximate 12-race schedule for Jordan. Has that changed to allow Jordan to better compete for the award?

BV: We’re working hard on it. I have some meetings with some [marketing] agencies and I hope we’ll have the chance to expand his schedule. It just takes money.

SR: I picked the wrong year to have my rookie year. I was against Tanner Gray. I never had a chance.

ND: Alright guys, thanks for the time and good luck to all of you this season.