Billy Torrence, Matt Hagan, and Jeg Coughlin Jr. had the hot hands on a cool weekend in the desert outside of Phoenix and collected victories at the Magic Dry Organic Absorbent NHRA Arizona Nationals.

Torrence, the low qualifier, collected his second career NHRA Top Fuel trophy when final-round opponent Leah Pritchett smoked the tires in the final. Prior to the final, Torrence had defeated Terry Totten, Mike Salinas, and Jordan Vandergriff to get to Pritchett. Torrence’s son, reigning world champ Steve, lost in round one and was his father’s biggest cheerleader throughout the day.

Hagan scored his third Funny Car victory at the event in the last five years, defeating world champ J.R. Todd in the final round for his 30th career win. Hagan, who had never beaten Todd in a final round, reversed that trend when Todd’s DHL Toyota backfired just off the line, triggering the safety system. After earlier victories over Phil Burkhart Jr., Shawn Langdon, and Bob Tasca III, Hagan’s Sandvik Coromant Dodge raced to the title with a 3.890.

Racing in his 1,000th round of Pro Stock competition, Coughlin collected his 62nd Pro Stock Wally and his 81st victory in his long NHRA career on Matt Hartford’s final-round red-light.

Coughlin, who previously won the Magic Dry Organic Absorbent NHRA Arizona Nationals three times – twice in Pro Stock (2000 and 2009) and once in Super Stock (1995) – defeated Greg Anderson, Alex Laughlin, and Erica Enders to reach the final, the 108th of his Pro Stock career.

Top Fuel winner Billy Torrence: “This is just wonderful. It’s a blessing to just be out here, and I’d have loved to have raced Steve in the final, but that didn’t work out. The car ran great, the boys did good. They all worked so hard to keep a good car under me, and Steve’s team even came over and helped them out. It was outstanding.

“Steve was just telling me to keep on doing what I was doing. I asked if there was anything that I needed to be doing different, and he said, ‘Looks like you’re doing a good job; just keep doing that. Just be comfortable. We were looking for a little better run in the final, but it shook pretty good out there.”

Funny Car winner Matt Hagan: “Hats off to Dickie Venables; the guy won the race for us, that’s for sure. He had a racecar underneath me that was going down the racetrack every lap, and that gave me a lot of confidence. My lights were a little off -– I was in the .080s all weekend -– and I got pumped up for the final [.048 light]. I had a car that it didn’t really matter what my lights were.

“This is our first win with the new Hellcat body and Mopar spent so much money in R&D on designing a new body that give sus better performance. It’s nice to get it into the winner’s circle and show them return for the investment. It’s early in the season and it’s great to get the pressure off and put a Wally in the trophy case, but we’ve got a lot more racing to do.”

Pro Stock winner Jeg Coughlin Jr.: “I felt really good behind the wheel today. I had my good buddy Greg Anderson in the first round today and that always feels like a final, and then I raced my three Elite Performance teammates in the next three rounds. Alex Laughlin broke a heim [joint] in his clutch linkage, and then I had the two-time champ in Erica Enders. I know what she’s capable of and we had a good drag race. In the final, I know Matt Hartford, the local hero, was really wanting to win bad for his family, but we came out on top.

“It’s good to win here again, I’ve had a lot of great memories here but none since 2009. We’re looking forward to debuting our new Rick Jones car in Gainesville and it was good to send this one off with another win.”

Top Fuel round 1: Jordan Vandergriff scored his first career round win in his competition debut, defeating former world champ Brittany Force with a career-best pass of 3.692 at 333.41 mph to highlight the opening round of Top Fuel. Vandergriff will have lane choice against Winternationals champ Doug Kalitta in the second round as his pass was the quickest of the round

Fellow nitro rookie Austin Prock, who had a scary moment in Q3 with a stuck throttle, bounced back and collected his second straight first-round win, besting Clay Millican.

After a tough qualifying outing, world champ Steve Torrence was defeated by good pal Antron Brown. On the heels of his loss in the final in Pomona, it’s the first back-to-back round losses for Torrence since last summer (Denver second round/Sonoma first round). Torrence’s father, low qualifier Billy, advanced into round two over Terry Totten.

Last year’s runner-up here, Scott Palmer, flying the colors of event sponsor Magic Dry, was involved in the wildest race of the round as he smoked the tires and crossed the centerline behind Mike Salinas, who had banged the blower downtrack and was coasting to the finish.

Top Fuel round 2: Low qualifier Billy Torrence, whose last No. 1 start ended up with him in the winner’s circle in Brainerd last year, is halfway to repeating that feat after defeating Mike Salinas in round two with a strong-but-fiery 3.687 pass.

Top Fuel semifinals: Leah Pritchett will be gunning for her third Top Fuel win in the last four years at the Magic Dry Organic Absorbent NHRA Arizona Nationals when she takes on low qualifier Billy Torrence in the final round.

Pritchett’s good-looking Mopar SRT/Pennzoil dragster defeated her teammate, three-time world champ Antron Brown, in a side-by-side 3.7-second duel in their half of the semifinals but her 3.721 won’t have lane choice against Torrence.

Torrence powered to a 3.709 to reach his second career final, besting rookie Jordan Vandergriff, whose D-A Lubricants machine went up in smoke as soon as he mashed the gas.

Top Fuel final: Billy Torrence collected his second career NHRA Top Fuel trophy and did it from the No. 1 qualifying spot as he did his first, last year in Brainerd. Torrence got the easy win when Leah Pritchett smoked the tires.

Pritchett, appearing in her 14th career final, was looking for more glory at the place where she scored her first career win in the class in 2016.

Funny Car round 1: Low qualifier Robert Hight showed no signs of relenting in round one, bettering his pole-sitting 3.867 with a 3.862 on a solo pass after opponent Jeff Diehl had engine problems after firing, exacerbating problems that the independent team had during their pre-race pit-area warmup.

Reigning world champ J.R. Todd, who was upset in round one in Pomona, appeared ready to face a similar fate after he lost traction early in his DHL Toyota but expertly gathered it in and chased down Terry Haddock at the stripe for a narrow win.

Tommy Johnson had the round’s unforgettable highlight, as his Make-A-Wish Dodge exploded the blower, shattering the body and losing the left rear tire, but he still got the win light when opponent Jim Campbell was disqualified for clipping the finish line lights.

Funny Car round 2: After dodging a tire-smoking bullet in round one, reigning world champ J.R. Todd is wasting no time making good use of that reprieve, powering the DHL Toyota to a 3.961 to defeat Tommy Johnson Jr., who exploded the supercharger for the second straight round.

Bob Tasca III, who broke a chassis Friday and had to revert to a backup, beat Jack Beckman in a terrific race, 3.95 to 3.96, to advance his new Motorcraft Mustang to the semi’s, where he will take on Matt Hagan, whose Dickie Venables-tuned Sandvik Coromant Dodge raced to its best run of the event, a 3.89.

Funny Car semifinals: Matt Hagan is on pace to continue his every-other-year dominance of Funny Car as the 2015 and 2017 event champ raced into the final round, where he will face world champ J.R. Todd.

Hagan, whose Dickie Venables-tuned Sandvik Coromant Dodge Charger Hellcat was the only Funny Car to make it down a cool track during Friday qualifying, made his third straight three-second pass of eliminations, a 3.921, to beat Bob Tasca III’s 3.983.

Hagan, who was 0-2 lifetime in final rounds against the world champ – both coming last year, in Indy and Las Vegas – easily reversed that trend when Todd’s DHL Toyota backfired just off the line, triggering the safety system. Hagan’s Sandvik Coromant Dodge raced to the title with a 3.890, his fourth straight three-second pass of eliminations and his seventh straight at the event.

Todd, who was appearing in his seventh final round in the last nine events stretching back into 2018, nonetheless gave team owner Connie Kalitta a great outing on the legend’s 81st birthday.

Pro Stock round 1: Jeg Coughlin Jr. won for the 45th time in 100 career matchups with rival Greg Anderson and was impressive with a near-perfect .001 reaction time. Erica Enders also was quick at the Tree defeated higher qualifier Kenny Delco on a holeshot, 6.577 to 6.565.

Alex Laughlin set low e.t. of the first round with a 6.541 to defeat Steve Graham. Pomona low qualifier Rodger Brogdon had the second quickest run of the round, a 6.544, is chasing down Fernando Cuadra’s holeshot-aided effort.

Pro Stock round 2: Hometown favorite Matt Hartford used a holeshot and a narrow .001-second margin of victory against Rodger Brogdon, 6.569 to 6.538, to advance his Sealed Power Camaro to the semifinals, where he will face Deric Kramer.

Kramer, a two-time winner last season, is zeroing in on his first 2019 score after upsetting low qualifier and Winternationals champ Bo Butner. Two-time world champ Erica Enders made her best run of the weekend with a 6.552 to defeat Jason Line and move her Melling Camaro to the semifinals where will face Elite Performance teammate Jeg Coughlin Jr.

Pro Stock semifinals: It’s been 10 years since Jeg Coughlin Jr. won the Magic Dry Organic Absorbent NHRA Arizona Nationals, and the 2009 winner will have to beat hometown favorite Matt Hartford to get back to the winner’s circle.

Coughlin’s yellow and black Camaro powered to a 6.541 in his semifinal race with Elite Performance teammate Erica Enders, whose .018 to .029 holeshot couldn’t hold off Coughlin. The final round will be Coughlin's 1,000th round of Pro Stock racing (646-353).

Hartford, who hails from Scottsdale, Ariz., is in pursuit of his second career Pro Stock victory and one that would really mean a lot to the longtime Grand Canyon State racer. Hartford scored his first career win less than a year ago in Houston, and raced his way back to the final by defeating Deric Kramer on a 6.568 to 6.555 effort.

Hartford, who was racing for his second Pro Stock trophy after breaking through for the first time last year in Houston, wouldn’t have won the race even if he hadn’t fouled as his Sealed Power Camaro went into instant tire shake. 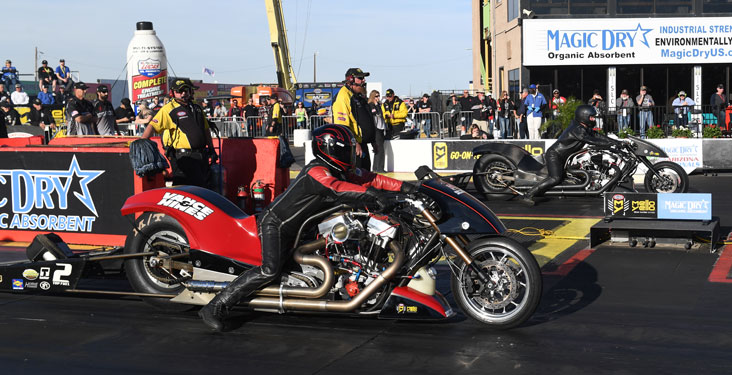