The day-to-day pressures of chasing an NHRA Mello Yello series championship is usually more than enough to induce an upset stomach, cold sweats, and sleepless nights. Pro Stock racer Alex Laughlin suffered through all of those symptoms and then some Friday night in Charlotte.
13 Oct 2019
Kevin McKenna, NHRA National Dragster Senior Editor

The day-to-day pressures of chasing an NHRA Mello Yello series championship is usually more than enough to induce an upset stomach, cold sweats, and sleepless nights. Pro Stock racer Alex Laughlin suffered through all of those symptoms and then some Friday night in Charlotte. The Indy champ insists that being one of the leading contenders for the Pro Stock title has nothing to with his afflictions and he’s got video evidence to support his claim. In perhaps the weekend’s most glaring example of questionable judgement, Laughlin, along with Elite Motorsports crewmembers Chase Freeman, Kelly Murphy and Brian Cunningham, decided to take the “Paqui one chip challenge” and they paid a dear price for it. For those unfamiliar, the “Paqui one chip challenge” involves eating a single tortilla chip that is laced with the notorious Carolina Reaper pepper, known as the hottest chili pepper in the world. 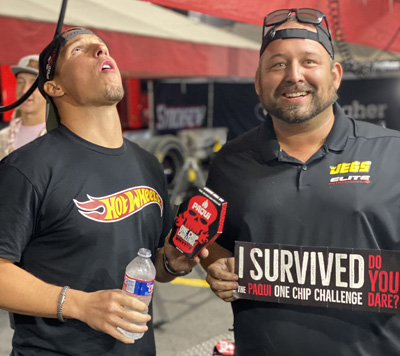 “Never again. Never. Ever. Ever,” said Laughlin, recalling the horrors of the evening two days later. “It was definitely not the smartest thing I’ve ever done. One of our guys showed me a You Tube video and it looked like it wasn’t going to be too bad. I like spicy food and it’s usually never a problem. I’ve been to those places with hot wings where you have to sign a waiver before you eat them and that’s never been a problem but this? This is on a whole different level. I thought it might last ten minutes. Fourteen hours later, I was still in bad shape. I woke up at 3 a.m. and Googled “internal bleeding”. I seriously thought I was going to die. We all did.”

So Alex, did it occur to you that this stunt might not be a wise idea, especially during a Countdown event?

“Well, I really didn’t think it would be that bad,” he shrugged. “I mean, it’s just one tortilla chip. Like I said, I can usually eat stuff that other people won’t eat, but I had no idea what I was in for. I’ve done some dumb things, but this is right up there.”

Fortunately for Laughlin, he was able to make both of Saturday’s qualifying runs in both Pro Stock and Pro Mod. He missed the Pro Mod field despite a 5.86 best, but he’s in the thick of the Pro Stock battle with a 6.547 that is good for the No. 5 starting spot. Laughlin came into Charlotte as the No. 5 driver in the standings, and he needs to make up 83 points on leader Jason Line. That’s a tough task, but it’s not impossible and coming off his big win last month in Indy, Laughlin’s Havoline Camaro is as good as it’s been all year.

“I made two good runs with the Pro Stock car on Friday and we didn’t know it at the time, but we burned up a rear gear,” said Laughlin. “It gets tight and it kills our speed when that happens. Once we fixed it we went low for the session and picked up three bonus points. I wish we’d have found it sooner. We might have been able to run with [low qualifier] Erica.”

Depending on his results in Charlotte, Laughlin is in for another adventure next weekend when the Mello Yello tour heads for Dallas for the annual stop at the Texas Motorplex. Laughlin is planning on skipping both of Saturday’s qualifying runs in order to race his drag radial Corvette at the No Mercy event at South Georgia Motorsport Park. He’s currently looking for a private plane to shuttle him from Texas to Georgia and back so he doesn’t miss Sunday’s final elimination rounds. Earlier this year, Laughlin won a $50,000 prize in the Lights Out event in Georgia and is eager to go back for more.

“I’ve got a pair of commercial flights booked but It would be better to find someone with a small plane,” said Laughlin. “As long as we make a good run on Friday, I feel like I can afford to miss both of Saturday’s run and it won’t hurt me too much. If something changes, I’ll put Frankie [Taylor, drag radial crew chief] in the car and let him drive and I’ll stay in Dallas. I just feel like the Drag Radial stuff is good for my brand and I want to do it all. Besides, after what I just did with that chip challenge, it wouldn’t be the dumbest thing I did this week.”