After first Funny Car win, Shawn Langdon has his confidence back heading to Virginia

Shawn Langdon's much-anticipated victory at Charlotte came in his 30th career start in Funny Car, providing the type of spark only a win can provide and the team is now ready to take advantage of the next opportunity to celebrate in the winner’s circle.
15 May 2019
Posted by NHRA.com staff
Feature

Shawn Langdon has a championship resumé, strong backing from a championship team in Kalitta Motorsports and a talented crew working with him. But when the former Top Fuel world champion was still searching for his first career Funny Car victory, the team needed a jolt only a NHRA Mello Yello Drag Racing Series win could provide.

That much-anticipated victory at Charlotte came in Langdon’s 30th career start in Funny Car, providing the type of spark only a win can provide. With that added confidence, Langdon is now ready to take advantage of the next opportunity to celebrate in the winner’s circle in his 11,000-horsepower Global Electronic Technology Toyota Camry, and the 15-time event winner will get that chance at this weekend’s second annual Virginia NHRA Nationals at Virginia Motorsports Park.

“It gives everybody involved with the team a little bit of a boost,” Langdon said. “Winning is a cure-all. We had a lot of learning curves last year and, this year, it seemed like we were right there. We would look at all the information and we knew we were close. We knew we had a car and a team capable of getting a win, but when it doesn’t happen, it reaches a certain point where you’ve got to do something. Everything just kind of fell into place at Charlotte and it was pretty exciting.”

Steve Torrence (Top Fuel), Courtney Force (Funny Car), Tanner Gray (Pro Stock) and LE Tonglet (Pro Stock Motorcycle) are the defending winners of a race that will be televised on Fox Sports 1 (FS1) in 2019, including final eliminations coverage starting at 5 p.m. on Sunday, May 19. It is the eighth of 24 races during the 2019 NHRA season and Langdon and his team, led by crew chiefs Nick Boninfante and Del Worsham, appear to be hitting their stride in the class. 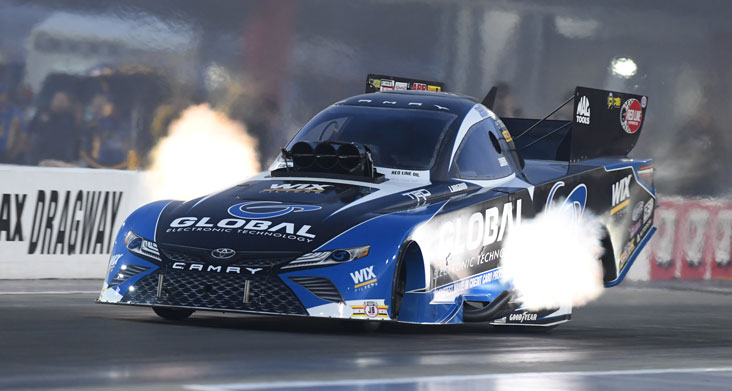 Langdon, who won the 2013 Top Fuel world title, likes where he sits heading into Virginia, in part because of the environment this weekend should provide. He was a major fan of NHRA’s return to the first-rate facility, noting the top-notch racing surface and a rabid fanbase that came out in force a year ago. Langdon, who is ninth in points, expects much of the same this weekend, which has him motivated to continue his strong performances.

“It’s one of the parts of the country where you walk in the gates and the fans are so appreciative you showed up,” Langdon said. “The fans are constantly telling you ’Thank you,’ and that goes a long way. Everybody is having so much fun and it just reminds you this is what I love to do. The racing surface is arguably the smoothest on tour and they’ve done a great job with that facility. I’m glad it’s back on the schedule and it’s definitely a race I’m looking forward to.”

Of course, Langdon also feels that way thanks to the triumph in Charlotte. But he believes the team had been building to it for quite a while, and he also knows the journey is nowhere near complete in a loaded Funny Car class. He sits just inside the top 10, something Langdon hopes to change over the course of the next several weeks, but he’ll have to top the likes of points leader Robert Hight, teammate and defending world champ J.R. Todd and Atlanta winner Ron Capps to do it. Still, Langdon goes back to the rediscovered confidence he has found and believes it will pay off.

“I’ve always liked the progression of the team,” Langdon said. “It’s always been a team with a lot of talent and I like that. You could see in the future that it was going to be good, you just have to come together as a team. After that win, you see a little pep in everyone’s step. It was kind of like, ‘We got that out of our way, now let’s go get our second.’ It would be awesome to win (in Virginia).”