There was a lot of news involving the Pro Stock Motorcycle class this winter, but few announcements carried the weight of the bombshell dropped by the Vance & Hines team in early January when they announced the addition of Angelle Sampey to their roster.

Granted, the announcement clearly stated Sampey was on a four-race trial, but it’s not difficult to imagine if she enjoys even a hint of success in those four events (which includes both four-wide races), she won’t be added to the roster for all 16 races.

Assuming that’s the case, does Sampey still have enough left in the tank for one more championship run? Can she add to her total of 42 national event wins? And, how does her presence affect current Harley riders Andrew Hines and Eddie Krawiec? Those are some of the more intriguing questions being asked in the Pro Stock Motorcycle class, and that’s just one team. 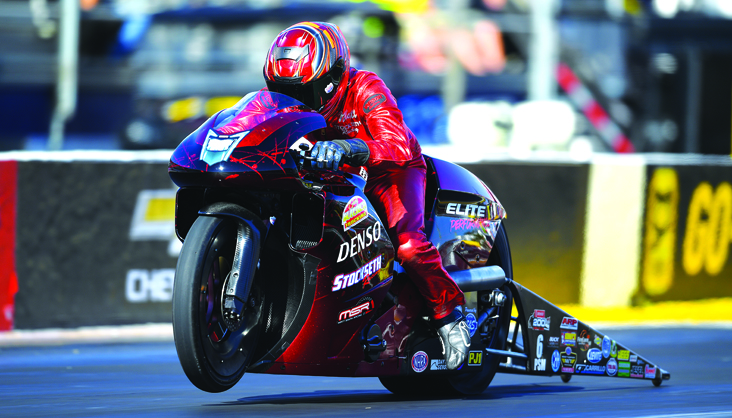 Can Matt Smith repeat?
Had it not been for the Sampey to Harley announcement, all of the talk in the Pro Stock Motorcycle class this winter would be centered around reigning NHRA Mello Yello Drag Racing Series champion Matt Smith and his dominating performance last fall. Smith had the field covered in Pomona, something that rarely happens in any Professional class these days. Based on that, it’s hard to imagine he won’t be the favorite again this year.

Smith’s roller coaster ride of a 2018 season included a failed partnership that cost him a qualifying spot in Gainesville and the lack of a major sponsor. He still managed to win four events plus the Mickey Thompson Tires Pro Bike Battle, and he joined the Denso 200-mph Club in Pomona with a 201.22 run, the fastest speed recorded in the class to date.

Smith figures to face none of the same distractions this year, and he’s also going to be more familiar with the EBR body that he debuted in Brainerd. Smith filled in the sponsorship end of the puzzle in early February when he joined wife, Angie, as a member of the Denso Spark Plugs team.

As part of his relationship with the Elite team, Smith has tentative plans to race in the Pro Stock class this season, although the only events that offer Pro Stock that do not conflict with bike races are Seattle and Brainerd. Contending for what could be a fourth championship, Smith might ultimately find himself too busy to engage in a distraction. 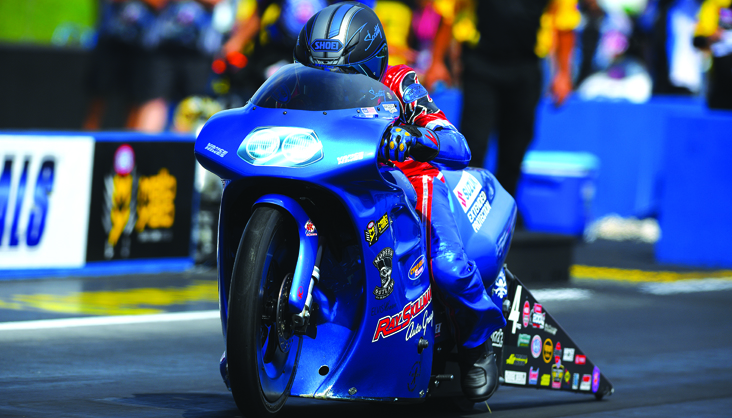 What’s new?
The game of musical chairs in the Pro Stock Motorcycle class involved more than just Sampey. Scotty Pollacheck, who struggled last season aboard a Suzuki with the Stoffer/Underdahl team, will race with Matt and Angie Smith on a third EBR-bodied V-twin. Pollacheck previously rode for MSR in 2015.

In another surprising move, Karen Stoffer has joined Jerry Savoie’s White Alligator Racing team. Stoffer’s seat at WAR opened up when 2010 champ LE Tonglet made the decision to take a break from full-time competition to spend more time with his family. Tonglet, a four-time winner in 2018, plans to run a handful of races on his family-owned Suzuki. WAR team owner Savoie has also announced his intention to race a part-time schedule, but he wants his Tim Kulungian-led team to be at every race, hence the decision to add Stoffer, who does plan to attend all 16 events. 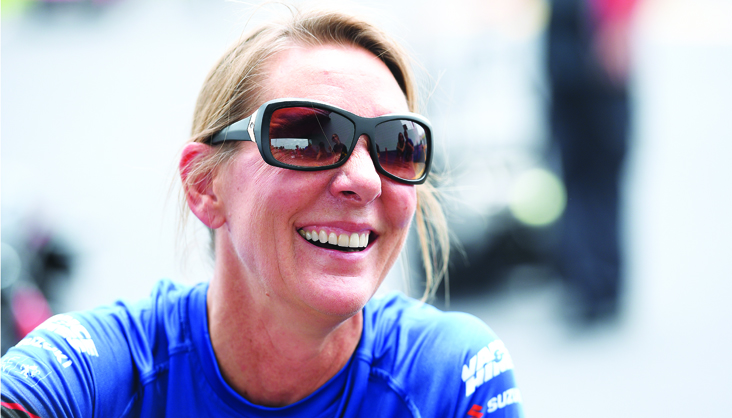 For the first time in her career, Stoffer will be riding a bike tuned by someone other than her husband, Gary. One half of the Stoffer/Underdahl team, Gary, and partner Greg Underdahl will remain busy with a two-bike Suzuki effort that includes Jimmy Underdahl and rookie of the year contender Jianna Salinas, the daughter of Top Fuel racer Mike Salinas. Salinas worked hard throughout the 2018 season preparing for her debut aboard the test bike owned by Underdahl and Stoffer. She made steady progress and recently earned her NHRA competition license.

Coming off her first full season, Kelly Clontz also got some good news over the winter after landing a new marketing partnership with Seamfitters 602 Union in her home state of Maryland. No class in drag racing has had as many successful female racers as Pro Stock Motorcycle, and that figures to continue with the emergence of Clontz and Salinas. The season-opener in Gainesville could feature as many as eight women riders; Sampey, Stoffer, Clontz, Salinas, Angie Smith, Katie Sullivan, Melissa Surber, and Andie Rawlings.

And the next Wally goes to?
The list of riders who are in contention to be NHRA’s next first-time Pro winner is long and impressive, and it starts with Joey Gladstone and Pollacheck. Both riders are considered by their peers to be among the most talented in the class, but neither has had the power to contend for victories at recent events. Both riders figure to be on vastly improved bikes this season with Pollacheck racing alongside Matt Smith and Gladstone racing a full season as a teammate to Cory Reed.

If not Gladstone or Pollacheck, how about Mark Paquette, Clontz, Ryan Oehler, Underdahl, Reed, or even Ron “the Rat” Tornow as the class’ next first-time winner? Underdahl has been to two final rounds in his career, and Reed has appeared in one. The rest are seeking their first final-round appearance, but given the unpredictable nature of the class, it’s not a stretch to imagine a couple of fresh faces in the winner’s circle this season.