2019 Funny Car Preview: The road to the title has different routes

A crowded Funny Car category offers plenty of contenders for the 2019 world championship -- and a variety of ways to take the crown.
30 Jan 2019
Phil Burgess, NHRA National Dragster Editor
Feature

Eight drivers collected national event wins in Funny Car in 2018, and it took a late-season surge in the Countdown to the Championship to allow J.R. Todd, competing in just his second season in the class, to take home the championship with the DHL Toyota after a dramatic conclusion at the season-ending Auto Club NHRA Finals in Pomona.

It was almost a tale of three seasons, with Courtney Force earning the top seed in the Countdown to the Championship playoffs thanks to four wins in the first 10 events of the regular season before she tailed off and the Don Schumacher Racing trio of Matt Hagan, Ron Capps, and Jack Beckman dominated the summer. Although Todd struck early, with back-to-back wins at the inaugural four-wide event in Las Vegas and then two weeks later in Houston in April, he didn’t spend a day in first place until he won the playoffs opener in Reading, then proceeded to have a solid six-race Countdown effort and fended off reigning champ Robert Hight, who also found his mojo in the final quarter of the season.

CAN TODD REPEAT AS CHAMPION?

Most certainly, yes. Crew chiefs Jon Oberhofer and Todd Smith clicked into the right combination at the right time, just before the regular-season finale in Indy then continued to refine that tune-up throughout the playoffs. While a lot of glory and attention rightfully went to Top Fuel champion Steve Torrence for sweeping all six events of the Countdown, were it not for that, Todd and team would have been the talk of the Countdown.

The “Yella Fellas” didn’t win all six of the Countdown events like Torrence did but they were in the final round at five of them — and won three times — and collected 20 of a possible 24 round-wins and only got outrun in the final once, against Hight in Dallas. They made 21 three-second runs in the 23 playoff rounds they contested, showing that the consistency was certainly there (72 percent run completion), which in this track-prep era certainly means as much if not more than setting low e.t. In fact, the team only had one No. 1 qualifier through the 24-race season — at Indy, where he became one of a short list of Funny Car racers to win the Big Go back to back — yet still scored six wins.

Todd now not only has two full seasons in the class under his safety belts, but two very successful campaigns. He won twice in his rookie year in the class in 2017 and finished ninth in points, then tripled that score last season en route to the championship. He looks comfortable in the car — his .067 reaction-time average was second in the class, just milliseconds behind Cruz Pedregon — his team is solid and motivated, and the performance profile of a champion is certainly there. 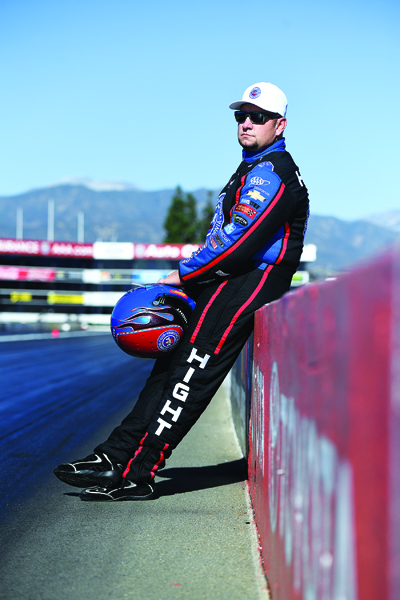 IF NOT TODD, THEN WHO?

With a championship in 2017 and a second-place finish last season, Hight certainly will always be a threat to win the championship. His Jimmy Prock-tuned Auto Club Camaro was on average several hundredths quicker than the rest of the field but sometimes at the cost of consistency. Speed and horsepower will win you more races than it will cost you but the Auto Club team’s 66 percent run-completion average was not even in the class’ top five, which would seem to be a cause for concern. As was the case in 2017, they were slow starters, not tasting victory until the ninth event of the season, in Chicago, but that always seems to play in Prock’s game plan. As a driver, Hight is unflappable. His comeback last season after breaking his collarbone in a victorious final round in St. Louis to win again two weeks later in Dallas speaks volumes about his game, and the fact that he was third best on the Tree behind Pedregon and Todd completes the package.

As with Hight, no championship conversation is ever complete without including Capps, the 2016 titlist and one of the class’ all-time win leaders (60 victories). Like Hight, Capps and crew chief Rahn Tobler had, by their standards, a slow start. A year after winning four straight beginning in Houston, the NAPA Dodge Charger didn’t reach its first final until a runner-up to Hight in Chicago, which came two races after Tobler made the call to switch back to the five-disc clutch. Two races after Chicago, they got their first win in Bristol, and the slow start had them entering the Countdown as the No. 4 seed. A higher seed might have won them the championship. 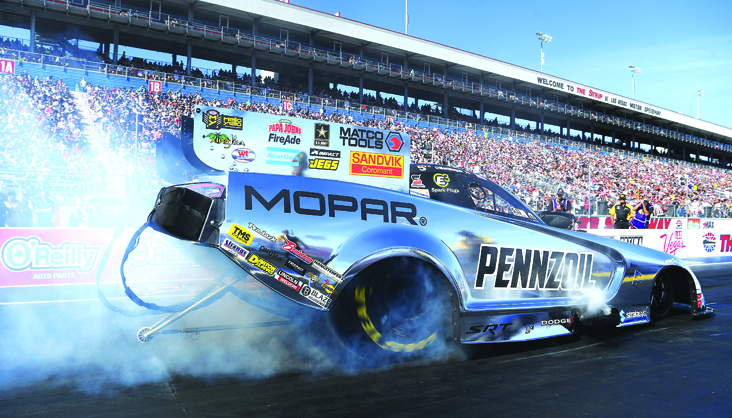 Capps’ teammates, Hagan and Beckman, also are both former world champions with title pedigrees. On the strength of a season-opening win in Pomona and a runner-up in Gainesville, Hagan actually led the points through the first three races of 2018 but didn’t win again until the summer. He and crew chief Dickie Venables debuted an all-new Dodge Charger body a few races later in Denver and seemed to struggle to find the recipe to meld their combination with the new shell’s desires. In the 11 races that followed, they went to two finals and seemed to have it sorted out by year’s end. Beckman had two wins, in Gainesville and Brainerd, and finished a disappointing seventh after a trio of three straight top-five finishes.

Interestingly, it was the fourth DSR flopper, the Make-A-Wish Charger of Tommy Johnson Jr. and crew chief John Collins that may have been the best car down the stretch after they, too, went back to a five-disc clutch. They never reached a winner’s circle — they had three runner-ups — but the fact that they finished ahead of Capps, Beckman, and Hagan should speak volumes. Johnson, who got married in the offseason, is the only one of the DSR flopper drivers without a championship — he has a second-place finish and a pair of third-place finishes — but he’s certainly in a position to contend again, and now that he’s a newly minted groom, it’s time to shed that bridesmaid role. 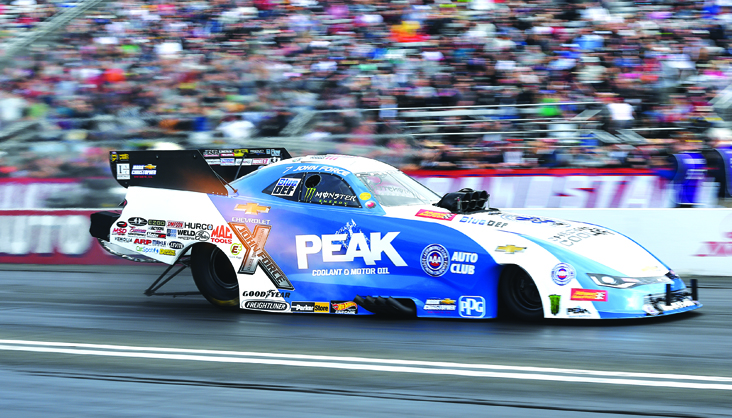 BUT WHAT ABOUT COURTNEY? AND JOHN?

The driver of the Advance Auto Parts Chevy is conspicuous by her absence in the list of challengers, but not near as conspicuous as she’ll be on the sidelines this season. The talented second-generation driver has announced that she will not be competing this season. While she’ll continue to have a presence in the NHRA world, it won’t be behind the wheel of a Funny Car in the near future.

Her famous father, 16-time champ John Force, could be a big beneficiary — at least on the track — of Courtney’s decision as he will inherit the talents of tuner Brian Corradi, whose influence was obvious in Courtney’s 2018 campaign. Despite coming from a predominantly Top Fuel background, Corradi found the magic to tune Courtney to 11 No. 1 qualifying berths in the season’s first 15 events, but, like Hagan, they hit a wall after Richmond, their fourth win in the first 10 events, and didn’t win again in the remaining 14 events and only reached one more final.

The senior Force, the first driver to crack the 100-win mark, is on the verge of becoming the first to also reach 150, and just needs one win this season to get there, which seems almost a forgone conclusion. What the absence of a third team Funny Car will mean to the Force camp is yet to be seen, but there could be pro and con arguments for both.

WHAT ELSE IS NEW?

Bob Tasca III’s second full season back on the tour will benefit with the addition of former Top Fuel world champ crew chief Mike Green, who will be working with incumbent crew chief Eric Lane on the Motorcraft Mustang, which will wear a new-design body that should debut in Pomona with improved aerodynamics. Tasca had a decent car last year — reaching one final (a runner-up to Capps in Bristol) and three semifinals — but disappointingly missed the Countdown by one spot.

Pedregon, who like Tasca missed the playoffs last year, not only will tune his own Snap-on entry this year — following the winter dismissal of Tommy DeLago — with assistance from Glen Huszar. The bigger news for “the Cruzer” is a switch from the Toyota Camry body to the new Dodge Charger shell. For more on his decisions, turn to page 38.

Beckman’s team, which last year was tuned by the triumvirate of John Medlen, Dean Antonelli, and Neal Strausbaugh has been pared to just two as Strausbaugh was drafted onto Leah Pritchett’s DSR dragster to assist Todd Okuhara after the departure of Joe Barlam.

Former world champ Del Worsham, who finished the season as a fresh set of eyes on Shawn Langdon’s Global Technology Toyota, will forgo running his own family-owned Funny Car this year to continue in that role. Langdon showed some real promise last year and a first Funny Car win this season is certainly a very real possibility. Worsham may at times bring out his Funny Car as a rental to drivers as he did throughout 2018, but that has not been determined yet.

Finally, Blake Alexander, who shook up the Top Fuel troops with two wins last year as part of Vandergriff Racing, will return to his Funny Car roots this season. He has purchased a complete operation and will run the car, with Daniel Wilkerson as crew chief under the direction of Tim Wilkerson.