Jet cars have been part of the drag racing landscape since the early 1960s, and are still featured at NHRA national events. Here's a look back at some of the earliest and wildest of the breed.
28 Sep 2018
Phil Burgess, NHRA National Dragster Editor
DRAGSTER Insider

Feedback from the last couple of couple of columns focusing on jet-car legend Doug Rose and his protégé, Doug Brown, made it clear to me that there are a lot of residents of the Insider Nation who still dig the jet cars. Not surprising, I suppose, as this particular flavor of dragstrip vehicles has deep roots in the sport dating back to the early 1960s.

The National Dragster photo archives has two very thick folders of assorted jet cars packed with cool photos of the flamethrowers. Digging up photos for the Rose and Brown articles, I became entranced by some of the images and vehicles and thought I’d do a little show and tell to stoke your memory banks and/or wow those less familiar. It’s not intended to be a history of jet cars or to showcase (or overlook) anyone, just some cool stuff and, actually, there’s a lot more show than tell because information on some of these cars was not readily available, but I think you’ll still feel the heat. 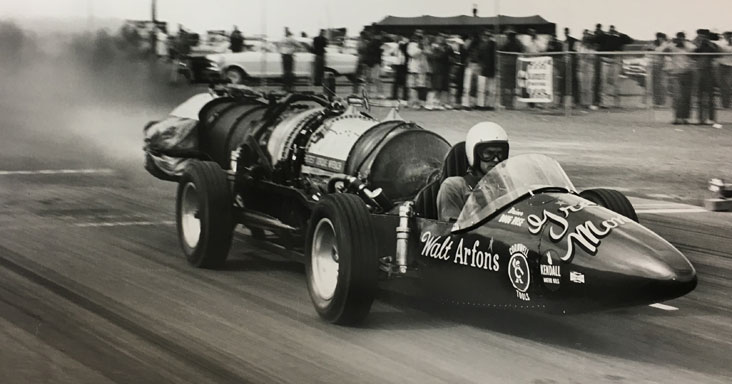 Jets have been on the scene since roughly 1960 when Walt Arfons, one of the sport’s earliest innovative geniuses switched from the Allison aircraft engines he’d been running in his perpetually top-speed-setting Green Monster to Westinghouse jet. Here’s Doug Rose after taking over the wheel of that car before he went out on his own with the Green Mamba. What passed for safety equipment and rollover protection is alarming. 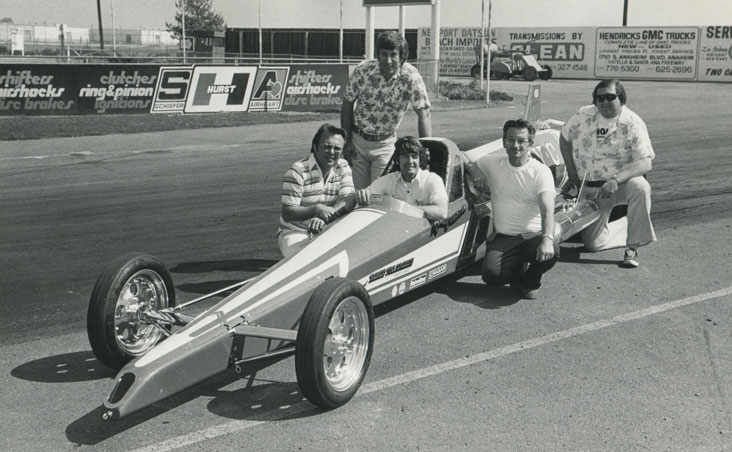 Romeo Palamedes followed soon after with his Untouchable jet dragster and enjoyed a long partnership with late jet-car godfather Roger Gustin at the wheel. Here’s a pretty cool mid-1970s photo of Gustin (in the cockpit) and Palimedes, second from right in one of Palamedes’ cars after inspection at Orange County Int’l Raceway by NHRA’s jet-car safety team, from left, Bernie Partridge, Jim Dale, and John Keeling (of Keeling & Clayton Top Fuel fame, who was an NHRA consultant).

Palamedes also was one of the first to have a bodied jet car, with the Charjet, a J-34-powered ’67 Dodge Charger driven by former fuel dragster pilot Ray Maurel. 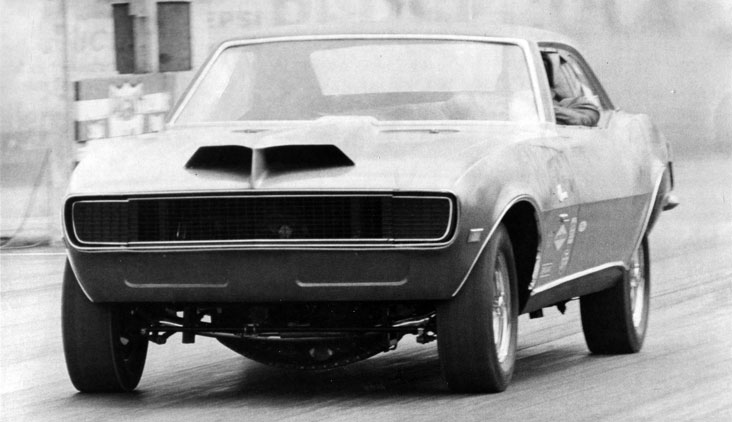 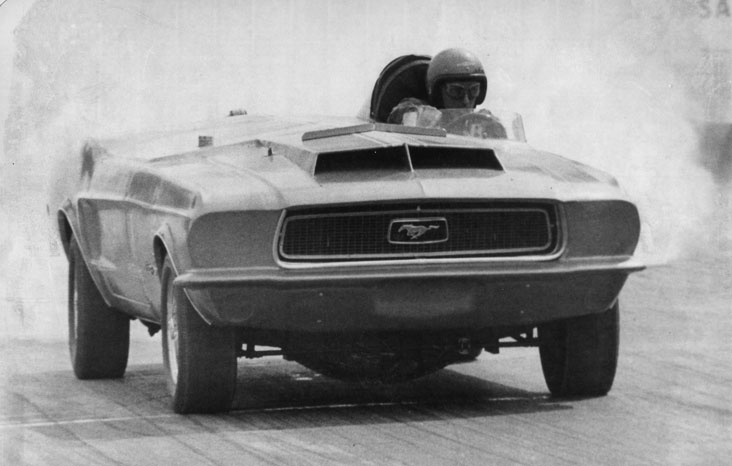 Motz often raced against this Mustang, owned by Walt Arfons and driven by Fred Sibley. Again, not a lot of rollover protection here.

Another early jet “doorslammer” driven by Gustin was the Time Machine Mustang which, according to the caption on the back of his photo, blew out the windshield at 200 mph on this pass. 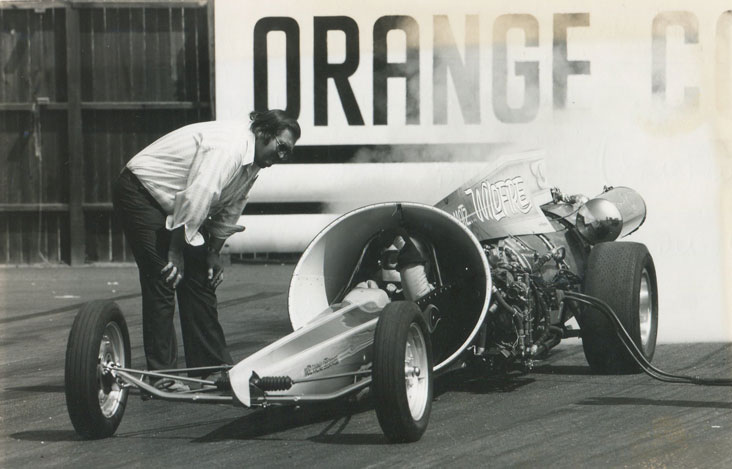 Another pre-truck jet car of Motz’s was this wild-looking machine called Widfire, with its huge air-sucking cowling. That’s Keeling checking in on Motz as he prepares for a license run.

Here’s Motz and the Wildfire taking on Jerry Studnicka and the Compulsion entry at Raceway Park in the mid-1970s. 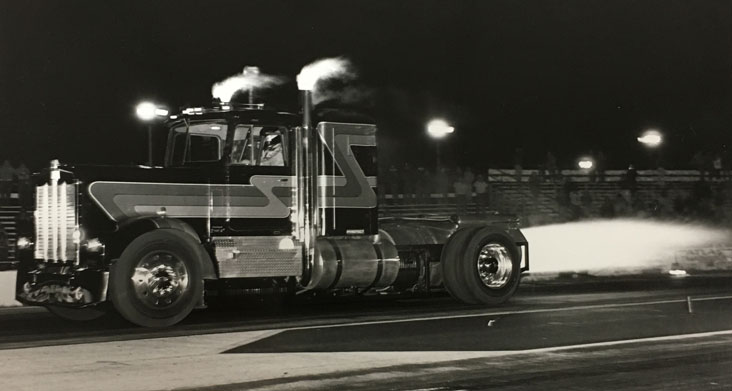 OK, I can’t possibly go any longer talking about Motz without showing the truck. It's bad-ass. So, there you go. 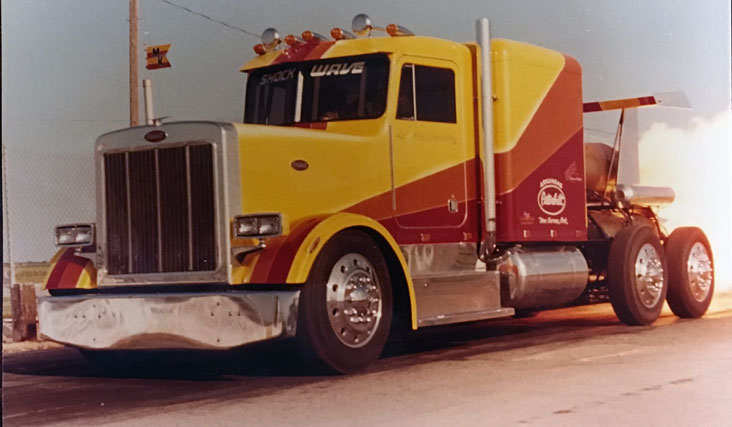 Or talk about Motz’s truck without showing the Shockwave truck of Les Shockley. OK, cool, got that out of my system. 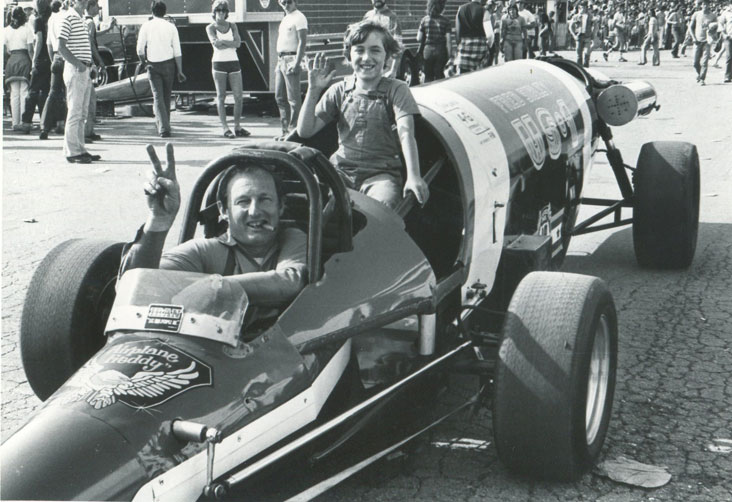 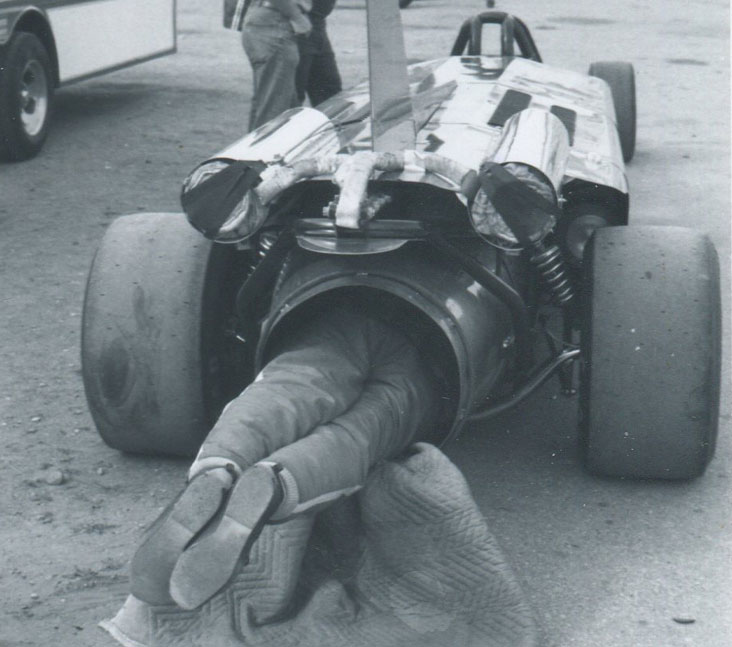 Talk about your dirty jobs. I don’t know who this is or whose car, but he’s a trusting soul.

Al Eierdam and the coolly-themed Emergency jet take on an up-in-smoke Funny Car at OCIR, but the photo’s not about either of them; it’s about starter Larry Sutton, straddling the A-board to launch them. Brave man. 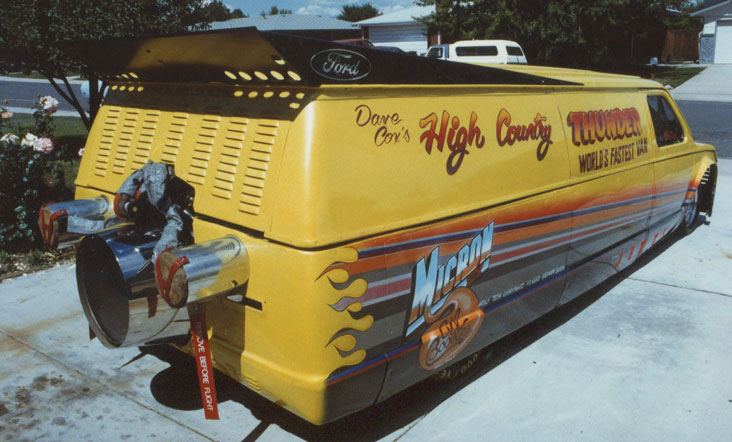 This is Malcom Olley’s Pink Panther jet out of the United Kingdom. It scares me and makes me all tingly at the same time.

OK, guys, that’s it for the week. I do have dozens of other jet photos that I can share, maybe in another column down the road. There’s some outrageous stuff there. Thanks again for visiting.