Not really a dragster and certainly not a Funny Car, the Tom McEwen-driven Super Mustang was a super oddity that certainly was not one of Ford's "better ideas," but remains a car well remembered by many drag racing fans.
27 Apr 2018
Phil Burgess, NHRA National Dragster Editor
DRAGSTER Insider

Several of you, tongues firmly planted in cheek, chastised me for not including the “other” Super Mustang in last week’s homage to Mustang Funny Car bodies. I did include Ron Pellegrini’s Super Mustang early Funny Car but – purposely -- not the crazy Tom McEwen not-a-dragster-not-a-Funny-Car Super Mustang, so I will address that car this week, cribbing from an article I wrote for National Dragster a while back. 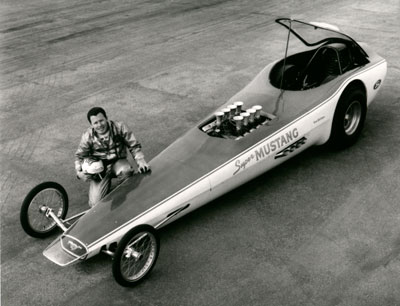 The Super Mustang dragster was commissioned by Ford as a promotional tool in the winter of 1966 and ran only a few times after its debut at the 1967 Winternationals. McEwen was at the wheel for the super-slick dragster’s short life span, and how he ended up there in the middle of a Hall of Fame career is just part of the intriguing story behind this machine.

Ford was a big supporter of the A/FX class, which would morph into Funny Car eliminator. By 1966, it had an all-star lineup in its A/FX Mustangs with guys like Bill Lawton, Dick Brannan, Tommy Grove, Darrell Droke, and Gas Ronda were behind the wheel of the potent pony cars.

But according to the book Extreme Muscle Cars: The Factory Lightweight Legacy, written by Brannan, Bill Holder, and Phil Kunz, Ford didn’t sponsor the A/FXers in 1967, “choosing instead to concentrate on production car performance and image.”

Though Ford again ramped up its drag racing involvement in 1968 with the famed Cobra Jet invasion at the Winternationals, 1967 was a transition year while those cars were assembled, and from that void somehow was born the Super Mustang. McEwen describes it as a “pet project” by the team that designed the first Mustang production car.

Ford commission the famed Logghe brothers — Ron and Gene — to build the car at their Logghe Stamping Co. shop in Fraser, Mich., a car that Ford expected might someday be the “Top Fueler of the future.”

Way back in 2010, I tracked down Brannan and talked to him at length about the car, which he reports was first the brainchild of the Ford Styling Department, originally built as a promotional tool but later handed off to Special Vehicles, where Brannan worked with Ford Drag Team Manager Chuck Foulger. 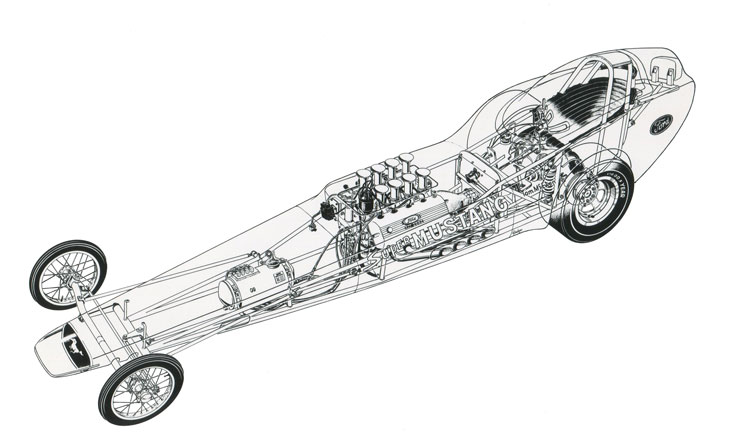 The ever-innovative Logghes threw the engineering book at the car, building a 150-inch chassis with a sophisticated rear suspension — most slingshot dragsters of the era had solid-mounted rear ends and no suspension — made up of a Posi-Traction rear end suspended by a pair of coil-over shocks, traction bars, and an anti-sway bar.

A swoopy body was conceived at the Ford Design Center and its shape perfected in Ford’s wind tunnel. A bubble canopy covered the cockpit, blending seamlessly into a rear section that covered the rear slicks. It was one sexy-looking piece. 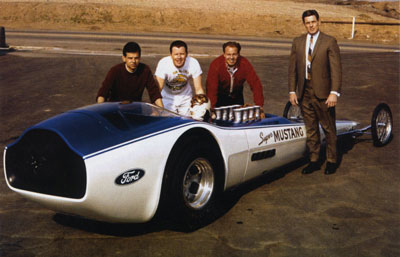 Ford debuted the car at a pre-race press conference in which Jacques Passino, Ford Division’s special vehicles manager, said that the car’s primary purpose was to explore conditions that exist at the dragstrip at speeds about 200 mph and shared a message that’s eerily familiar to Ford’s involvement in recent NHRA safety initiatives. “All of our experience has taught us that we belong in drag racing and that the concrete improvements we can give the sport because of our size and resources will be beneficial to everyone,” he said. “What we learn will be used to develop safer drag cars. We feel this is a responsible approach to the sport.”

So, how did McEwen end up being Ford’s handpicked guy to drive its new wundercar? 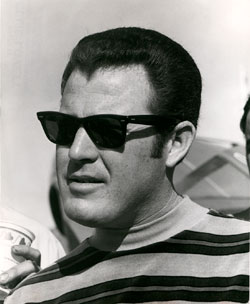 McEwen had bounced around to a lot of cars in the early 1960s — owning a few, partnering in others, and being a hired gun in still others — before landing what he called a dream ride in Ed Donovan’s vaunted Donovan Engineering Special in early 1964. (Within just a few weeks, Donovan, whom everyone called “the Mole,” gave McEwen his famous “Mongoose” nickname.) Later that year, McEwen jumped ship to drive for Lou Baney — one of the sport’s early impresarios — in his Yeakel Plymouth dragster, sponsored by the dealership where Baney was the general manager. Baney was a major wheeler-dealer (he was the one who convinced the Plymouth Dealers Association to sponsor McEwen’s ill-fated rear-engine Hemi ’Cuda) and in 1966 purchased the Brand Ford dealership, making the continuing use of a Chrysler powerplant somewhat hypocritical, so by Indy of 1966, the team, with “the Old Master,” Ed Pink, tuning, switched to Ford’s new SOHC powerplant, joining Connie Kalitta and Pete Robinson. 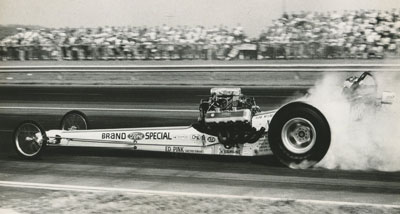 Unfortunately for McEwen, the Ford engine was stuffed into their old Woody Gilmore chassis and cobbled together to make it work. The Brand Ford car didn’t handle well, and with Pink getting a slow handle on a new tune-up for the finicky Ford, McEwen tried to compensate with killer reaction times but left many a red-light hanging on the Tree. Finally, as the losses piled up, everyone became frustrated, and, before he knew it, “the Mongoose” was replaced by, of all people, his nemesis, Don “the Snake” Prudhomme, who was coming off his first season as an independent in the B&M Torkmaster car. The parting with the Brand Ford team was amicable, according to McEwen.

McEwen, however, had made friends at Ford in his time running its engine, including Brannan and Foulger. 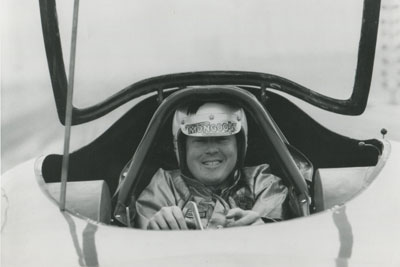 The Super Mustang’s chassis was completed in December 1966 and trailered to Florida, where Kalitta shook it down, sans bodywork. The car was shipped to California, where the bodywork was added prior to its Winternationals debut. Kalitta and Tom Marsh built the injected 427 SOHC engine.

McEwen, who had never even sat in the car before it showed up in California, didn’t fit properly in the cockpit, and the rear suspension was troublesome.

“It was real small, real tight trying to get in there, and my head was mashed by the canopy,” recalled McEwen. “It wasn’t real comfortable.”

Regardless, the car definitely looked better than it ran, charting just an 8.60 at 180 mph. By comparison, Kalitta won the event with his cammer, running a best of 7.17 at 218 mph.

“Despite all of the money and brains behind the project, it was, to put it bluntly, a dog,” said McEwen.

According to Brannan, the canopy blew off on one of the passes during the Winternationals, but they repaired it and returned to Pomona after the event and “fooled with it for a while and had it running pretty good,” though he could not recall its best numbers.

“It was an ‘off-budget’ project to begin with and never really had the financial support it needed to continue,” said Brannan. “It was viewed by some as a bit of a white elephant. It didn’t perform real well and would have taken a lot of development work to make it competitive.”

Before long, the car was unceremoniously parked, McEwen moved on to drive the Bivens & Fisher Checkmate dragster (which quickly set the national record), and the Super Mustang was relegated to Ford displays at car shows, where it was a real crowd-pleaser, according to Brannan. 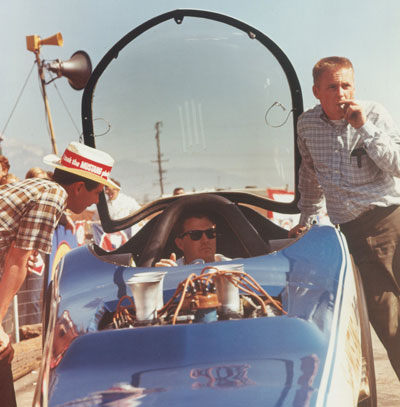 In a story called “The Ten Big Mistakes in Drag Racing,” printed in the October 1970 issue of Drag Racing USA, former National DRAGSTER Editor Mike Doherty rated the Super Mustang No. 4. “Lacking dragster horsepower and Funny Car identification, with its enclosed cockpit dragster body and frame, the super expensive Super Mustang was retired before it was even warmed up, and is now reportedly occupying a stall in Dearborn next to the inventory of unsold Edsels,” wrote Doherty, also somewhat tongue in cheek.

The car later was sold and went through a number of owners (including, reportedly, Mickey Thompson) before Don and Joan Lyons of Dowagiac, Mich., purchased it in 2003 and restored it to its original condition. They displayed the occasionally at car shows, then sold it in 2009 at a Monterey, Calif., auction for $154,000. I have no idea where it’s at now, other than on these pages.

Whether you liked the car or not, despite its lack of success it’ still a car that marked another interesting milestone along the way in the history of our sport.