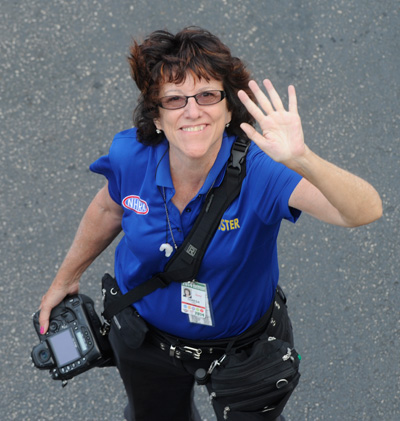 Whether you’re reading this on your mobile device in the stands while watching the action at Pomona or watching the Auto Club NHRA Finals on television, you might notice the absence of a familiar presence on the starting line. Teresa Long, National Dragster’s Photo Editor for more than 20 years, retired last Friday after more than 30 years with the NHRA.

When it comes to NHRA headquarters longevity, T.L. was only behind me and tied with Graham Light (who also is calling it a career this year), as both joined the NHRA team in 1984, two years after I signed on. Only Teresa’s lifelong friend (and I’m talking kindergarten here), advertising super salesperson Joni Elmslie, has more overall tenure with the NHRA than the three of us, having started in the NHRA Field Office in Upland, Calif. (while headquarters was located 50 miles west in North Hollywood) in 1980.

As you could imagine, spending 30-plus years in the trenches with someone - traveling, covering events, after-race dinners, and the continual deadline pressures of creating a publication -- forges an incredible bond, so it was a day of mixed emotions as we said goodbye to Teresa last Friday with an in-office celebration. I’m happy for her that she’s going to get to enjoy some well-deserved time but sad that I won’t be seeing her and working with her every week.

As a staff, we’ve been through a lot together -- changes in format, leadership, staff reductions, travel woes, personal triumphs and tragedies, and so much more – that has created a familial bond between us, even among those with less seniority. 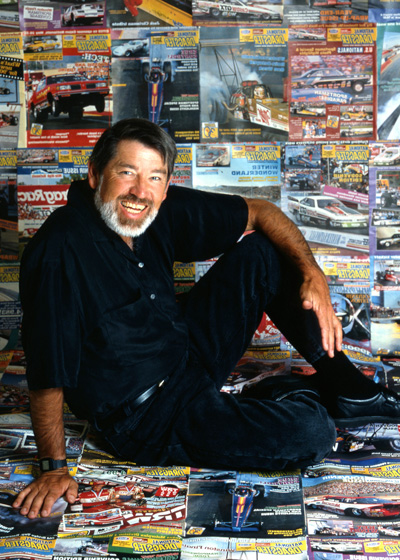 But T and me … man, we’ve been through some stuff. The sudden passing in 1996 of ND’s great photo editor Leslie Lovett, shook us both, her more deeply than me. Even though he was, as I’d introduce us to racers when we teamed up on features –- “I’m words, he’s pictures” –- he was a mentor to me in my early days here, showing me the ropes of travel and introducing me to racers who all loved and respected him and if, by golly, Leslie vouched for you, you were golden. But to Teresa he was so much more than a photography mentor and cohort, as they also enjoyed a personal relationship outside of the job. We grieved him that day and probably every day since then and neither of us enjoyed anything more than coming across an old photo of him or marveling at the photos he took. We still revered him. The great photo at right is one of Teresa's amazing portraits, featuring Leslie with scores of National Dragster covers that he shot over the years. 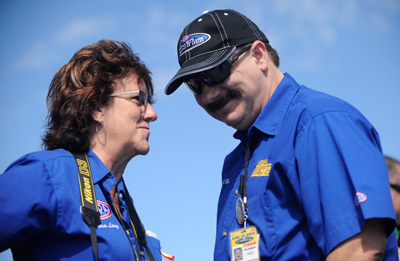 But as she took over the heavy mantle of that position, my respect and love for her grew by leaps and bounds. We collaborated closely on everything, counseled and lifted one another up in tough times, and enjoyed our shared history of knowing and working with people over four decades, a colorful collection of characters who shared our world, many of whom have now passed away. I mean, if you hadn’t personally met Bill Crites, there’s little anyone can do to try to adequately capture his character (though Heaven knows, I tried here and here). We could spend hours reminiscing about those days at the North Hollywood headquarters on Riverside Drive where we first met. 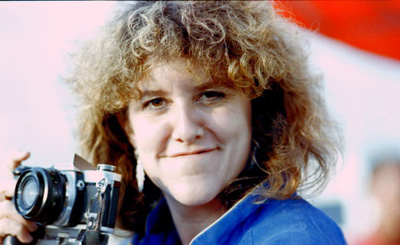 Back then, Teresa was “the halftone girl” who appeared late in the day and worked overnight to turn our black and white photos into the dot-based images for print publication. There could be hundreds of images per issue, each tagged with a name or number and a percentage to which, using a special camera, she should reduce it to fit its particular hole in a layout. We’d leave them in a basket for her and come back the next day to find her overnight Easter Bunny-like work ready for paste up. 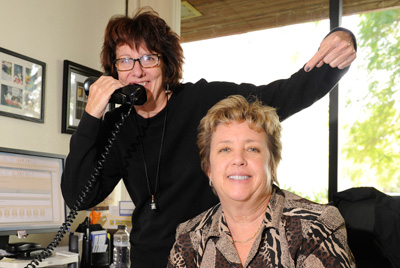 She was already a skilled photographer and only grew from there. She became the go-to person for personal portraits of all kinds, her creativity matching her technical prowess. One of the coolest things I ever saw her do was to hand-color some black and white photos, turnng them into artistic, full-color versions. Any reader of National Dragster back into the 1990s might remember the creative ads she did with Joni (that's them together at right) to promote Joni’s Race Shop section in ND, a dazzling array of photos filled with props and catchy messages to encourage people to advertise in the section. 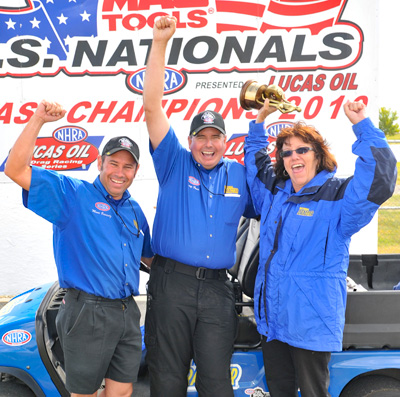 As the company-wide needs and the schedule grew, she managed a staff of photographers who learned from her and the team, guys like Richard Wong and Steve Bianchi and, of course, the two guys she leaves behind now, Jerry Foss and Marc Gewertz, her right-hand men the last two decades, who will proudly carry on her work, devotion, and dedication.

In typical Teresa fashion, she didn’t want anyone to make a big deal about her leaving –- believe me, we tried -- and even ],though she confided in some the last few weeks, I think there are going to be a lot of racers over the next several months who are going to be surprise – and saddened – by the fact that they’re not the focus of her attention. Like Leslie, she had a way with people, and was universally loved throughout the pits, an accomplishment that probably means as much to her as any award.

I’ll get the chance to collaborate with her one more time as I’ve convinced her to sit me to talk about her favorites photos that she shot over the last 30-plus years, and we’ll present that in our year-end issue in a few weeks.

We’re gonna miss ya, Teresa, but your work will remain seen forever, as will our memories of working with you.