A history of our sport, one story at a time

For more than 10 years, the Dragster Insider has been sharing "the stories behind the stories" that make up the history of our sport, offering an unparalleled and in-depth look at the heroes and machines who were and are the stars of our sport.
26 Jan 2018
Phil Burgess, NHRA National Dragster Editor
DRAGSTER Insider

You have arrived at your destination.

Whew, thank goodness. With a sigh of relief and a final mouse-click earlier this week, I completed the long and arduous process of manually recreating all of the stories in Dragster Insider archive dating back to the column’s launch more than 10 years ago.

As you may (or may not) remember, when NHRA launched the current version of NHRA.com about this time a year ago, provisions were made only to bring over the last year’s worth of content. We had great plans to eventually migrate all content (about 20 years’ worth) but, like many great plans, they were just that: plans.

Because I’ve poured my heart and soul into this column all these years, I couldn’t bear the thought of all that hard work, all those great memories, all those amazing photos, and all that history being lost, so rather than wait for a day that probably wasn’t going to come anytime soon, I began moving them over manually. I documented some of the “fun” of this endeavor in a column last year followed by an early look at the progress and now my work is complete.

The 2011 columns were the last to be completed – after completing 2015-2012 I realized what an idiot I was because working backwards didn’t allow me to put in the correct links to earlier, not-yet-transferred articles, so I then switched to 2007 and worked my way back to 2011 – and I have to tell you it’s been an amazing journey. In all, there are more than 600 columns and, I’ll be honest, about 10 percent of them I don’t even remember writing.

I knew I’d covered a lot of topics over the years but I didn’t realize how many until I began combing through them all, and, serendipitously enough, 2011 and 2010 were packed with great stuff and I’m thrilled to have them all accessible again. I’m even enjoying re-reading them. 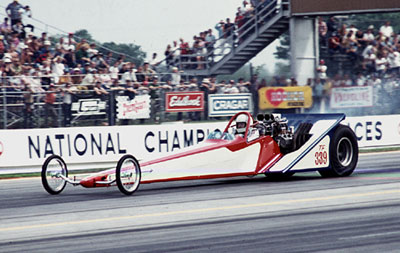 2010 was memorable for a very long thread about wedge Top Fuelers that started with Connie Kalitta's ill-fated wedge that crashed at the 1971 U.S. Nationals and before long we were talking about all of other wedges (Don Prudhomme, Chris Karamesines, Leland Kolb, Kenney Goodell, and others), and then wild pieces like Barry Setzer's monocoque Top Fueler, the Lisa & Rossi wedge, the Dunn & Kruse Funny Car/streamliner, the Piranha and much more. It spanned 13 columns over several months before we were done.

Incredibly, within a few weeks, we embarked on another double-digit-column thread, this time on the great old ramp trucks that hauled Funny Cars across the country in the late 1960s and early 1970s before enclosed fifth-wheel trailers became the thing. 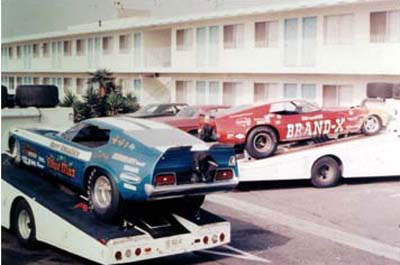 In all, we probably came up with more than 100 ramp truck photos and a number of different related topics like a history of Tommy Ivo’s tow rigs, re-creations and restorations and more.

Other memorable columns from 2010 were my piece on Ron Pellegrini, the first mass producer of fiberglass Funny Car bodies and a piece from Jon Asher on the story behind the famed Warren & Coburn “garage photo”; multiple pieces on injected Funny Cars; and much more. 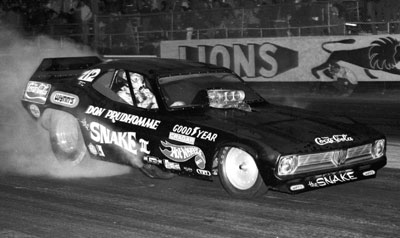 The 2011 collection included an intriguing series of columns about the fate of Don Prudhomme’s original Hot Wheels Cuda Funny Car and the story behind the notoriously-cool black “Snake III” Cuda; a tasty series of columns about dragstrip food, from Irwindale’s In-N-Out Burger connection to Amarillo’s eat-it-in-an-hour-and-it’s-free 72-ounce steak from the Big Texan in Amarillo and much more. There’s also a detailed, three-part “spotter’s guide” to the cars of Don Garlits that will make you an instant “Swamp Rat” expert, plus lots more about “Big Daddy” in the form of your stories and photos.

Towards the end of the year I did a fun couple of columns on “cars with scars,” patched up bodies in the wake of some ontrack malady that dovetailed into a looked at topless Funny Cars and, before you knew it, we were back into a long thread, this time on rear-engined Funny Cars, where we took a look at the cars of Jim Dunn (still the only rear-engined national event winner), Dennis Geisler’s ill-fated Hindsight machine, and the story behind the Nightstalker, a rear-engined, chain-driven Mustang built by Jack Chrisman that ended up being the first Funny Car that John Force drove (and the subject of a lot of other intrigue). 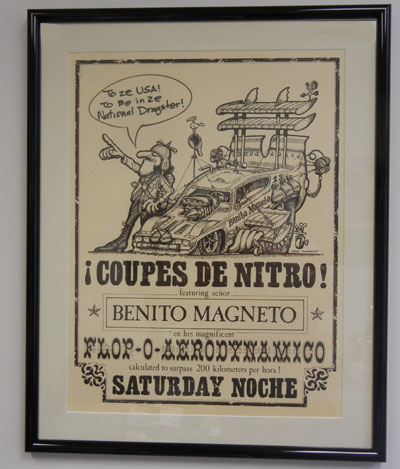 Other fun reads include a piece with Kenny Youngblood on the inspiration for his well-known Benito Magneto illustration; the passing of West Coast Top Fuel legend James Warren; final rounds that went wrong, and a lot more.

I’m pretty sure that it’s as complete and correct as it can be at this point (big tip o’ the hat to Robert Neilson for finding a bunch of busted links) and I hope you’ll enjoy revisiting some articles you, too, may have forgotten about or, if you’re new to this column, stuff you didn’t know existed.

I’ll always have a link at the end of each column that points to the archive for your browsing ease. It’s searchable using the built-in page search for any browser or mobile device.

Thanks for the outpouring of suggestions for future Insider columns after last week’s pouty rant about people dying. I mentioned it kind of tongue in cheek and got a lot of “thanks for what you do for those guys” support, which I really appreciate, knowing that it may be one of the lst times that anyone does a tribute of any significance. It’s always great to hear from families -- especially the kids – of the people I eulogize, who are always thankful that their loved ones not only are remembered but still appreciated.

That being said, I did get a number of great suggestions that I’ll get to this year (with due credit given for the idea), in addition to topics of my own choosing.

I feel like together we’re creating this great history book of our sport that people can enjoy for years to come. Thanks for all your help in doing that.

Unfortunately, it wouldn’t be a week in our lives without having to report another couple of losses. D. Gantt, who was part of the all-star crew for Raymond Beadle’s Blue Max in the late 1970s and early 1980s, passed away last Friday after a long battle with cancer. He was 72. Gantt, whose full name was Dwayne, also worked with the likes of Trojan Horse Funny Car driver Larry Fullerton, wheelstander great Bob Riggle, Fuel Altered icon "Wild" Willie Borsch, Fred Goeske, the great "TV" Tommy Ivo, Kenny Bernstein and Connie Kalitta. He joined guys like Dale Emery and “Waterbed Fred” Miller to form the nucleus of the great Blue Max squad and later went to work on Beadle’s Rusty Wallace-driven NASCAR team and their Sammy Swindell-wheeled World of Outlaws car to assist with the cylinder-head program.

“That was just such a good team,” Miller told me yesterday. “We all knew each other and worked together so well it was like no one ever needed to say anything, and Dale was the glue that held us all together. And, of course, Raymond was a great car owner who gave us everything we needed and let us do our thing without much interference. Those were special times.

“D. was so much more than just a crewguy. He was incredibly well-read and he could do anything. He was a big part of the success of the Max.”

We also lost a longtime friend of mine and anyone else who’s hung out on the starting line, veteran photographer Tim Marshall.

“Everybody had a Tim Marshall story; he was quite the character and one heck of a drag racing photographer,” reflected Steve Reyes, who toured with Marshall in the early ‘70s as they covered the growing sport and again in the 1990s on the Super Chevy magazine tour. “His early stuff when working for Drag Sport Illustrated (1965) was beautiful; lots of action and sharp as a tack. When he was at his best nobody could outdo him.”

As Reyes said, we all have Tim Marshall stories, and I’m certainly in that group. I first met Tim on the starting line at Orange County Int’l Raceway in my early years at National Dragster. I was a bit intimidated at first to be standing among guys like him, Reyes, Bob McClurg, Jon Asher, et al, guys whose names that had been burned in my head as I envied their job of traveling the country and getting paid to attend drag races. Tim and I quickly bonded over our love for the little-guy Funny Car racers, folks like Rodney Flournoy, Ray Romund, and Al Arriaga.

Tim also loved a good “leaker,” and the opportunity they provided for some pyrotechnics. Tim sometimes had a sarcastic little voice he’d effect. A car could be leaking on the line and he’d say “Send ‘em,” because he knew something crazy might be in the making and he wanted to be there to capture it. I’ll never forget the story of him talking to Top Fuel racer Gary Omlin, who ran a wingless Top Fueler called “the Sugarman.” This was in the mid-1980s, well after everyone thought we needed a wing on a dragster. Tim reportedly went up to Omlin, handed him a business card, and said, “You call me any time you’re going to run this thing. I want to be there.”

That was Tim; he always wanted to be where the action was. I saw him just last year at the Finals, said our traditional hello, and I remember thinking at the time, man, I’ve known him a long time and he was here long before I was and he’s still doing it. Good for him. We’ll miss ya, Tim.

Thanks again to everyone for your help over the years. Ten-plus years now; let’s do another 10.