Richie Crampton grabbed the eighth Wally of his career; while Eddie Krawiec started his title defense with a win; and Jack Beckman and Tanner Gray got their first wins of the year at the Amalie Motor Oil NHRA Gatornationals.
18 Mar 2018
Posted by NHRA.com staff
Race coverage 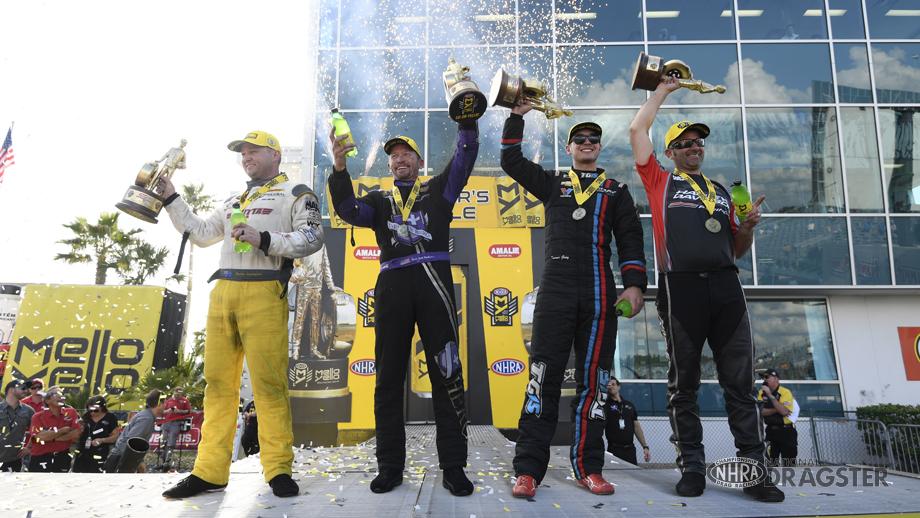 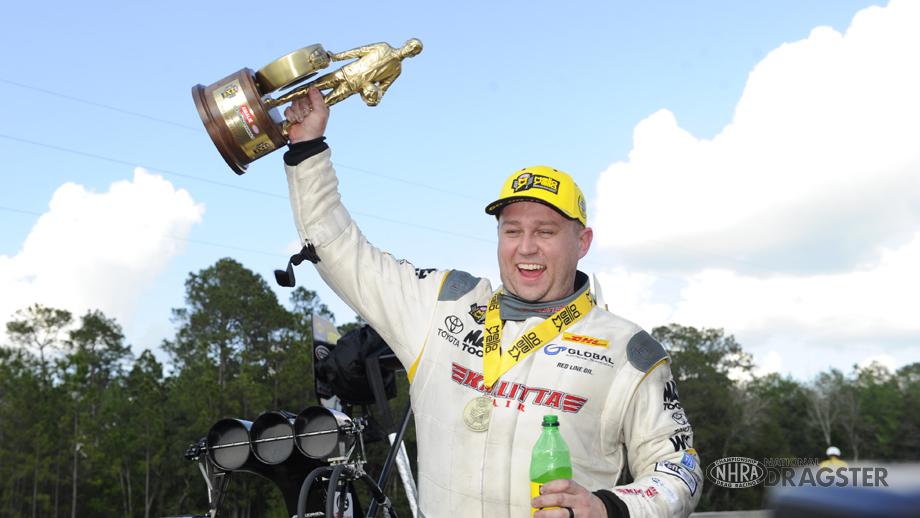 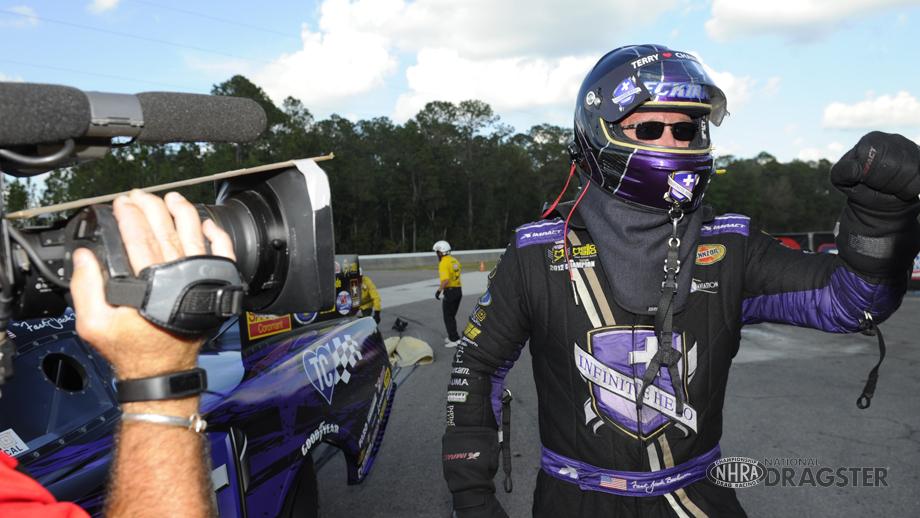 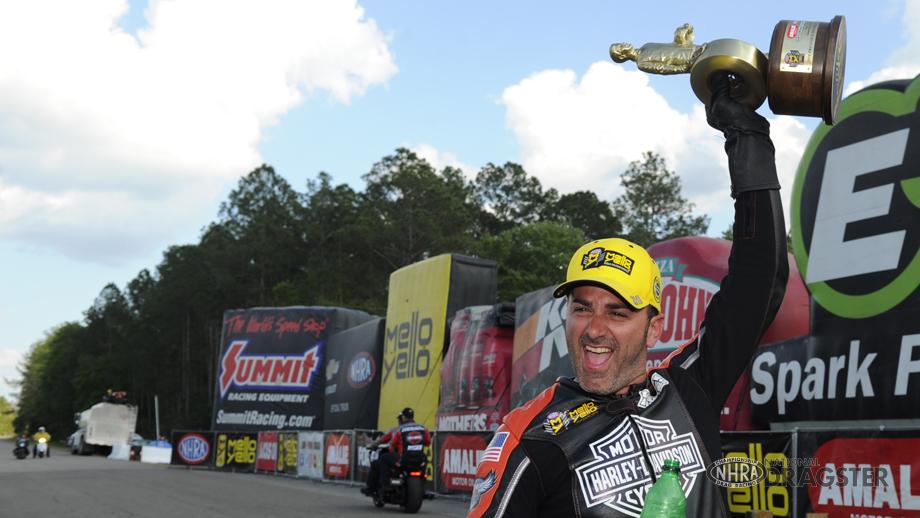 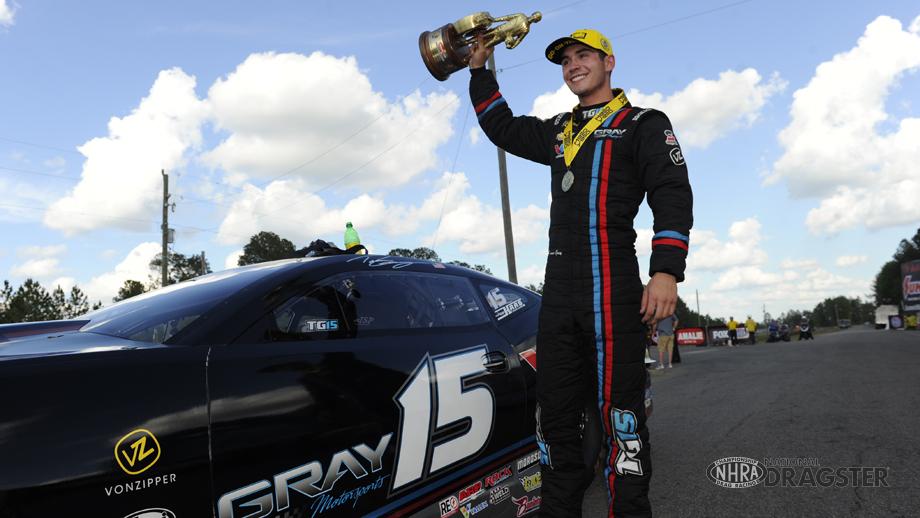 Crampton got the uncontested win when he piloted his Kalitta Air/DHL dragster to the winning run of 3.854 seconds at 314.90 mph after Shawn Reed had to shut off his dragster on the starting line. This is Crampton’s first Wally since Dallas 2015, first event victory at Gainesville Raceway, and eighth overall.

“This is probably one of my most rewarding wins, ever,” Crampton said. “All I ever wanted to do was stand in the winner’s circle with (team owner) Connie Kalitta. Not a lot of people have had that luxury and I’m not taking this one lightly.”

Reed, who raced to his first career final round, started from the No. 12 position and defeated Pat Dakin, Tony Schumacher, and No. 1 qualifier Clay Millican before the final.

Beckman claimed his first Funny Car victory at Gainesville with a hole-shot win of 4.035 at 323.58 in his Infinite Hero Dodge Charger R/T against teammate Matt Hagan. After earning the No. 1 qualifier on Saturday, Beckman secured his first victory since St. Louis 2017.

“Winning this race was such a bucket-list thing,” Beckman said, “The Gatornationals came on the schedule in 1970, that year was a big year for our sport and it has been at this track ever since and I’ve never gotten close.”

Beckman raced against Jim Campbell, Del Worsham, and Shawn Langdon before entering his first final round of the season.

Hagan and Robert Hight experienced side-by-side explosions during the quarterfinals destroying the Funny Car bodies of both competitors. Hagan brought out a back-up car to defeat teammate Ron Capps in the semi-finals to advance to his second final round of the season.

In Pro Stock, Gray powered his Gray Motorsports Valvoline Chevrolet Camaro to victory with a run of 6.588 at 210.18 to defeat defending category world champion Bo Butner in the final round. This is his first career win at Gainesville and is a third-generation event winner.

“We’ve been struggling since the beginning of the season,” Gray said. “Today was our first-round win of the season. It has definitely been a struggle, but I think it is starting to come around.”

Gray was the first driver since 2015 to win from the No. 11 qualifier position and defeated Deric Kramer, Chris McGaha, and Vincent Nobile. Butner qualified in the fifth position and bested Jeg Coughlin Jr., Alan Prusiensky, and Drew Skillman before facing Gray.

Defending event and world champion Eddie Krawiec rode his bike to winner’s circle with a pass of 6.824 at 198.44 on his Screamin’ Eagles Vance & Hines Harley-Davidson. This is his sixth event victory and third consecutive win at Gainesville.

“Right now, I’m riding with the confidence that no one can beat me,” Krawiec stated. “I have a great motorcycle underneath me and a great team behind me. Anytime a rider or a driver has confidence it just makes them that much better.”

Krawiec was the No. 2 qualifier and was victorious against LE Tonglet, Steve Johnson, Hector Arana, the No. 1 qualifier, and teammate Andrew Hines in the final round.