If you were a drag racing fan in the 1960s and 1970s, you knew the Color Me Gone name even if you couldn’t recall the name of its driver, Roger Lindamood, who tore up dragstrips around the country for more than a decade. We lost Lindamood Oct. 14, at the age of 91.
23 Nov 2018
Phil Burgess, NHRA National Dragster Editor
DRAGSTER Insider 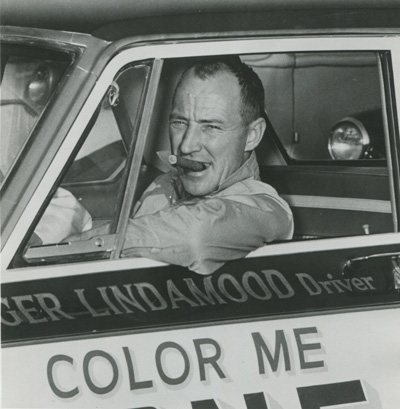 If you were a drag racing fan in the 1960s and 1970s, you knew the Color Me Gone name even if you couldn’t recall the name of its driver, Roger Lindamood. He made that kind of an impact in his 15-year career on the quarter-mile, from his breakthrough win in Top Stock at the 1964 Nationals through more than a decade of nitro Funny Car racing with a consistently tough race car.

Truth be told, drag racing was almost an afterthought to Lindamood, who didn’t begin drag racing until he was 35, after racing on dirt and asphalt ovals, yet he turned his gift of mechanical prowess, self-promotion, and a gritty work ethic into a celebrated quarter-mile career. We lost Lindamood Oct. 14, at the age of 91.

Word was slow in getting out until I heard last week from his son, Randy. “My dad didn’t want any kind of services, but I just didn’t want to let his passing go unnoticed,” he told me. “Other than family and close friends, you’re really the only person in the drag racing world that I’ve reached out to and I’m hoping you would do him proud.”

As I mentioned already, Lindamood was a drag racing late bloomer after his oval-track efforts. He was considered one of Michigan’s top 10 oval-track drivers when he retired from the circle game in 1955 and later began putting his mechanical skills to work at Chrysler’s “transmission lab,” working on automatic transmissions for the company –- and his fellow employees.

“He would take someone’s car from work, drive it home, and pull the transmission after dinner, rebuild it, and bring it back to work the next morning and get paid for it on the side,” recalled his son. “He’d be out there for four or five hours pulling things apart and putting them back together. He was just one of those guys who could take something apart, even if he’d never seen it before, and put it back together.” 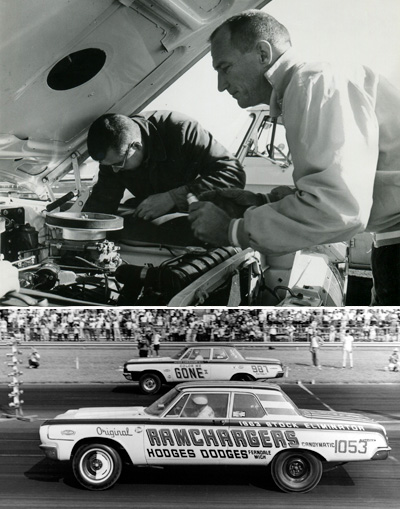 Lindamood was instrumental in the vaunted Ramchargers team’s switch from manual to automatic transmissions, and it was that work that put him into contact with race-car fabricator Dick Branster, who in 1963 tried to coax Lindamood into drag racing. Pictured right, that's Branster on the left and Lindamood on the right.

Recalls his son, “My dad’s first words to Dick were ‘I wouldn’t give you a nickel to walk across the street to watch a drag race. It’s boring,’ but that attitude quickly changed when they gunned down the factory teams of Al Eckstrand, Hayden Profitt, Bill Lawton, and Gas Ronda to win the coveted Top Stock title at the ’64 Nationals in Indy. Even a decade and many, many Funny Car runs and match-race wins later, Lindamood said in a 1975 National Dragster interview that the Indy win remained his biggest thrill.

The car was already branded as Color Me Gone, taken from one of the final line of the “My Coloring Book” tearjerker that was a hit song in 1963. The team had shoe-polished the words “I’m a Plymouth … Color Me Gone” on the car at one event, and the track promoters picked it up and Lindamood and Branster quickly made it a permanent addition to the car. 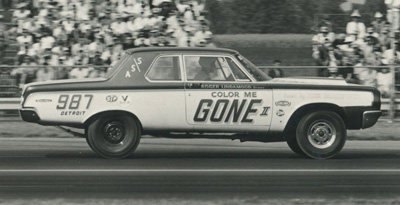 Lindamood didn’t stay in the stocker long, as 1965 saw the beginning of the altered-wheelbase precursors to Funny Car. He originally competed just on pump gas but before long had switched to injectors and nitro and, ultimately, a supercharger.

During this same time, Lindamood was an early test driver for famed Little Red Wagon Dodge D100 truck back when it was a performance test mule instead of a wheelstander and also drove Branster’s wild rear-engined Dodge Charger Dart, but his heart was in already in the Funny Car camp.

After campaigning steel-bodied Funny Cars through 1966, Lindamood made the leap to a fiberglass fastback Charger pictured above in 1967 that pared 550 pounds off of the car’s weight. With the exception of the Logghe chassis and the B&N Charger body, Lindamood built the car himself and even created a cooling system for the engine using a marine bilge pump to circulate water through the block in an age where most of his competitors would just fill the block with water. The car also used a standard 12-volt car battery mounted in the chassis to start the big Hemi instead of the conventional 24-volt remote starter and he installed modified police-duty brakes with one composition shoe and one metallic shoe that would hold the car on the starting line but also not fade under hard braking. Yeah, he was into it. 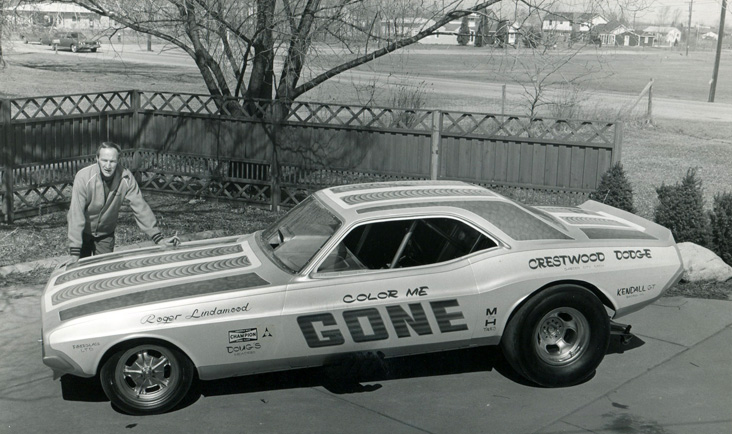 “One day Dad came home from work and told my mom he was going to quit working at Chrysler to go racing, and she was just horrified … ‘What are we going to do?’ “ his son recalled. “But he ran it as a business and took care of his family racing for a living, back when you could do that. My mom and dad did all of his own publicity; I remember we shot a lot of those publicity photos in our driveway.” 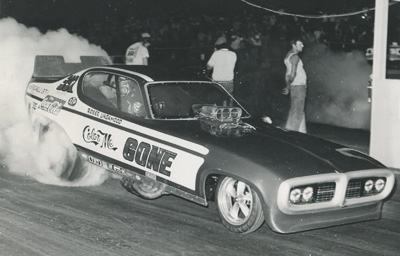 Primary to Lindamood’s success in the 1970s was his long participation in the Coca-Cola Cavalcade of Stars circuit which he first joined in 1972. Son Randy remembers those days fondly, and the non-stop action and camaraderie of the traveling band of nitro gypsies.

“I remember June 1976, when we ran 25 or 26 races that month,” he said. “We might run Detroit Dragway on a Tuesday, then Wednesday was US30, then Motor City on Friday and the Coke deal was a Saturday and Sunday at whichever track was next. It just worked out perfect. 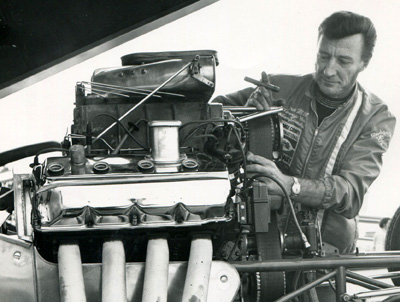 “It was a cool deal, to travel around with the same guys, like Dale Creasy and Dick Bourgeois and Fred Goeske. It was quite a cast of characters. I look back on it now and realize it’s just something that will never happen again. I’m just really thankful to have been part of it. At the time we didn’t think much of it, it was just your job to go make money, but looking back on it now, wow, we were lucky to have been able to do that.

“Most of the races were close to home, so we could go home between races, service it, and go to the next track. You couldn’t do that on the East Coast races and we had one Western trip we’d make each year in the summertime, run Denver and Portland, Seattle, Fremont, then Irwindale, Orange County and head home. It was all booked so you could do it weekend to weekend.” 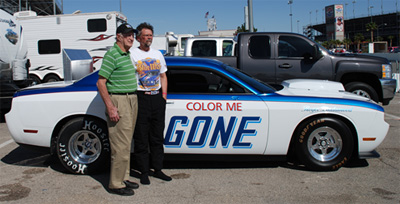 As the cost of racing increased, Lindamood made the tough decision to quit around 1979. In the mid-1990s, father and son built a ’64 Dodge Polara version of Color Me Gone that they ran at a number of events and, more recently, built a modern-era DragPak version of Color Me Gone, powered by a Gen 2 Hemi than would run 9.0s at 150 mph.

A stroke in 2015 slowed the senior Lindamood, who still enjoyed going to Mopar events, where he was remembered and saluted by the faithful who remembered him, as we do this week.

Color him gone, but not forgotten.