How ‘bout them Capco boys? That was a refrain that NHRA fans heard a lot in 2018 from the lips and heart of the eventual Top Fuel champion Steve Torrence over the course of a glorious 11-win season that culminated in an historic six-race sweep of the Countdown to the Championship playoffs.
29 Dec 2018
Phil Burgess, NHRA National Dragster Editor
Feature

How ‘bout them Capco boys?

That was a refrain that NHRA fans heard a lot in 2018 from the lips and heart of the eventual Top Fuel champion Steve Torrence over the course of a glorious 11-win season that culminated in an historic six-race sweep of the Countdown to the Championship playoffs. It was a salute not only to his crew — the black-and-white-shirted posse led by Richard Hogan, Bobby Lagana Jr., and Justin Crosslin — as much as it was the support from the entire family-owned Capco Contractors organization that funds the race team, from his parents Billy and “Mama Kay” all the way down to the hundreds of employees he knows by name who cheer on the team from its Kilgore, Texas, base. 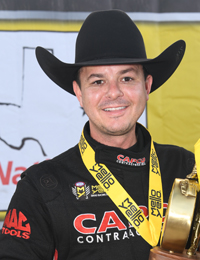 Torrence is as Texas as they come, as Texas as the cowboy hats and boots he favors, and with a heart and dedication as big and wide as the Lone Star State itself. The homespun homilies flow like Texas black gold from the ground — “The sun don’t shine on the same dog every day,” and “You can’t clear the forest if you don’t do it one tree at a time,” or “He’s as tricky as a rubber crutch.” — that help keep their well-oiled machine running and the team motivated.

The Capco team entered the 2018 season motivated, and no one more than Torrence himself. Still a bit bitter over the fate of his 2017 campaign, where he led the points until a late-season, car-destroying crash derailed their bid, 2018 was quickly dubbed by outsiders — and embraced by the team — as “the redemption tour.”

It started off a little rocky, with a double-step red-light in the second round of the season opener in Pomona and a centerline violation in round one in Gainesville sandwiched around a victory in Phoenix, but then the Capco Express got rolling.

“It really took me a couple of races to get my head right,” Torrence admitted. “I still was a little resentful and pissed off about how things happened last year, and it took me a few races to put it in the past. Phoenix was a fun race, getting to race my dad in the semifinals and then getting to race [quasi teammate Scott] Palmer in the final. It was an eye opener for me to just get my head right and have a good time. I had a different perspective after that.” 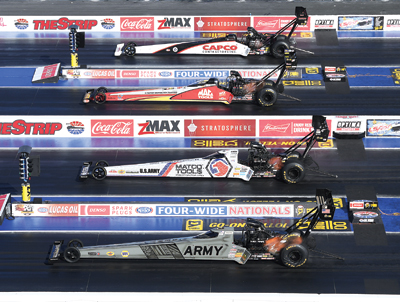 With the Phoenix win, Torrence took over the points lead he would never relinquish then went on to win both of the four-wide events, the return to Richmond, and in Epping, losing only once in the first round, in Chicago. Redemption was in full swing, but no one was celebrating yet.

The Dallas crash had exposed to the team a weakness in disaster preparedness, but they countered this season by introducing a new car during the three-race Western Swing. They sent their primary car back to Morgan Lucas Racing to be front-halved then spent the Swing putting laps on the second car so that if they did ever have to pull it out of the rafters, it would be ready. With the completion of the Swing, the second car went back into the trailer, fully tested and ready for action if needed.

“A lot of people talked about this being a season of redemption for us, and it motivated us for sure, but more than that, we all had a different mindset, as far as the focus and the comfort of being in that situation. I think that you have to learn how to win a race, and I think that winning a championship is the same thing. Last year was like a trial by fire; we had the wreck, and we weren’t able to recover as quickly as we needed to, but I think if that had happened this year, it would be a completely different outcome.” 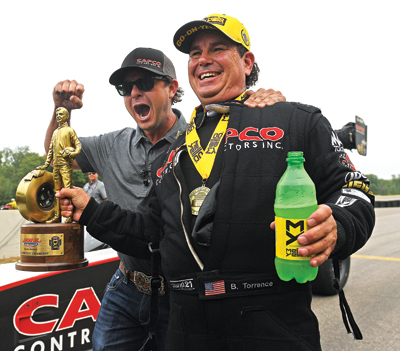 Even though Torrence would not win a race from Epping through Indy, he and the team were delighted when father Billy won Top Fuel in Brainerd, beating Antron Brown on a final-round holeshot.

“That was one of the biggest moments of my racing career,” said Steve. “I was so proud of him. You can buy the parts, you can hire the people, you can do everything with money, but you can’t win, but when you go up there and beat the three-time champion on a holeshot in the final round, that’s just driving.”

With expectations high, Torrence entered the Countdown as the No. 1 seed by cracking a joke, pointing out that if only he could just win every round, the points would take care of themselves. He had no idea he and his team were about to do just that, but it spoke volumes to his confidence.

“We told ourselves, let’s go win this round, then let’s go win the next round and break everything down into small pieces,” he said. “It was about just being ready for anything, and we were better prepared mentally.” 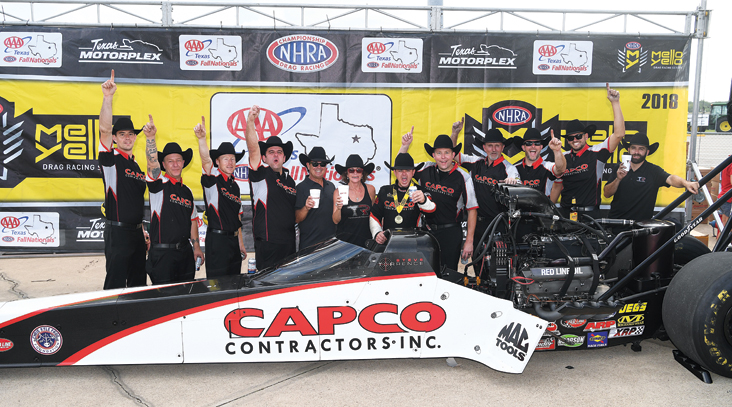 The team won the Countdown opener in Reading, but it was by the thinnest of margins, beating Mike Salinas by just .003-second in round two and Clay Millican by just .001 in the semi’s before defeating Tony Schumacher in the final. A few thousandths here and there and the “perfect Countdown” would have been over before it really started. From there though, “them Capco boys” blew the championship race wide open with wins in St. Louis and Dallas, the latter being the first win in Torrence’s homestate since his 2005 championship season in Top Alcohol Dragster and allowed him to finally and fully put the accident behind him.

“I went [to Texas Motorplex] earlier in the year in my dad’s Super Comp car at the divisional event, and even though I got back in the car after the wreck and made that next lap, I was running 100 percent on adrenaline — 10-foot tall and bulletproof and nothing can scare you — when I looked at that burnout box and I was in the left lane like last time, I thought, ‘This is terrible.’ But I was able to get the monkey off my back there, so when we rolled in there for the [national event], it was good. That was a big race for us.”

With a perfect score halfway through the Countdown, Torrence took the occasion to address the team as they prepared for battle in Charlotte.

“I told them. ‘No matter what happens from this point forward, we won the first three races, so take a step back and look at what we’ve accomplished as a team. No matter the outcome of this Countdown, be proud of what we’re doing because no one has done this.”

They went on to win Charlotte, then clinched the championship in Las Vegas with their fifth straight win, leaving only the season finale in Pomona between them and immortality. 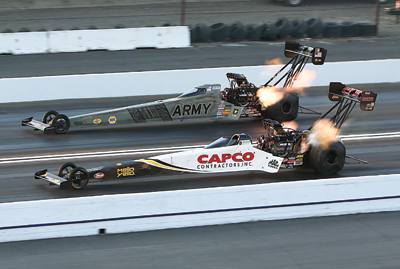 “I don’t think that any of us really put a whole lot of stock into sweeping the Countdown,” he said. “That wasn’t what was motivating us. That was just a byproduct of trying to win the championship. I didn’t really think about that seriously until Vegas, so going into Pomona there was a little bit of nervousness because I started thinking about what if and what could be.”

Torrence mowed his way through the four rounds Sunday at the Finals, beating Cameron Ferre, his father Billy again, Brittany Force, and Schumacher again to complete the once-unthinkable accomplishment of going undefeated through the playoffs.

“I don’t think that not sweeping the Countdown wouldn’t have taken any shine off winning the championship, but I’m here to tell you that doing it put a lot of shine on it,” he said. “But no matter what happens from this point on, I’m always gonna be the 2018 Top Fuel world champion, and I’m always gonna be the first person ever to sweep the Countdown. I would like to think that it probably will never be done again. If it does, I want to be the one doing it again.”