J.R. Todd and the DHL Toyota Camry team took down an incredible Funny Car class to assert himself as one of the best in the business.
28 Dec 2018
Jacob Sundstrom, NHRA National Dragster Associate Editor
Feature

If there’s a surprise about J.R. Todd’s first championship, it’s that it came in a short-wheelbase car. When the Indiana-born racer first made waves in NHRA Drag Racing, it was inside of a Top Fuel dragster. The 2018 Funny Car champion reached the promised land thanks to team owner Connie Kalitta putting together crew chiefs Jon Oberhofer and Todd Smith and J.R. Todd with the right car — so, not too different from most championship stories.

Still, receiving the championship jacket for the first time as a Funny Car driver took Todd by surprise. While still one of the youngest drivers in the flopper category, he’s a seasoned racer in the NHRA Mello Yello Drag Racing Series. Todd broke into the Professional ranks as a 25-year-old by driving the Skull Shine Top Fuel dragster and quickly found success, winning three times. 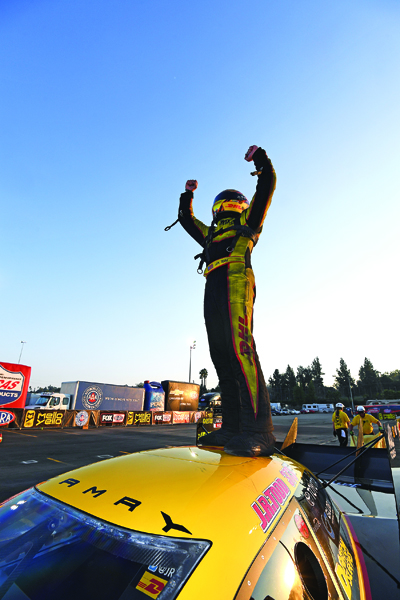 “I feel like I’ve been racing forever, but at the same time, I still consider myself one of the younger guys out here,” said Todd. “I always thought it would be in a Top Fuel dragster though, I’ve never really considered myself a Funny Car guy.”
That might change now. Todd now boasts eight Funny Car wins compared to nine in a Top Fuel dragster. It took him only 48 races to accomplish the former, compared to 152 for the latter. The percentages speak for themselves, though it’s worth noting the racer has never had the privilege of piloting a car as good, nor with a crew as talented as the one he has worked with the past two seasons.

Todd earned one win in each of his three seasons driving a dragster for Kalitta Motorsports, beginning in 2014. He was top five in the class in reaction time every year and immediately transferred that skill to Funny Car, despite the process being not-so-transferrable. That helped bring the second Funny Car world championship to Connie Kalitta and the first since Del Worsham powered to a title in 2015.

A .067-second reaction-time average put Todd just behind Cruz Pedregon for the reaction-time lead (by ten-thousandths of a second, to boot) in just his second year driving a Funny Car.

“The less you think about it, the better you’re gonna be as a driver, I think that’s really helped with my reaction times,” said Todd. “I just can’t go up there scared or second guessing myself behind the wheel. What I need to do out there, and it’s an ongoing challenge because when you think you have a good handle on it as a driver the car will reach out and show you it’s boss, that’s for sure.”

A combination of a great driver and one of the best cars made sure the DHL Toyota Camry reached at least the semifinals in every race from the Chevrolet Performance U.S. Nationals forward. That took Todd from a fifth-place Countdown to the Championship start to the podium.

That’s the longest dash to a title in Funny Car since Matt Hagan went from seventh to Heaven in 2014. Todd won three times during the regular season, including taking the crown at the U.S. Nationals, before winning the seemingly requisite three times in the Countdown. The victory at the Auto Club NHRA Finals became the cherry on top of an incredible season — he clinched his title in the first round when Robert Hight smoked the tires against Bob Tasca III, but Todd wasn’t done yet. 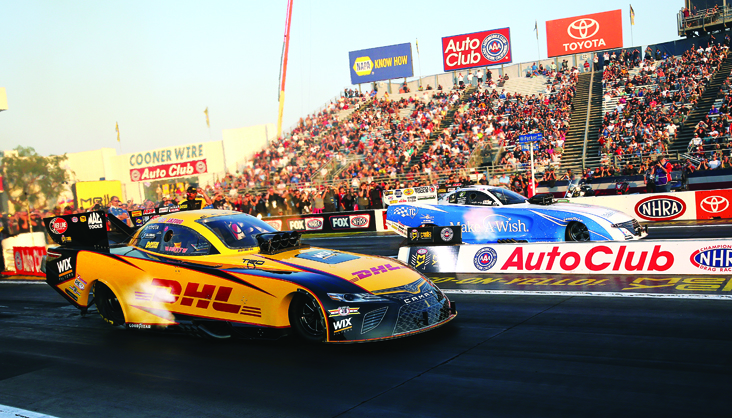 “People kept asking me all weekend what we needed to do to clinch, and it was honestly starting to piss me off,” said Todd. “I just said we needed to win the race, and everything would take care of itself. I didn’t want to get caught up thinking about point stuff or scenarios or anything like that.”

Todd stacks up against the most competitive drivers in NHRA Drag Racing. Every driver shows up to win, naturally, but the fire Todd exhibits on a race-to-race basis is far from performative. That’s emblematic of the entire Kalitta Motorsports organization, which races as hard as it celebrates — and if you’ve watched any racing this year, you know it does both hard.

“Whenever a team has a down weekend, you go help them and pitch in on their car, whoever is still in competition,” said Todd. “So, no one really gets super down on themselves, and it was awesome to be able to win for them. Those guys work really hard and everybody gets a big piece of data or a piece of that big bonus check. So that’ll put a smile on everyone’s face.”

Beyond the organization support, Todd races with some of the most individually talented drivers in the class. Shawn Langdon is a multitime world champion who made the switch to Funny Car this season, and both Doug Kalitta and Richie Crampton regularly top the charts in reaction-time average in Top Fuel. 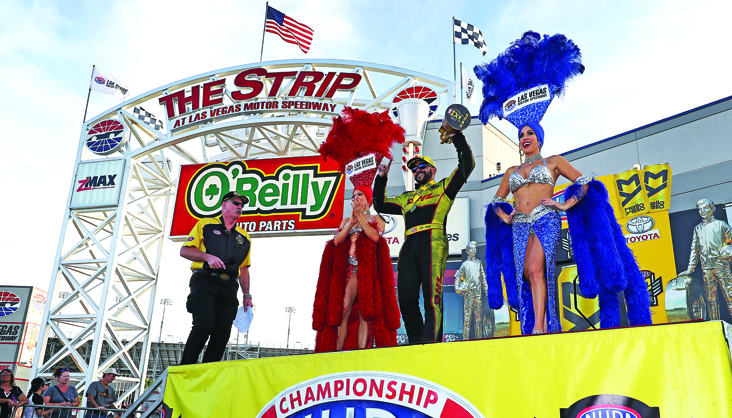 “I’ve never been a part of any organization like that, where you’ve got drivers that you can lean on like that,” said Todd. “We’re always asking each other for advice for things we think we’re struggling on. There are no secrets between us. I mean, man, we all go out there and want to kick-ass, so we do whatever it takes to make each other better.”

Perhaps most striking about Todd’s season is there’s still room to improve. Nearly every Funny Car driver will tell you there’s room to grow, but the DHL Toyota Camry team’s program hit a new level midway through the season. If Smith and Oberhofer continue to build on that when the Winternationals come around, look out.

There hasn’t been a repeat champion in Funny Car since John Force went back to back in 2001 and 2002. That’s, in part, because of how brutally difficult the category is — and it’s not going to get any easier in 2019. But after two full seasons in the seat of a Funny Car, Todd made his mark as one of the best young drivers in the category and has a car capable of breaking one of the longest streaks in the sport. The Yella Fellas will have a lot of competition next season — but they’ll be ready.