The upcoming Summernationals is one of the NHRA's most iconic events, with a deep and rich history. Step back into time 40 years ago for one fan's photographic memories of the event.
02 Jun 2017
Phil Burgess, NHRA National Dragster Editor
DRAGSTER Insider

Working at National Dragster affords me incredible access to decades and decades worth of photos in our vast image library dating back to NHRA’s earliest days. As you can imagine for a drag racing nut like me, it’s heaven. There are iconic photos that are indelibly etched into my memory from seeing them in National Dragster or the monthly mags and now I can hold them in my hand and look at them in new ways.

As much as I love that, I sometimes get an even bigger thrill from seeing previously unpublished photos that come from the residents of the Insider Nation. I know I’ve expressed this before, but it’s like getting taken on a tour of someone else’s racing experience. Not everyone sees or looks for the same thing, or absorbs the experience in the same way. While you’d have to tie me to a chair to look at someone else’s vacation photos, when it comes to looking sat someone else’s drag photos, I’m all in, which is why I wasted to time replying to column reader John Guzevich when he offered to share his Summernationals memories with me.

Not only are they cool, but with the Summernationals coming up, and his images from (mostly) the ’77 event – 40 years ago! – how could I resist? He sent me roughly 40 images, so this will be a two-parter. (For the record, some of the images below are cropped and/or color-corrected by me for presentation purposes.)

They're mostly pit-area shots, but it brings me back to my early days at the races. The first thing I'd do was cruise the pits to see who was here, then, a bit in awe, shoot some photos of these gods from a respectful distance. That's the same vibe I get from John's work, as you will see. 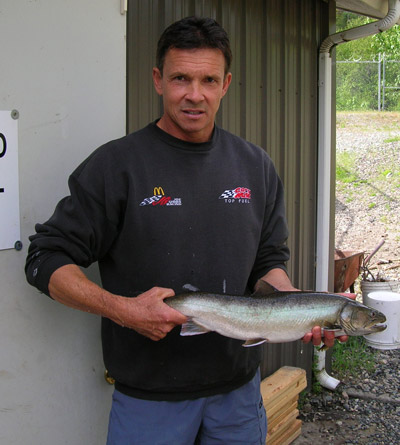 But first, a little background on our guest columnist. Guzevich grew up in New Jersey and attended a number of Summernationals events in themed- to late-1970s. Right after high school, he moved west to attend the University of Wyoming in Laramie, where he majored in Wildlife Conservation. During the summer I would move back to New Jersey to work and live with his parents, saving money to return to school, and he and his friends would hitchhike to the drag races.

After receiving a Bachelor of Science degree in Fisheries Management and working for the Wyoming and Colorado Game and Fish Departments for five years, he returned to school and earned a Master of Science in Fisheries Management from Montana State University. Since then he’s  been employed as a Fisheries Biologist with the U.S. Forest Service in Boise, Idaho for 25 years and is a regular at Firebird Raceway and attend national events mostly in the western U.S. -- Denver, Phoenix, Seattle, Sonoma, Pomona, Las Vegas, and Dallas – but still returns to Englishtown from time to time and meet up with the same buddies that were there when he took these photos.

So climb into our Summernationals Time Machine, set the dial to 1977, and … away we go. All comments provided by the photographer. 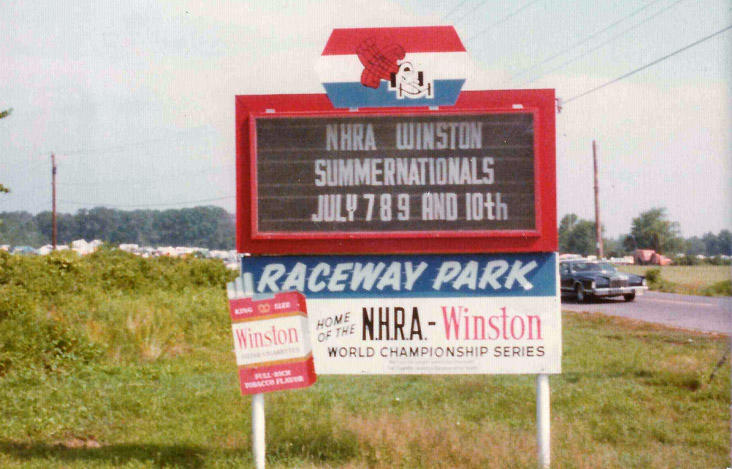 To start: the entrance to Raceway Park back in “the Winston’ Days” and in July … the heat, the New Jersey humidity! But the sights and sounds of those drag racing icons: “Snake,” “Jungle,” Shirley, Jenkins, etc., made it memorable! 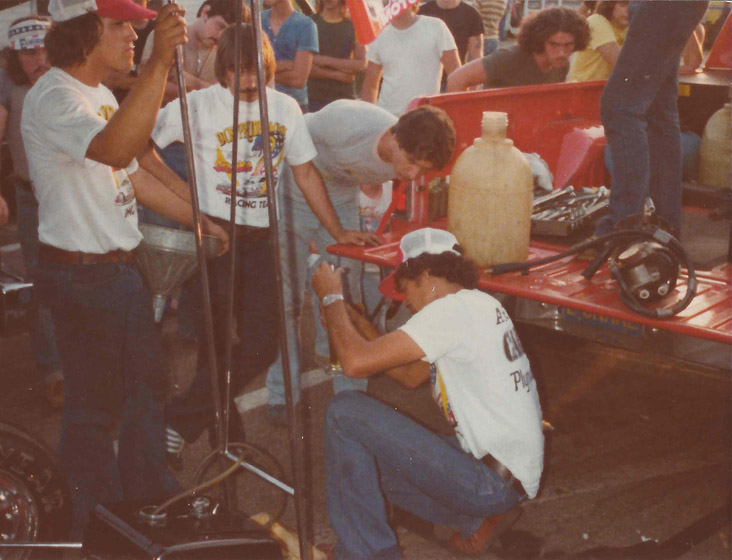 Roaming through the pits and staging lanes we were in awe of how close you could get. That is Don Prudhomme setting the nitro mix in the lanes just before a qualifying run with trusty Bob Brandt looking on. 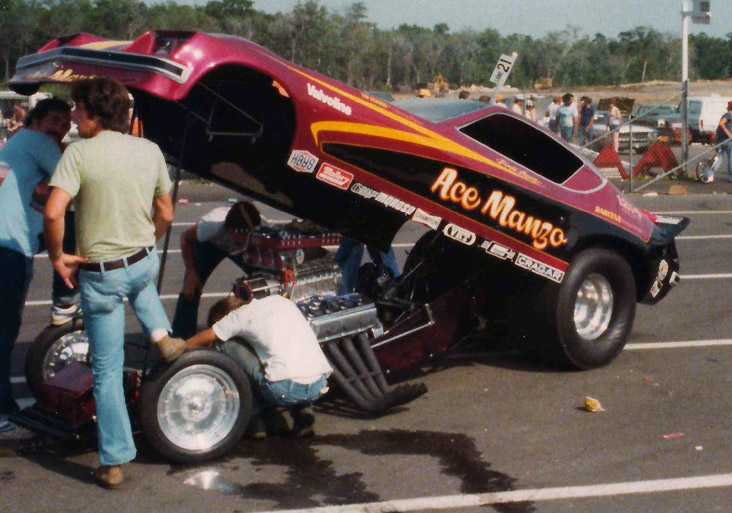 That’s fellow Jerseyite Frank “Ace” Manzo and his Monza BB/FC, who would have thought he go on to sooo many championships. 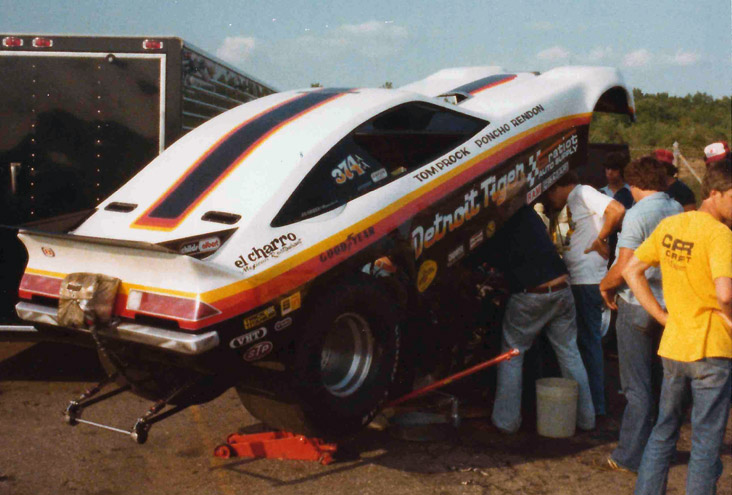 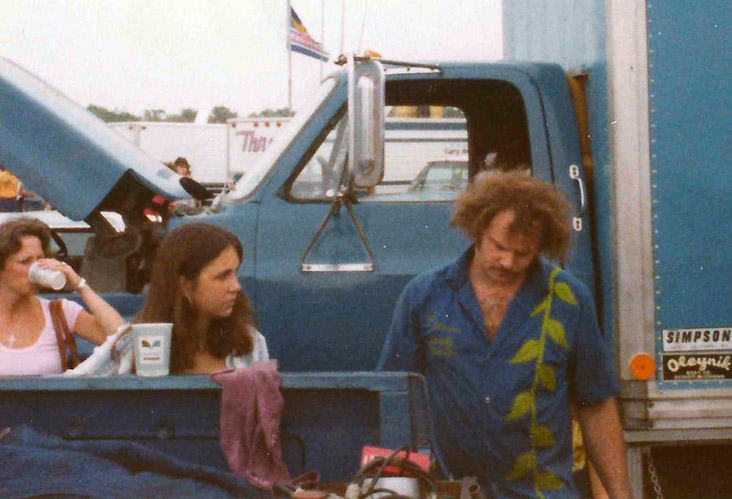 We noticed the powerful and popular “Jungle Jim” not having a good weekend and we could see the struggle written on his face. 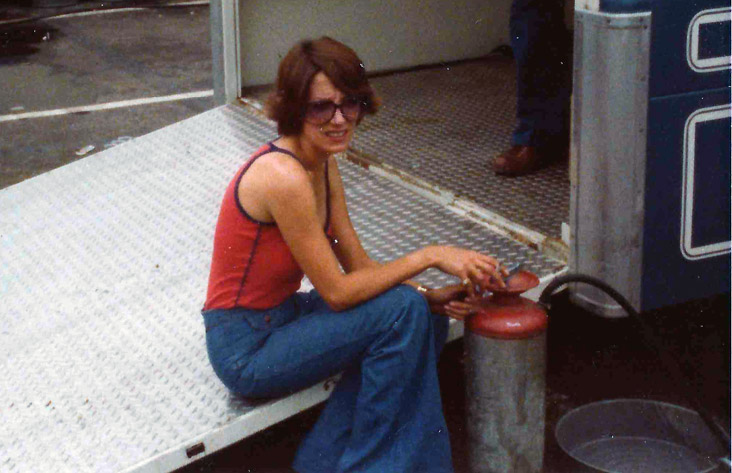 Here’s Shirley Muldowney enjoying a quiet moment with a smoke on the ramp door of the Candies and Hughes Top Fueler. 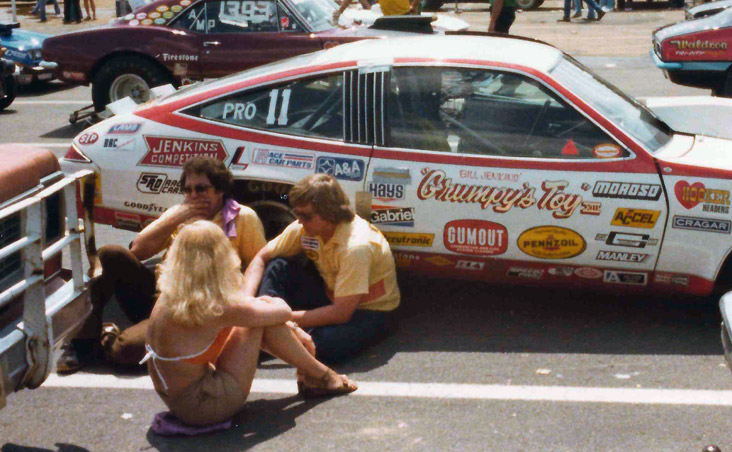 Wandering through all the machinery in the lanes (back before qualifying sessions) we saw Larry Lombardo seeking some shade alongside Bill Jenkins’ Monza Pro Stocker before his turn to make a pass. 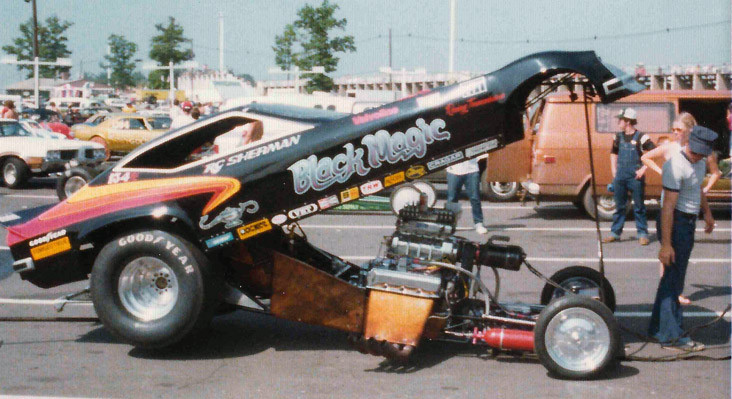 Wandering the lanes on a Saturday morning, we see “TV Tommy” Ivo and his Rod Shop Dodge AA/FC; next we have an East Coast regular, the Black Magic AA/FC of R C Sherman. 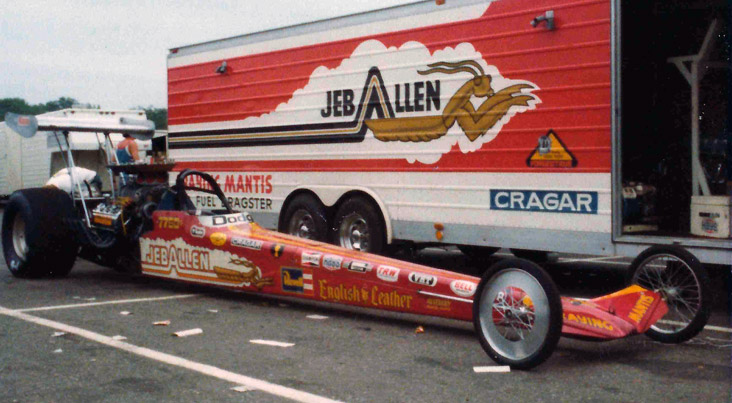 Over in the pits we got close to an Englishtown hero, Jeb Allen and the Praying Mantis Top Fueler; a few years back a kid from California won the Summernationals just after high school! Wow, even us East Coast fools knew who he was.

Then, at our favorite spot, the bleach box, here comes reigning world champ Richard Tharp in the Candies and Hughes Top Fueler alongside another champion, Gary Beck. From this vantage point, we didn’t care about e.t. -- it was all about the thunder of fuel motors, the smell of burnt rubber, and a whiff of that sweet nitro! What did they run? We couldn’t see. Hey, here comes the next pair! We were immersed in smoke, burnt rubber, sounds, and nitro. 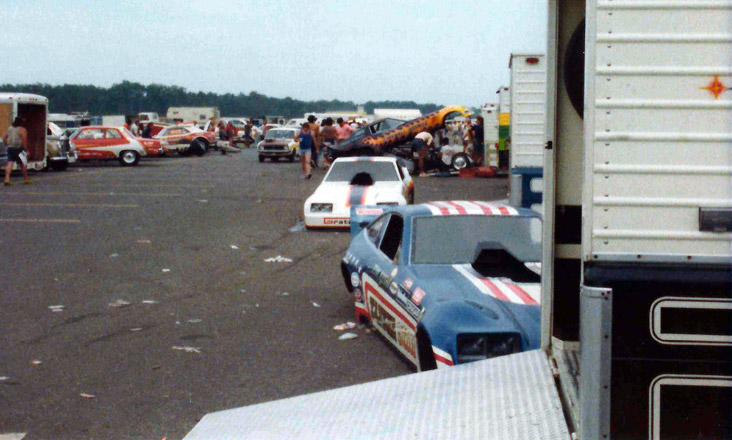 The pits at the Summernationals were filled with Funny Cars, bodies strewn about, and we loved it. This shows the Fireball Monza, Tim Kushi and the Yankee Sizzler, and the Detroit Tiger. Those we not the regular floppers we’d see at those Wednesday Night Funny Car shows at Englishtown, this was special. This was  … the Summernationals! The next row over of dualie pickups with sleepers and Chaparral trailers was more of the same. 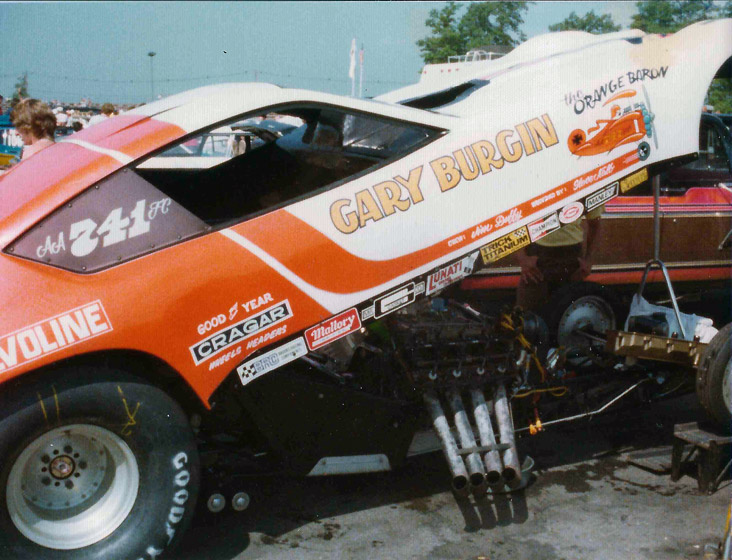 The Orange Baron AA/FC, Gary Burgin from California was a long way from home in New Jersey, but we were tickled he was here! A hard-running car and former US Nationals Champion, he was a regular at those Funny Car shows. 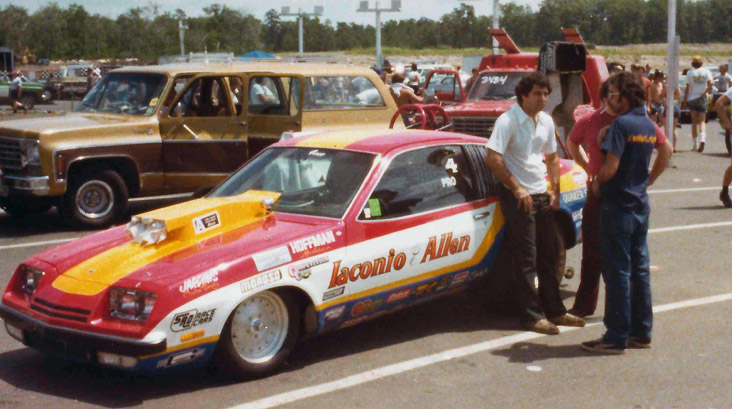 Not to be a fuel car snob, we looked over the Pro Stock cars, and another fellow Jerseyite, Frank Iaconio, and his Monza in the lanes. 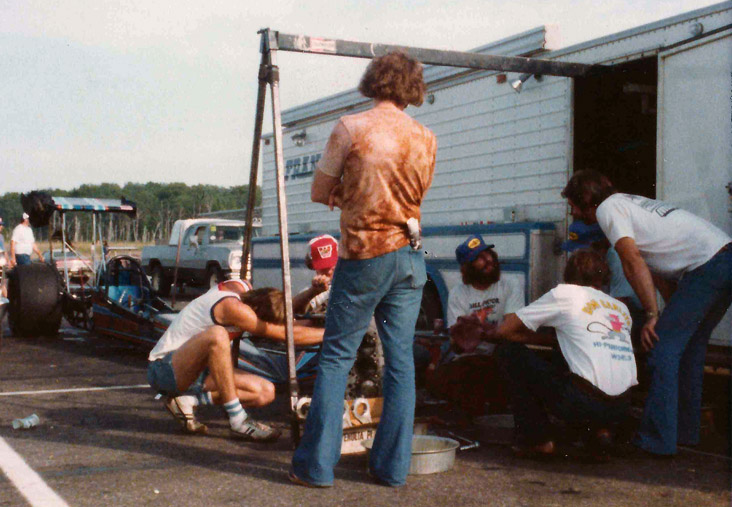 Frank Bradley, a regular on the NHRA tour, all the way from California. Wow, gotta know that “Beard.” 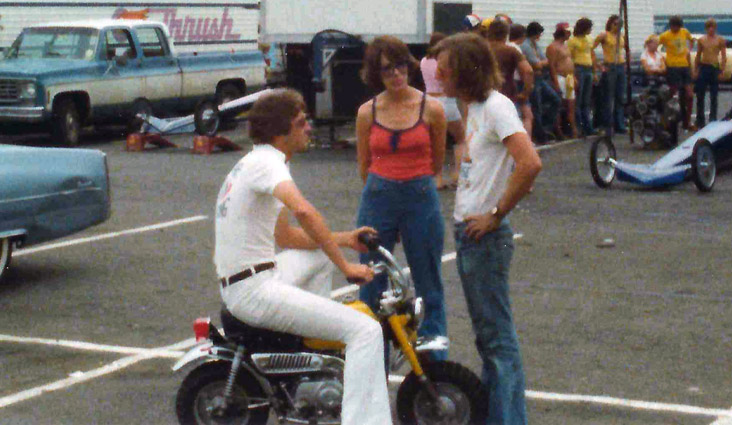 Early on a Saturday, there was Shirley and TV Tommy Ivo chatting with a track official. Racers were everywhere; we had seen them in magazines, and there they were --we were “not worthy” to go up and talk to them. Autograph? That wasn’t the protocol of that era, not like today. 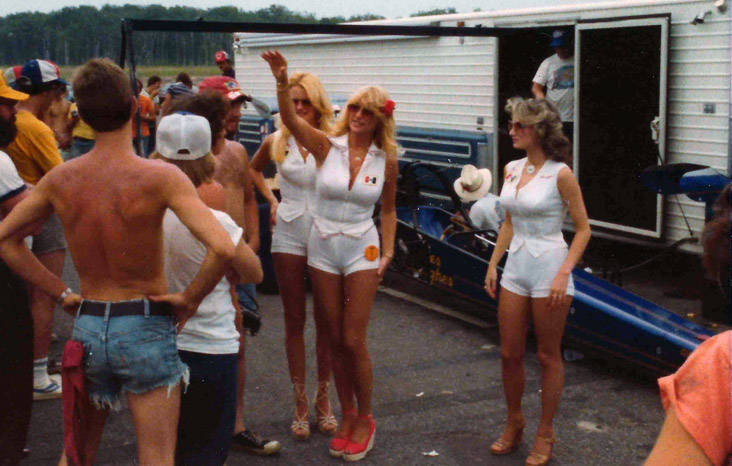 Another drag racing icon, Linda Vaughn, Miss Hurst, and the Hurst ladies, strolling the pits. We couldn’t believe it -- there they were. 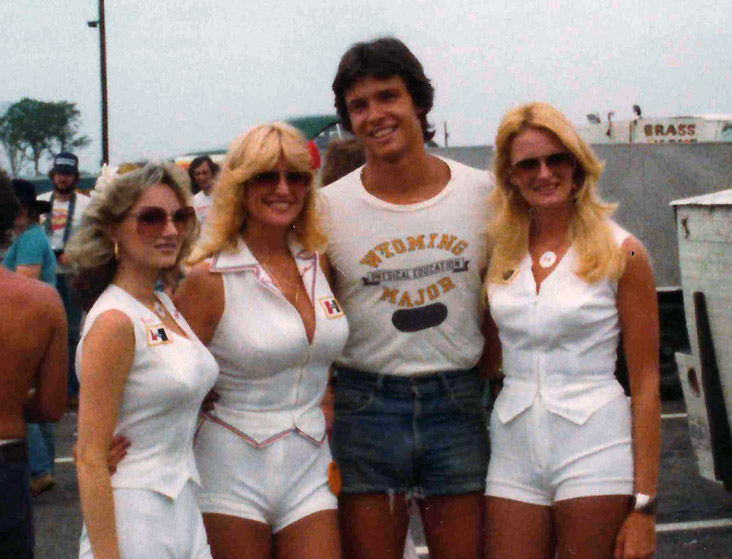 Sometimes, a lucky college kid gets a chance of a lifetime, that’s me, Johnny G., with Linda Vaughn and the Hurst ladies.

I hope you enjoy these images from a storied raceway and a storied event as much as I have had sending them to you and reliving them.