Remembering Pat Minick and the legend of the Chi-Town Hustler

The passing of Pat Minick, original driver of the famed Chi-Town Hustler Funny Car, on Thursday took me by surprise and saddened me in the way that I mourn the loss of the pioneers of our sport. The heroes that I grew up reading about on the pages of National Dragster and the monthly mags continue to head off to the great dragstrip in the sky, leaving behind the legacies they built and the memories they created for all of us.

I know it’s inevitable that will continue to happen – the natural progression of life that ultimately will claim us all – but with each loss, the profoundness grows. New heroes have and will continue to emerge from today’s racers but I know that for many of us the “old-timers” are the ones we will always revere more deeply and mourn more passionately.

Much as the deeply-laid rubber tracks and smoke-clouded starting line that announced the appearance of the Chi-Town Hustler at tracks far and wide, big and small, Minick’s legacy will be forever part of our memory.

With John Farkonas and Austin Coil, Minick made the tire-smoking burnout not just part of the pre-run ritual of cleaning the tires but an essential part of the act and one that helped cement the car’s place in our hearts. 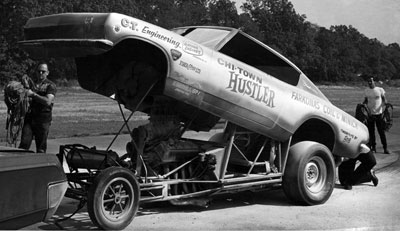 Farkonas and Minick were both Mopar guys when they met in the late 1950s and first partnered in the early 1960s, with Minick wheeling several of Farkonas’ cars, starting with a ’56 Chrysler 300. In 1962, they went Super Stock racing, winning 31 of 33 events they entered. In 1964, they got backing from Norm Kraus’ Grand Spaulding Dodge dealership with a car that was known as the Hustler (not yet with the Chi-Town prefix) and, finally, a blown-nitro altered-wheelbase ’65 Plymouth. Farkonas and Minick got their clutches done at E&R Automotive, on Chicago’s north side, where Coil was also a customer, struggling to race a 426 Hemi-powered Super Stocker on an auto-dealer mechanic’s wage. Farkonas and Minick were in need of a good wrench, and Coil was in need of some deeper pockets, so they formed a partnership during the winter of 1966 and decided to go Funny Car racing in 1967. The trio built a tube-chassis ’67 Barracuda flip-top Funny Car in the garage of Farkonas’ mother that was the first Chi-Town Hustler (Minick had come up with the idea of branding the car as being from Chicago a year earlier, but it didn’t go onto the car until 1967).

Minick only drove the car for four seasons, from 1967 into 1971, and even though Frank Hawley drove the Hustler to unprecedented successes in the early 1980s, he’s the first to admit that it was always Minick’s car.

“Even though he only drove the car four years, if someone had asked me, I would have said he drove it for 10, because in spite of the fact that the Chi-Town Hustler had so many drivers I don’t think that any of us figuratively owned the car like Pat Minick,” Hawley told me yesterday. “The burnouts, the show, the car, the name. It was all Pat Minick. He started it all, and as long as that car ran, it was all about Pat and how he and Austin and John Farkonas started it all. I was just a kid with photos of his car on my bedroom walls – a fan. He was a legend. I thought it was cool just to meet him, let alone interview for the chance to drive his racecar and then drive it. I just have unbelievable memories of our time together, and when I heard about his passing, they all just flooded back.”

(Hawley also shared with me the incredibly funny story of how he got the job driving the Hustler in 1980; I’ll share that next week.)

I also spoke with Coil about his longtime friend. After the passing of Farkonas in August 2014, he’s the lone survivor of the three amigos who started it all. Coil was the youngest of the trio, eight years younger than Minick and 15 years younger than Farkonas. Like Hawley, Coil heaped more praise upon Minick’s efforts than his own regardless of the level of success.

“Pat was probably one of the reasons the Chi-Town Hustler was a success in the early days,” Coil said. “In those early days, I don’t think we had anything that was particularly better than what everyone else had, except for Pat’s right foot. In those days, we all had Torqueflite transmissions and nothing that would control whether it smoked the tires or not except for a driver’s skillful use of the throttle foot. With all of that gear reduction, it would smoke the tires with provocation. Pat was very good at controlling that, and that was the reason we had some good early success. Without him we’d probably never have turned professional."

And, of course, there’s the all-too-significant burnout element that made the Hustler stand out.

“A lot of guys would try to do long burnouts, but Pat was one of the few who could do it without damaging the engine in the process,” recalled Coil. “Many, many others who tried to make more smoke would end up hurting it on the burnout. Of all the times we raced, I don’t ever remember him over-revving the engine. He had a real good touch.”

The first one, as Coil recalls, was on a slippery eighth-mile track in Springfield, Ill., in 1969, in an attempt to improve traction. 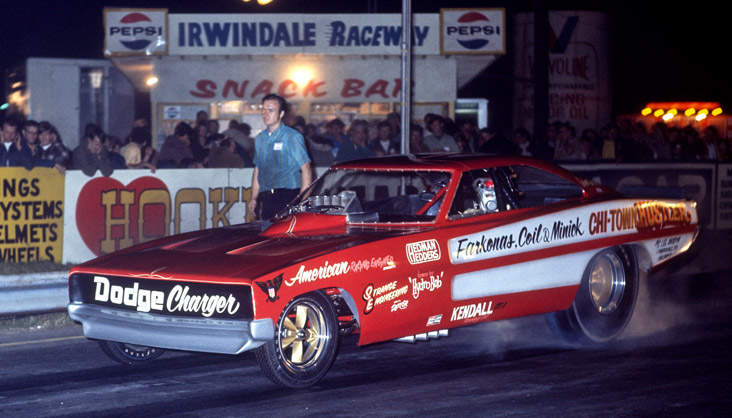 “It didn’t hurt anything and the crowd absolutely went crazy,” Coil recalls. “That was a Saturday night race and when we showed up the next morning in Rockford, Ill. [track owner] Ron Leek came running out and said, ‘I heard about the burnouts! You have do them here, too.’ That’s how it all began.

“Pat also managed the business, and got all of the bookings for the car that kept the team going. He even chose his own successor. One day Clare Sanders walked into our shop and I said ‘Hey Clare, good to see you. What’s up?’ and he said, ‘I’m driving your car next week.’ If Pat had to quit, we were very happy to have Clare, so he did a favor there because Clare did a good job for us.”

Although he continued to run the business side of the operation, Minick didn’t come to the races beyond those that were relatively local, and Farkonas had stopped coming after he got married in 1969, so Coil soldiered on with a variety of drivers, helping keep the name alive up through his departure to join John Force Racing, which included the creation of the multi-car Team Strange that funded the team in 1983 and ’84.

“Even though I didn’t see Pat as much anymore – I’d see him whenever I got to Chicago – we talked a lot on the phone; I loved talking to him because he was such a great storyteller,” recalled Coil. “I’m going to miss talking to him.”

I also got a chance to chat with Minick’s son, Wayne (pictured at right with Coil in 1983), who took over the controls of the car after both Hawley and Coil left the team. He drove the car for a few years and now has the pleasure of watching his son, Mike, drive the newest Hustler on the Nostalgia Funny Car circuit.

“My dad was my hero,” he said. “I was just a teenager when he was driving and I got to go the track with them – not as much as I would have liked too, of course, with school and everything – and watch him do his thing. I was a fun time, and the chance to drive the car that he had made famous, and the chance for my son to also drive, it almost more than a guy could expect. Three generations of driving Chi-Town Hustler is an amazing thing. He was a good man who loved his family.

“When Hawley left and Coil left, I wanted to keep it alive. It was very much in the air. Coil didn’t know how long he was going to work for Force – maybe just a year – but he told me when he left that I should learn how to drive the car and maybe when he came back we’d go racing. That never happened for me, but I was proud to carry on the name. We tried to do it the best we could; we never were as successful as we would have liked, but I think I at least did pretty good burnouts. What I hated the most was calling home and telling him why we sucked so bad. Still, I know he was proud that we carried on the name and enjoyed the fact that we were out there racing.”

Whether it’s in a museum, a scrapbook, a memory, or on the racetrack, the Chi-Town Hustler name will live on for as long as we’re all talking about drag racing. Thanks, Pat Minick. You’ll be missed.

On a side note, I've already heard from a number of who trying to find this column in the new-look NHRA.com layout. I know it's different, but here's a few pointers.

When the column goes live Friday mornings (traditionally right after midnight), you can find a link to it on the left-hand side of the home page, under Latest News. Also, as soon as I can each Friday, I will add a link in the Daily Columns portion of the home page (in the center "Featured" column); this is not automated yet, but I hope it will be soon. Third, you can always find it at it's "home page, located here, which also will give you links to older columns. Forgive the missing images and bad layouts of previous columns. There's still some housekeeping to be done.

Hopefully this will become more familiar to do. I know the new site is much different than the old one, but I'll do my best job to make it just as comfortable.