Sure, Top Fuel racer “Gentleman Hank” Johnson, who died earlier this week, was part of the answer to a great trivia question, but in a career that spanned more than two decades, he was much more than that.
14 Apr 2017
Phil Burgess, NHRA National Dragster Editor
DRAGSTER Insider 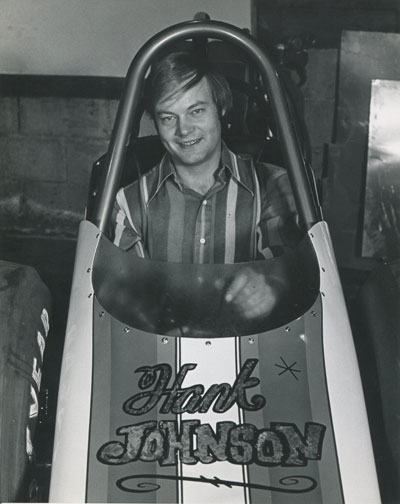 What does “Gentleman Hank” Johnson, one of the Northwest’s best Top Fuel and Funny Car racers, have in common with fellow 1970s Top Fuel racers Bob Gibson and Gary Beck? Or with ‘70s Pro Stock hero Larry Lombardo? Or with modern-day nitro gladiators K.C. Spurlock, Gary Scelzi, and Darrell Russell?

It may just sound like a trivial footnote to an incredible career and a life that ended last Sunday, but Johnson was one of just seven drivers credited with a win in his NHRA national debut, that coming at the 1971 Supernationals.

It’s one of those weird stats because by the time that Johnson and partner Jim Dailey parked their slingshot in the Ontario Motor Speedway winner’s circle after defeating John Wiebe in the final round, he’d already been racing Top Fuelers for seven years on the West Coast, just never at an NHRA national event. He raced for another 15 years – in Top Fuel and both nitro and Alcohol Funny Car – before retiring, winning again in the latter at the Winternationals in 1983.

Johnson was still in high school in Marysville, Wash. – his lifelong home – when he got the drag racing bug. At age 14 he bought a ‘39 Chevy coupe from a farmer for $35 and spent the next few years working on it before competing at his first race, in 1963, at Arlington Drag Strip. That car led to a longtime partnership with Dailey that began with a B/Gas Willys, competing against the likes of Jerry Ruth and Dick Kalivoda, and before long – as you could do back then -- he was behind the wheel of a Chevy-powered Top Fueler.

Johnson and Dailey flogged their little Chevy-powered rail and did pretty well -- as Chevys could do against the more powerful but tire-smoke-prone Chrysler machines -- but as tire technology improved in the 1967 season, they quickly found out they didn’t have the power to pull the new wrinkle-wall rubber and hang with the era’s top guns, and blew up a lot of equipment trying to.

In ’68, they switched to 392 Chrysler power and enjoyed better success, eventually running as quick as 6.68 at 228 mph. They then commissioned famed Southern California chassis builder Don Long to build them a more-modern slingshot dragster, added a late-model 426 Hemi, and set about trying to conquer the world. 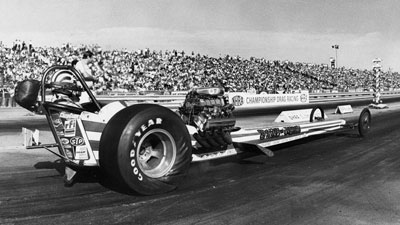 “That car was a little different from what everybody else was doing at the time,” Johnson told National Dragster in a 1984 interview. “It had a quick-change rear end, two-speed transmission, and a bunch of things that were a little bit out of the ordinary. The motor was out quite a bit further than what everybody was doing at the time. The car ran great but we couldn’t win a damn race with it.”

The car set track records everywhere they went in 1971, but Johnson still had difficulty reaching the winner’s circle, either because the car or the driver just wasn’t consistent. It wasn’t until they designed in an adjustable feature to the clutch pedal that things turned around. 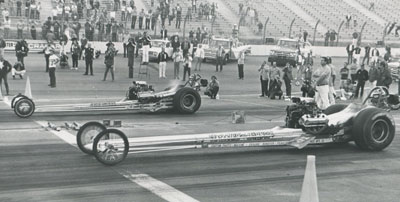 Johnson and Dailey were runner-ups behind Don Garlits at the AHRA World Finals at Northern California’s Fremont Raceway, then continued their southward trek to Ontario, where they qualified No. 1 behind Wiebe’s all-new Donovan-powered machine, then beat Dwight Hughes, Denny Fitt, Dave Uyehara, and Chip Woodall to reach the final. With Wiebe well ahead of him in performance, Johnson apparently reached back a few months into Steve Carbone’s U.S. Nationals-winning handbook and took his time staging. According to Wiebe, the longer staging procedure built too much heat and power into his engine, and – as Garlits did against Carbone --- Wiebe smoked the tires and Johnson raced to victory.

(“Staging last used to be a big thing for me,” he told ND in that 1984 interview. “I had some horrendous staging battles with Jerry Ruth.”)

The win earned them backing from the Washington Dairy Association (“Not a lot of money but we sure could use it.”) and later that year, with the rear-engined movement clearly in control, they had still relatively unknown Al Swindahl build them a dragster just in time to try to defend their title at the ’72 Supernationals. 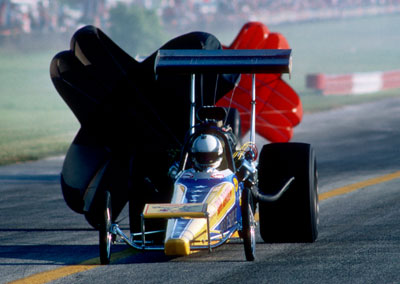 The team entered the first year of what would be a long sponsorship partnership with Mr. Auto Supply (according to Johnson, it was John Jelvick, owner of Mr. Auto Supply, who gave him the “Gentleman” nickname). The car set some track records but again struggled to win as the front-motored holdouts learned how to race their new back-motored machine. The duo enjoyed match-race success with the car, and after a lot of hard work got it lined out and collected Division 6 titles in 1976 and ’77 (and a career-best eighth-place national finish in 1977) and a runner-up behind Jeb Allen at the 1976 Fallnationals in Seattle. They ran the car through the 1978 season before selling it. The car ended up starring in (and dying in) the movie Fast Company, in which it met an explosive end.

A newer Swindahl car followed in 1979, but as Top Fuel match racing began to dry up, Johnson emulated Ruth and reluctantly added a Monza Funny Car to his stable.

“I hated it,” he said. “I couldn’t see and it didn’t go as fast as the dragster. I didn’t care for anything about it except the paychecks.” 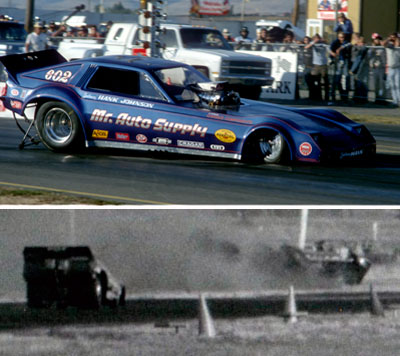 Despite that, before long Johnson was running the Funny Car exclusively, and again found himself a Northwest fan favorite. He experienced great regional success the first two seasons, then built a Dodge Omni-bodied machine that met its maker late in the 1982 season, crashing heavily at the Golden Gate Nationals in Fremont.

“The engine blew and got oil under the tires,” he explained of the first and only serious crash of his career. “I went off the track on the left [no track-lining guardrails at Fremont in those days] and rolled a couple of times. I was a little shaken and wasn’t sure what the future held for me. I was going to gather all of the parts together to build a new car and sell it, but as I was started to work on the car I got my enthusiasm back.”

Swindahl front-halved the damaged chassis and Johnson returned in April 1983 with a Trans Am body, but with alcohol in the tank. He was runner-up to Vern Moats at the U.S. Nationals then kicked off 1984 with a huge win at the Winternationals.

Johnson retired from racing in 1986 to concentrate on his business but has been a regular on the nostalgia racing scene, taking part in numerous Cacklefests with his restored Dailey & Johnson dragster and assisting Bucky Austin on his Nostalgia Funny Car. 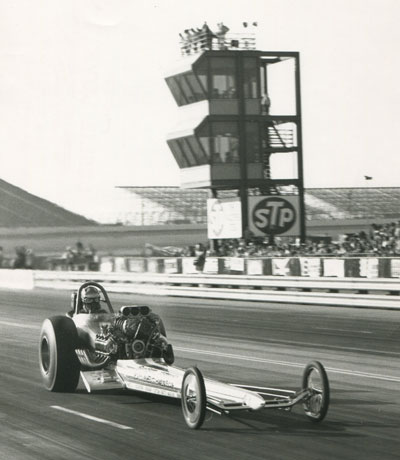 I was thrilled to hear back from Don Long, who shared his memories not just of Johnson, but of that memorable 1971 Supernationals.

“I have two strong memories of Hank Johnson. The first is that Hank was a true gentleman. If there is ever to me a book written about how to be a gentleman, Hank would be the star. Jerry Ruth, who was Hank’s primary competitor for years, told me that he had never seen Hank get mad. That, for me, is a very easy thing to believe.

“The second strong memory has to do with the ’71 Supers. The races were to be the first for the new aluminum Donovan 417 and, like most ‘firsts’ in drag racing, getting it ready for the race meant hard work, long hours, fast food, and prayers. Donovan’s shop was a beehive. They, including John Wiebe, whose dragster was being fit for the new engine, barely got everything done in the eleventh hour; that is everything except the front motor mounts. It seems like Donovan had slightly changed their location on his new block and a pair of new mounts were needed on the chassis. I got ‘the call’ and it was way after bedtime. 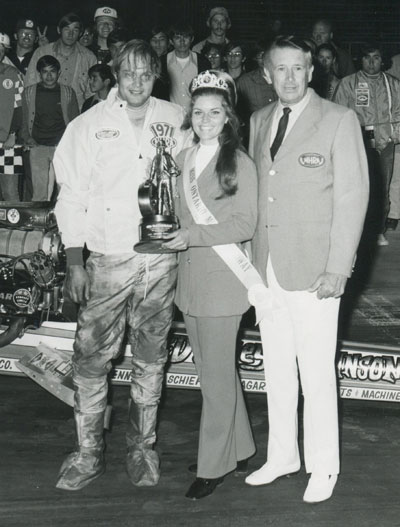 “It took me a few trips back and forth between shops and the making of a ‘saddle-type’ mount to rescue them, and the rest is history, and Wiebe went on to be runner-up to Hank Johnson at the race.

“Another memory from the’71 Supers was when, during eliminations, Hank’s steering started failing. It was binding and as the race progressed the condition grew worse to the point of questioning if the car could continue. Right after the semifinals I got ‘the call’ on this one also. I knew that the first thing to do was to isolate the source so I started by removing the tie rod. I was lucky because removing the tie rod quickly pinned the source down to the right front spindle. The problem turned out to be the spindle bushing galling on the kingpin and this was probably caused by grease lost from over cleaning. A little wrenching, emery paper, and fresh grease fixed the right front and when I found out that we had a little extra time I rapidly serviced the left front also. This pit work allowed Hank to go on to the finals and the rest is history (again)."

Johnson touched a lot of people’s lives, so I was not surprised to hear from two of my Northwest network of pals.

“Flyin’ Phil” Elliott, one of the region’s greatest historians, recounted that his nickname was well-earned. He remembered it as coming from the diary sponsorship rather than from Mr. Auto, but the meaning is still the same. 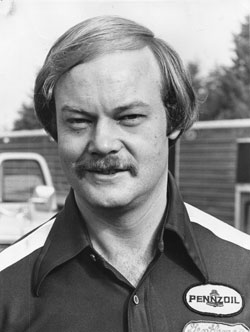 “They said, ‘All you dragster drivers have nicknames; what’s yours?’ He was quiet and almost appeared shy so they came up with ‘Gentleman.’ And listen, he was always among the fairest and most sportsman of the northwest drivers, totally devoted and focused on his trade.

“His cars were always competitive, good looking and popular, sort of in the good guy vs. bad guy scenarios. He was always friendly and helpful.”

Al Kean, who has contributed many memories and photos to this column, also weighed in (as expected) with his memories of Johnson.

“He was at the first big drag race I ever attended (Puyallup's North American Fuel and Gas Championships in 1969) and I was also there when he won the very first side-by-side five-second Top Fuel race in history (against Jeb Allen) at Seattle in 1975. He went on to win that event (1975 NHRA Northwest National Open) and I saw him many, many times over the years.

"But the event that shows what kind of guy he was, is the 1982 NHRA Golden Gate Nationals at Fremont (I was there for that one, too). He crashed his fuel Funny Car into the guardrail almost head-on. This was the first qualifying session on Saturday if I remember correctly. His car was pretty much destroyed, but he didn't pack up and go home. He kept the car in his pit and spent the rest of Saturday and Sunday at the ropes politely speaking with any fan that came by. He was a really classy guy, a real gentleman.”

So, with that, we make a final tip o' the hat to one of drag racing's true gentlemen, and true racers. RIP, "Gentleman Hank."