Gas Ronda, one of Ford's early superstars in the Super Stock ranks in the 1960s and in the early days of Funny Cars, passed away Oct. 25 at 91, but left behind an enduring legacy in the sport.
26 Oct 2017
Phil Burgess, NHRA National Dragster Editor
DRAGSTER Insider

The sport lost another of its early heroes this week with the passing Wednesday of Ford legend Gas Ronda, who was one of the Blue Oval’s early superstars in Super Stock and, later, in Funny Car. He was 91 and had suffered a pair of strokes in 2014 but it  was cancer that ultimately took him from us.

“All of us at NHRA were deeply saddened to learn of Gas Ronda’s passing," said NHRA President Peter Clifford. "He was a pioneer in the early days of funny car racing and will be sorely missed by all who knew him. Our thoughts and prayers are with his family during this difficult time.”

A few years ago, former National Dragster staffer John Jodauga, who grew up a fan in those halcyon days of Super Stock action in the 1960s, authored an article for us about Ronda. As a tribute to this great, I share that article today in memory of another lost hero. 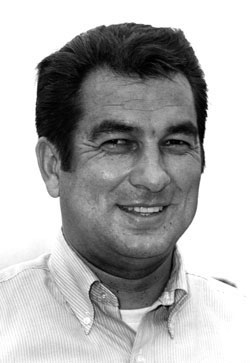 Ford has had many drag racing heroes, ranging from Bob Glidden, Don Nicholson, and Gapp & Roush in the 1960s to John Force in drag racing’s modern era. But the man who got it started in the beginning for the Blue Oval brand was Gas Ronda, the former dance instructor who became Ford’s most respected campaigner during the days of heads-up Super Stock competition and the pioneering years of Funny Car racing.

Ronda's career in drag racing began in the early 1950s, when he drove Hudson and Buick entries while conducting dancing classes in Northern California. He acquired a Chevrolet Corvette in the late 1950s but didn't like that it seemed that everyone else at the tracks ran Chevys, so he switched to a '60 Ford Starliner with a 352-cid, 360-horsepower V-8.

After developing a working relationship with talented tuner Les Ritchey, the owner of the Covina, Calif.-based Performance Associates shop, Ronda was eventually talked into moving to Southern California. He initially ran out of George Newtell’s Downtown Ford in Los Angeles, where he worked as a salesperson. Ronda had one of the quickest and fastest 427-cid-powered lightweight '63 Galaxies in the country, but the car’s inherent extra weight made it difficult to keep pace with the lighter Chevys, Dodges, and Plymouths.

Ford solved that problem in 1964 when it developed the Thunderbolt, a midsize '64 Fairlane with a 427-cid engine shoehorned under the hood. Ronda had relocated to Russ Davis Ford in Covina by this time, again to race and work the showroom floor as a salesperson. He had his Fairlane’s original factory burgundy paint scheme redone in the bright poppy red that was popularized by Ford's new Mustang, and he won the 1964 Hot Rod Magazine Championships en route to the NHRA Stock world championship title.

One thing that set Ronda apart from other racers at the time was his dapper appearance. Taking a cue from his dance-instruction days, Ronda always dressed well at the races.

“We’d work until midday before running a race at Orange County or Irwindale, then I’d send the crew home to clean up and put on fresh uniforms," said Ronda. "We always tried to add a bit more professionalism to drag racing.”

Ronda was given an even more potent ride in 1965, the SOHC 427-cid Ford Mustang that ran mid-10s in A/FX form. However, the Mopar drivers decided to hit the match race trail for no-holds-barred racing with their altered-wheelbase Dodge and Plymouth entries that had been outlawed for A/FX competition, which was the start of the Funny Car revolution. By switching to fuel injection, nitromethane, and later superchargers, they began to run in the nine-second zone and soon dipped into the eights, which overshadowed the 10-second performances of the legal A/FX cars such as Ronda’s Mustang.

Ford officials told Ronda that they would provide him with a factory-designed Funny Car for 1966 if he would finish the 1965 campaign running in A/FX.

“Of all the cars I raced, the 1965 Mustang was the most fun to drive. We felt it was quite a feat to run in the 10s with a manual four-speed transmission,” said Ronda. “But we couldn’t compete with the Funny Cars for the fans’ attention.”

Ronda was nevertheless rewarded for fulfilling Ford’s requests when he was given a stretched wheelbase Mustang that immediately ran deep into the eight-second zone. Tragedy struck when his best friend Ritchey was killed in a racing accident early that year, and Ronda, badly shaken, reverted to a more conservative tune-up for slower nine-second times for several months.

By 1967, however, Ronda had regained his confidence and campaigned a tube-frame Mustang with a tilt front end that began to produce seven-second times when he switched to a supercharger at the end of the year. He was given a brief break from Funny Car action early in 1968 when he was one of the group of drivers handpicked by Ford to drive the first-generation Cobra Jet Mustangs at that year’s Winternationals.

For the 1969 season, Ronda drove a beautiful ’69 Mustang that featured a Logghe Bros. chassis. With this car, he enjoyed the highlight of his career when he upset the touted Chi-Town Hustler of Farkonas, Coil & Minick in the final round of the 1969 Orange County Int’l Raceway Manufacturers Championships.

Ronda’s driving career was brought to a premature end in early 1970 when he suffered severe burns from an engine explosion while racing in Phoenix. The recovery period from the burns was lengthy, and it prevented Ronda from driving in the new Pro Stock category created that year.

With racing no longer an option, Ronda started an entirely new career when he opened a small bar, the Funny Car Tavern, in Azusa, Calif., in 1974 that evolved into a nightclub, the Gas House, in Covina.

“I had to start all over, learning about the new business,” said Ronda. “One thing that helped was that I knew some players from the LA Rams. By inviting them to the club, they attracted a lot more people. We played whatever type of music was popular at the time, from disco to rock 'n' roll. We had two dance floors, three bars, and a roving camera that would put people on the life-size screen. We did very well for the next 18 years.”

The club kept Ronda so busy that he had no time to go to the races. When the lease expired in the early 1990s, he began to attend events such as the NHRA Motorsports Museum California Hot Rod Reunion presented by Automobile Club of Southern California. A big treat for Ronda came when he attended the 2010 NHRA Motorsports Museum Holley National Hot Rod Reunion, where he met up with other members of the original Ford Drag Racing Team, including Dick Brannan and Phil Bonner.

Looking back, Ronda said, “I wouldn’t change a thing. I not only was able to make a living at what I wanted to do, but do it in my own style and manner. I had a tough break with that fire, but I knew the risks that were involved when I got into racing. The good outweighed the bad, and I consider myself to be very fortunate to race at the time that I did.” 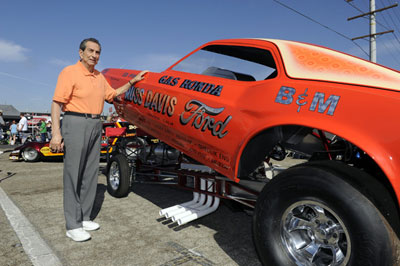 I got a chance to talk to Ronda's son, Gas Jr., on Wednesday to express our condolences and for some remembrances of his father's time. We saw his dad not that long ago, at the 2016 Winternationals, where he posed with a restoration/recreation of one of his early Funny Cars as part of our yearlong 50 years of Funny Car celebration. He still looked good then, which was an enviable trait he possessed.

"A few years ago at the  [NHRA Motorsports Museum], my dad walked up to Don Garlits, who looked at him and asked, 'Don't you ever grow old?' " said his proud son. "For a man in his mid- to late-80s, he was still amazing, standing tall and elegant. Always well-dressed and well-groomed. When people his age were really showing their age, he'd walk into a room looking like Cary Grant."

He also has lot of fond memories of his dad's glory days on the quarter-mile. 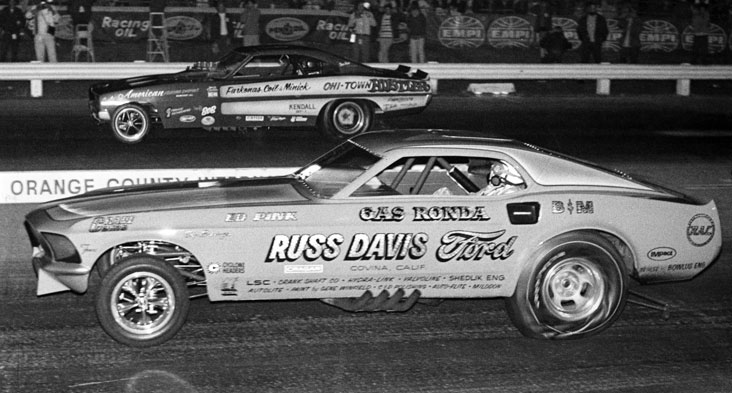 "I was a kid running around the pits, but I got to be part of his racing career," he remembers. "I have great memories of playing with the kids of the other racers, like Larry Fullerton, playing with our toy cars. I remember being able to go with him to all of those great old tracks -- Irwindale, Lions, Orange County -- and vividly remember being on the starting line one at the [1969] Manufacturers Meet at Orange County. We were against the Chi-Town Hustler [in the final round] and everyone thought they were going to beat us because they were the top car. They both took off in a cloud of smoke and we were trying to look through it and then finally seeing our win light come on.

"I also got to go to a lot of the special events that were staged at the museum during the Pomona events and watching people come up to my father, literally shaking in their shoes at the chance to meet him, just thrilled to get his autograph."

Ronda, who was inducted into the International Drag Racing Hall of Fame last year, is survived by his wife, Nina, sons Gas Jr. and John and daughter Tyline, two sisters, and numerous grandchildren and great grandchildren. Services are pending, but the family would like to host a celebration of life in the weeks ahead. I'll keep you informed.