News of the Week

In this week's Dragster Insider: Famous Funny Cars on the auction block, a female pioneer gets her due, and a farewell to a 1970s Pro Stock mainstay.
03 Feb 2017
Phil Burgess, NHRA National Dragster Editor
DRAGSTER Insider
If it's Friday when you’re reading this, I’m in Phoenix for the NHRA Nitro Spring Training preseason testing, getting my first annual whiff of nitro, but I wish I’d have been in Arizona a couple of weekends ago for the Barrett Jackson auction in Scottsdale to watch bidding on three of Don “the Snake” Prudhomme’s Funny Cars from his personal collection. Instead, like many of you I’m guessing, I watched it on TV.
If you remember, in 2014, Prudhomme sold his immaculately restored Hot Wheels 'Cuda and ramp truck and the matching “Mongoose” rig for a cool $1 million. This year he had a trio of cars on the auction block: his Snake II Barracuda, the 1989 Skoal Bandit Trans Am, and the 2007 Skoal Impala. 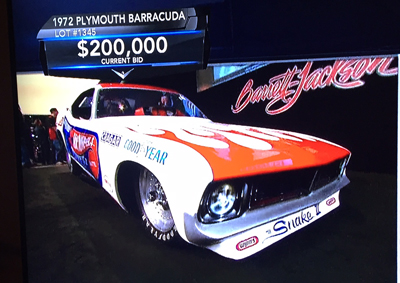 The Buttera-built ‘Cuda, lovingly restored, period correct, and in running condition with an iron-block, iron-head 426 Hemi with its 6-71 supercharger and 3-port Enderle fuel injector “hat,” fetched $200,000. The chassis is the same one that famously “flew” in Seattle in April 1971. Prudhomme ended up selling the car to longtime backer Wynn’s, and it actually ended up in Belgium, where Prudhomme found it and bought it back. It was in pretty rough shape but was lovingly restored. The body on the car is another that belonged to the car and was found largely intact in a warehouse in Washington state. 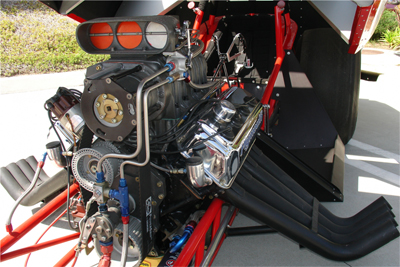 “We went through at least three or four bodies that year,” he recalled. “Back then, we’d go through bodies like underwear. If you blew a blower or caught fire, you just got another body. We changed them all the time."
The Skoal Pontiac, the car in which “the Snake” swept the 1989 Big Bud Shootout and U.S. Nationals before returning to Top Fuel in 1990, sold for $125,000. The final car, the Impala, which was driven by Tommy Johnson Jr. and billed as the last Funny Car Prudhomme campaigned and the last race car ever with a Skoal sponsorship, sold for $92,000.
“I just wanted for them to have a new home,” Prudhomme told me earlier this week. “They’re all grown up and need to go out on their own. The guys who bought them are real fans of the cars themselves — I still have a pretty good fan base, which is nice — so hopefully more people will see them. It’s not like I’m getting rid of them; they’ll still be around for other people to enjoy. They just won’t be in my shop.
“Of course I have some mixed feelings about selling them after all the work we put into them, but I don’t think about it that much. It’s time for me to start buying other people’s cars instead of selling mine. That’s a whole new chapter for me that could be a lot of fun.” 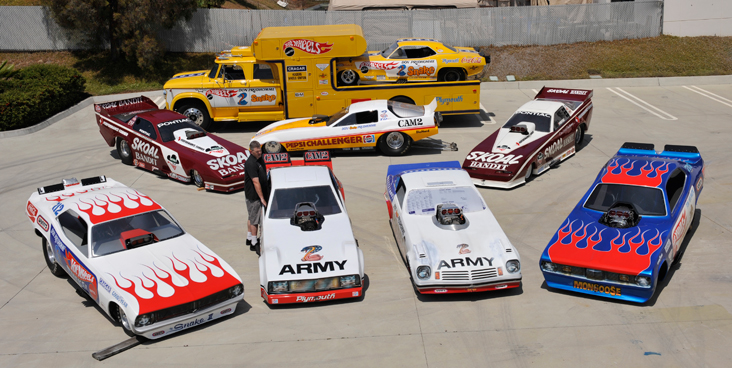 The sale of those three floppers liquidates what was once a pretty impressive collection of fiberglass history, as shown in this 2009 visit that Teresa Long and I took to his SoCal shop. [A fun day to be sure; you can revisit it here, on this semi-archived version of the old NHRA site.] He still has a few of his rear-engined dragsters around, but those, too, will probably be sold in the future. 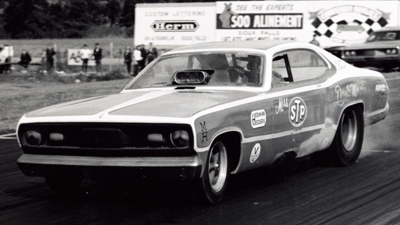 I also wanted to give a shout out to female Funny Car pioneer Paula Murphy, who headlines the seven-person list of auto-racing luminaries who will be inducted into the Motorsports Hall of Fame of America later this year. The list also includes sprint-car giant Steve Kinser; three-time Daytona 200 motorcycle champion Dick Klamfoth; two-time NASCAR Cup champions Terry Labonte and Herb Thomas; and multi-faceted legend Brock Yates.

Murphy played a pivotal role in drag racing's formative years, as the first woman licensed to drive a Funny Car and by becoming a successful match racer through 1972, driving an STP-sponsored ride in an era when few drivers had sponsorships. Because her career began in road racing, that caught the attention of STP’s Andy Granatelli, who brought her to the Bonneville Salt Flats where, in 1963, “Miss STP” set a 161-mph women's land-speed record in a Studebaker Avanti. She later boosted her record to 243.44 mph in Walt Arfons' Avenger jet car.
I wrote a column about her early last year that you can find here.
Congrats, Paula! 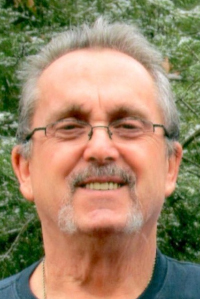 Finally, I learned this week of the passing of Ronnie Manchester, a staple of NHRA Pro Stock racing in the 1970s. He was 72.

Although Manchester was a regular on the tour and a popular East Coast draw, he reached only one final round, late in his career, when he was runner-up to Bob Glidden at the 1986 World Finals. Interestingly, Manchester is best remembered by fans like me for something that he didn’t do on the track.
It was Thursday of the 1977 U.S. Nationals, in the second session of Pro Stock qualifying. Larry Lombardo and team owner Bill Jenkins, the reigning world champs, entered the event trailing Don Nicholson by just more than two rounds’ worth of points. After an opening pass of 8.75 in Thursday’s first qualifying session, Lombardo pulled Jenkins’ Grumpy’s Toy XIII Monza into the right lane for another shot. As he pulled high gear, the right rear wheel rotated inside the tire, cutting its valve stem and leading to an immediate depressurization. 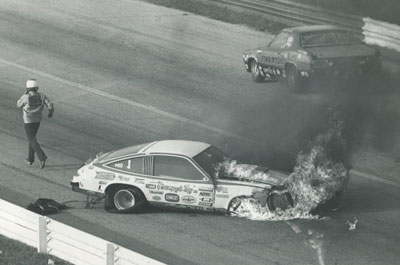 The car spun across the centerline and smacked into the guardrail, which tore loose a fuel line and caught fire. Lombardo hotfooted it away from the car, which burned intensely. He was uninjured, but the Monza was quite literally toast, but perhaps fixable. The damage was then exacerbated by a well-meaning but hamfisted tow truck driver who, because the tires were blown, put a tow strap through the windows and under the cage and ended up buckling the acid-dipped roof.
Rules did not allow another car to be entered by Jenkins and team, but they could use any entry that had already been entered and teched in, and within minutes, Manchester had offered his Westport, Mass.-based Monza, built, like Jenkins’ car, at SRD and a near twin to the Jenkins Monza. It’s hard to fathom someone giving up the chance to race at Indy, a race for which people plan all year long, to help another, but Manchester did. 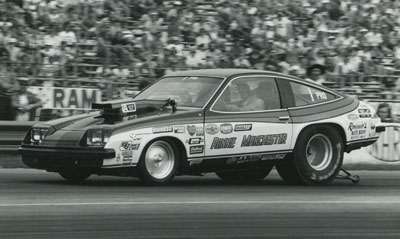 Jenkins and team worked the rest of the day and into Friday to transfer not just their driveline into Manchester’s car, but also some of their suspension components, including the struts and rear shocks, so that their four-link settings would work in the new car.
Lombardo qualified No. 3 with an 8.71 at 157.06 that stood as top speed of the meet. Although Lombardo's hopes for not only an Indy win but also a repeat world championship ended with this tough semifinal loss to Nicholson, few have forgotten Manchester’s selfless sacrifice that week.
That’s it for this week. The Circle K NHRA Winternationals blast off next Thursday and, fair warning, with a busy week ahead, there may not be a column next week (then again, there might be). Either way, stay tuned for more nostalgic fun throughout the year. Thanks for reading.
Phil Burgess can be reached at [email protected].