Of national consciousnesses and Pandora's Box 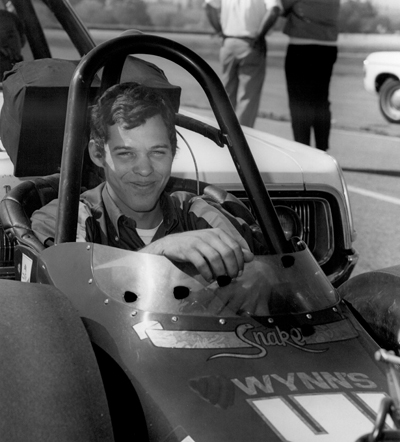 Last week’s column on the many looks of Don Prudhomme’s first Barracuda included the statement that the car was the one “That launched Prudhomme’s name into the national consciousness.”

I quickly heard from Insider regulars Dennis Friend and Robert Nielsen, both identically taking me to task for not crediting that phenomenon to his earlier Top Fuel rides in which he had great success.

“I must take exception to this statement,” wrote Nielsen. “I would counter there are two other cars where Prudhomme made a national name for himself. The first being the Greer-Black-Prudhomme dragster. I think virtually every drag racing fan nationwide knew of this car and its remarkable performance record. Since this car was campaigned primarily in SoCal I might have to give you a pass on this one regarding Prudhomme’s national fame, but the next car Prudhomme drove certainly was seen nationwide. That car being Roland Leong’s Hawaiian dragster. In 1965 Prudhomme won the two of the four NHRA events that year. Those were the two biggest – the Winternationals and [Indy] Nationals. I am willing to bet if you ask any Dragster Insider or drag racing fan about the source of Prudhomme’s fame they will probably point to one of these two cars! This most certainly is where Prudhomme made a name for himself and gained national recognition! Success in these two cars allowed Prudhomme to take the next step in his career. That being solely as a driver to car owner, tuner and driver the following year thus launching his long and victorious career.

“What I will concede, and I think you may have been trying to elude to, is the Mattel deal brought Prudhomme and McEwen to a fan base outside of those that followed drag racing and more into mainstream America.”

That is exactly what I was trying (and, apparently, failing) to say. To me, even though Prudhomme won Pomona and Indy and was included in the ABC Wide World of Sports coverage, and every serious drag racing fan knew about it through the pages of National Dragster or Drag News or other drag mags, Joe and Jane Lunchbucket probably hadn’t heard of “the Snake” and “the Mongoose” until their kids handed them their Christmas lists asking for the Hot Wheels toys. Believe me, when you have two 10-foot long lane of orange plastic track spanning the living-room floor, mom and dad get it. I know mine did.

So, certainly, so slight intended to the amazing G-B-P car or Leong’s similarly almost unbeatable Hawaiian, just a terrible job of explaining what I meant. I exacerbated the problem by using some different (and more precise) wording on the home page teaser story saying it was the car that launched Prudhomme’s Funny Car career, but to me it was more than just that.

Friend added an interesting coda to his umbrage with the wording. “Maybe too knit picky,” he admitted, “but it struck me wrong the first, second, third, and fourth times I read it, but he [already] had the name, and he had a career. When you consider his career as an owner, he actually had three careers. It would be interesting to see which career he is most remembered for if all the data was presented to be viewed, maybe a good idea for a Dragster Insider. 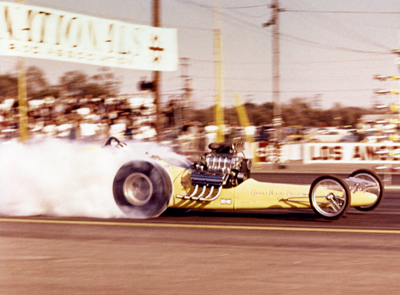 That’s an interesting concept. As a driver, he wheeled the nearly untouchable G-B-P car (236-7, or whatever number you believe) in the early 1960s and he added the Winternationals and Nationals wins in Leong’s car. Then there’s a long, long period through 1994 as driver-owner, and finally as the owner/owner who brought the resources that helped give guys like Larry Dixon, Ron Capps, Tommy Johnson Jr., and Spencer Massey great boost in their careers. I think most of us would say it was that middle period that defined him, but I could be wrong.

My old buddy Nielsen, never one to give me a break (and I love him for that) also took me to task for saying that “The Hot Wheels deal McEwen brokered with toy giant Mattel really opened the Pandora’s Box of possibilities.”

“Why the use of Pandora’s Box? This term usually has a negative connotation. While the Hot Wheels deal may have not been truly the first corporate deal, it certainly was one of the biggest and brought with it a huge influx of financial backing for McEwen and Prudhomme. Was that such a bad thing?

“One might argue these corporate sponsorship deals, like the Mattel deal, caused operating costs for a competitive Top Fuel dragster to skyrocket. In the 1960s, the costs to field a competitive Top Fuel car was measured in the thousands of dollars. Today it is measured in the millions of dollars. This it has made it virtually impossible for anyone without the backing of a huge corporation to not be a competitive drag racer. The result maybe one of the reason there are so few Top Fuel cars showing up at NHRA events today. In the 1960s there were 60 or more Top Fuel cars competing at NHRA on a regular basis. Today this number has decreased to something on the order of roughly 20.

Again, exactly the point I was making, which could have used more explanation, but I thought that everyone got that. I believe that until the day he died, even though he understood that prize money drove entry numbers, Wally Parks wished racers still raced for the trophy and the accomplishment of beating the other guy, which was certainly true in the sport’s infancy. We all understand why that can’t be true, which dovetails into Nielsen’s additional rebuttal.

“The cost of fielding a Top Fuel car probably would also have occurred had there not been any corporate involvement,” he suggested. “Drag racers are by their basic nature innovators. They are ALWAYS seeking ways to improve the performance of their cars to gain a competitive edge. That is the basic nature of the sport of drag racing and will continue to be. With that quest for additional performance comes an increase in cost to obtain it. That is the law of diminishing returns. The only thing that corporate involvement has done was to accelerate the rate of performance change. I think we may have discussed similar issues when you wrote a column about the influence data loggers had on performance improvements. They too, like corporate sponsorship, only increased the velocity of change. The changes resulting from data loggers only allowed drag racers to identify areas where improvements could be made at a faster rate than previous trial and error methods.”

I agree across the board with what he says. Would I love to see the days of 100-car Top Fuel fields return? Heck, yes. Do I think it will ever happen? Heck, no. Although NHRA has done an admirable job of trying to keep costs under control by limiting uber-costly, one-off innovations that only prompted a keep-up-with-the-Jones mentality, the racers are in many ways – and I think most would agree – their own worst enemies when it comes to controlling costs.

Although those big-ticket items have slowed and the work is largely in refinement, there are still trick-of-the-week innovations that fall within the guidelines and become near-must-haves (the new “all-in-one” fuel valve being a recent reminder; the laid-back Funny Car headers another) along with new cylinder heads and blowers, and more.

(By the way, did you see the video on NHRA.com this morning showcasing Don Schumacher Racing’s machine shop? Simply stunning. They can and do produce everything from cylinder heads to blower pulleys and connecting rods --and lots more! -- to feed their army of cars. It’s no doubt a smart (albeit very large) investment that will be recouped in fairly short order, and other teams don’t have to invest similarly to keep up, though many have or will, or they can simply buy the parts from the race teams.

I think a little bit of us old-timers wish we could go back to the days when Funny Cars were known by their name and not their sponsor, but it was those very dollars that helped drive the sports, not just in performance and innovation, but through coordinated marketing with the sponsor, helped further drive drag racing into the mainstream. Pandora’s Box? Yes, for sure, but one I’m glad got opened.